Сталингра́д​ (help·info)), 1925–1961, is an industrial city and the administrative centre of Volgograd Oblast, Russia.[13] The city lies on the western bank of the Volga River. Volgograd was one of the host cities of the 2018 FIFA World Cup.

The Soviets' Battle of Stalingrad against invading German and its allied forces in World War II was one of the largest and bloodiest battles in the history of warfare. Known locally as the "Hero City", Volgograd today is the site of The Motherland Calls, an 85-metre high statue dedicated to the heroes of the battle. The city has many tourist attractions, such as museums, sandy beaches, and a self-propelled floating church. Its population was 1,021,215 at the 2010 Census, growing from 1,011,417 in the 2002 Census. 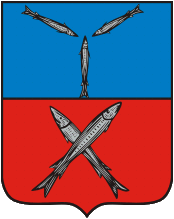 Although the city may have originated in 1555, documented evidence of Tsaritsyn at the confluence of the Tsaritsa [ru] and Volga rivers dates from 1589.[4] Grigori Zasekin established the fortress Sary Su (the local Tatar-language name means "yellow water" or "yellow river") as part of the defences of the unstable southern border of the Tsardom of Russia. The structure stood slightly above the mouth of the Tsaritsa River on the right bank. It soon became the nucleus of a trading settlement.

In 1607 the fortress garrison rebelled for six months against the troops of Tsar Vasili Shuisky. In 1608 the first stone church was built in the city and was dedicated to St. John the Baptist. At the beginning of the 17th century, the garrison consisted of 350 to 400 people.

In 1670 troops of Stepan Razin captured the fortress; they left after a month. In 1708 the insurgent Cossack Kondraty Bulavin (died July 1708) held the fortress. In 1717 in the Kuban pogrom [ru], raiders from the Kuban under the command of the Crimean Tatar Bakhti Gerai [ru] blockaded the town and enslaved thousands in the area. In August 1774 Yemelyan Pugachev unsuccessfully attempted to storm the city.

In 1691 Moscow established a customs-post at Tsaritsyn. In 1708 Tsaritsyn was assigned to the Kazan Governorate; in 1719[citation needed] to the Astrakhan Governorate. According to the census in 1720, the city had a population of 408 people. In 1773 the settlement was designated as a provincial and district town. From 1779 it belonged to the Saratov Viceroyalty. In 1780 the city came under the newly established Saratov Governorate. 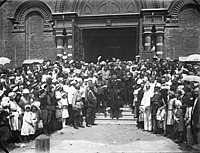 In the nineteenth century, Tsaritsyn became an important river-port and commercial centre. The population expanded rapidly, increasing from fewer than 3,000 people in 1807 to about 84,000 in 1900. The first railway reached the town in 1862. The first theatre opened in 1872, the first cinema in 1907. In 1913 Tsaritsyn got its first tram-line, and the city's first electric lights were installed in the city centre.

During the Russian Civil War of 1917–1923, Tsaritsyn came under Soviet control from November 1917. In 1918 White Movement troops under Pyotr Krasnov, the Ataman of the Don Cossack Host, besieged Tsaritsyn. The Reds repulsed three assaults by the Whites. However, in June 1919 the White Armed Forces of South Russia, under the command of General Denikin, captured Tsaritsyn, and held it until January 1920. The fighting from July 1918 to January 1920 became known as the Battle for Tsaritsyn.

On April 10, 1925, the city was renamed Stalingrad, in honour of Joseph Stalin, General Secretary of the Communist Party.[14][15] This was officially to recognise the city and Stalin's role in its defence against the Whites between 1918 and 1920.[16] In 1931, the German settlement-colony Old Sarepta (founded in 1765) became a district of Stalingrad. Renamed Krasnoarmeysky Rayon (or "Red Army District"), it was the largest area of the city.

Under Stalin, the city became a centre of heavy industry and transshipment by rail and river. During World War II, German and Axis forces attacked the city, and in 1942 it was the site of one of the pivotal battles of the war. The Battle of Stalingrad had perhaps the greatest casualty figures of any single battle in the history of warfare (estimates are between 1,250,000[17] and 1,798,619[18]).

The centre of Stalingrad after liberation in 1943 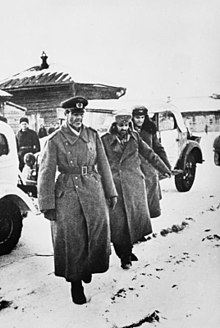 Paulus (left) and his aides Lt.-Gen. Arthur Schmidt (middle) and Col. Wilhelm Adam (right) after their surrender in Stalingrad. 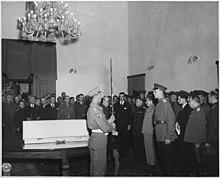 The presentation of the Sword of Stalingrad at the Tehran Conference

The battle began on August 23, 1942, and on the same day, the city suffered heavy aerial bombardment that reduced most of it to rubble. By September, the fighting reached the city centre. The fighting was of unprecedented intensity; the city's central railway station changed hands thirteen times, and the Mamayev Kurgan (one of the highest points of the city) was captured and recaptured eight times.

By early November, the German forces controlled 90 percent of the city and had cornered the Soviets in two narrow pockets, but they were unable to eliminate the last pockets of Soviet resistance before Soviet forces launched a huge counterattack on November 19. This resulted in the Soviet encirclement of the German Sixth Army and other Axis units. On January 31, 1943 the Sixth Army's commander, Field Marshal Friedrich Paulus, surrendered, and by February 2, with the elimination of straggling German troops, the Battle of Stalingrad was over.

A number of cities around the world (especially those that had suffered similar wartime devastation) established sister, friendship, and twinning links (see list below) in the spirit of solidarity or reconciliation. One of the first "sister city" projects was that established during World War II between Stalingrad and Coventry in the United Kingdom; both had suffered extensive devastation from aerial bombardment.

City tram on Gogolya Street in 1914 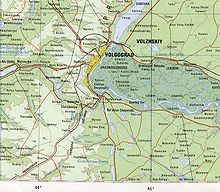 Building of the Oblast Duma

On 10 November 1961, Nikita Khrushchev's administration changed the name of the city to Volgograd ("Volga City") as part of his programme of de-Stalinisation following Stalin's death. He was trying to reduce the "cult of personality". This action was and remains somewhat controversial, because Stalingrad has such importance as a symbol of resistance during World War II.

During Konstantin Chernenko's brief administration in 1984, proposals were floated to revive the city's historic name for that reason. There is a strong degree of local support for a reversion, but the Russian government has not accepted such proposals.

On May 21, 2007, the Communist Party obtained an important success in the Volgograd mayoral election.[citation needed] Communist candidate Roman Grebennikov was elected as mayor with 32.47% of the vote, a plurality. Grebennikov is Russia's youngest mayor of a federal subject administrative centre.

In 2010, Russian monarchists and leaders of the Orthodox organisations demanded that the city should take back its original name of Tsaritsyn, but the authorities rejected their proposal.

In addition, 50,000 people signed a petition to Vladimir Putin, asking that the city's name be permanently changed to Stalingrad.[21] President Putin has replied that such a move should be preceded by a local referendum and that the Russian authorities will look into how to bring about such a referendum.[23]

On August 24, 2004, the Volga-AviaExpress Flight 1353,[24] a Tupolev Tu-134 aircraft flying from Moscow to Volgograd, exploded in mid-air and crashed as a result of a suicide terrorist attack. 34 passengers and 9 crew members were on board the aircraft, all of whom died in the crash. A Siberia Airlines flight bound for Sochi that day was also bombed, killing all 46 who were on board.

At approximately 2:00 p.m. on Monday 21 October 2013, Russian intelligence officers reported a bomb carried by a female suicide bomber exploded on a passenger bus carrying forty people, when it was stopped at the Lesobaza bus stop.[25] Irina Gogolyeva, a spokesperson from the Russian Emergency Situations Ministry, reported that at least five people died in the blast and seventeen others were injured.[26] On October 22, 2013, Vladimir Markin from Russia's investigative Committee reported that the suicide bomber had been identified as 30-year-old Naida Asiyalova of Dagestan.[27]

On December 29, 2013, a suicide bomb attack occurred at the Volgograd railway station, killing at least seventeen people. It is not clear how many bombers were involved or who they were.[28] The following day a suicide bombing on a trolleybus killed at least fifteen people.[29]

In 2011, the City Duma cancelled direct election of the mayor and confirmed the position of City Manager. This was short-lived, as in March 2012, Volgograd residents voted for relevant amendments to the city charter to reinstate the direct mayoral elections.[30] 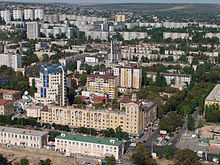 Modern Volgograd remains an important industrial city. Industries include shipbuilding, oil refining, steel and aluminum production, manufacture of machinery and vehicles, and chemical production. The large Volgograd Hydroelectric Plant is a short distance to the north of Volgograd.

Volgograd is a major railway junction served by the Privolzhskaya Railway. Rail links from the Volgograd railway station include Moscow; Saratov; Astrakhan; the Donbas region of Ukraine; the Caucasus and Siberia. It stands at the east end of the Volga–Don Canal, opened in 1952 to link the two great rivers of Southern Russia. European route E40, the longest European route connecting Calais in France with Ridder in Kazakhstan, passes through Volgograd. The M6 highway between Moscow and the Caspian Sea also passes through the city. The Volgograd Bridge, under construction since 1995, was inaugurated in October 2009.[32] The city river terminal is the centre for local passenger shipping along the Volga River.

The Volga River still is a very important communication channel.

Volgograd has a hot-summer humid continental climate (Köppen: Dfa).[34] The city is only slightly warmer than Minneapolis (both in summer and winter, but transitional seasons are almost identical) at the same time that despite being taxed "moist" is drier than most of the climate of group D due to proximity to the Middle East and Central Asia.[35] 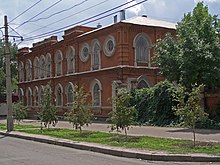 A memorial complex commemorating the battle of Stalingrad, dominated by an immense allegorical sculpture The Motherland Calls, was erected on the Mamayev Kurgan, the hill that saw some of the most intense fighting during the battle.

The Panorama Museum sited on the Volga contains artifacts from World War II. These include a panoramic painting of the battlefield from the location of the monument on Mamayev Kurgan. A rifle of the famous sniper Vasily Zaytsev is also on display.

The Musical Instrument Museum is a branch of the Volgograd regional Museum of local lore.

Aerial view of the Volgograd Arena in 2018

Volgograd was a host city to four matches of the FIFA World Cup in 2018. A new modern stadium, Volgograd Arena, was built for this occasion on the bank of the Volga River to serve as the venue. The stadium has a seating capacity for 45,000 people, including a press box, a VIP box and seats for people with limited mobility.

Volgograd is twinned with:[41]