A Volaris A319 at Morelia International Airport. 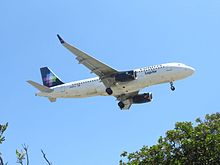 A Volaris A320 landing at Los Angeles International Airport.

Volaris, legally Concesionaria Vuela Compañía de Aviación, S.A.B. de C.V. (BMV: VOLAR, NYSE: VLRS), is a Mexican low-cost airline based in Santa Fe, Álvaro Obregón, Mexico City with its hubs in Guadalajara, Mexico City, and Tijuana, and focus cities in Cancún, León, Los Angeles, and Monterrey. It is the country's second largest airline after Aeroméxico and serves domestic and international destinations within the Americas. It is the leading airline in the Mexican domestic airline market, with a market share of over 28% of domestic traffic.[3]

The pre-operations phase (founding of the legal entities and setting up of the required infrastructure) started in August 2005 under the name Vuela Airlines. The idea for the airline was formed from the proposed "Vuelamex" project.[4] Major initial shareholders of the company were Grupo Televisa (the world's biggest Spanish-language media conglomerate), Inbursa (an insurance company owned by multi-billionaire Carlos Slim), TACA Airlines and the Discovery Americas Fund. Each of these partners invested 25% of the initial cost of activities, or 100 million USD. In July 2010,[5] it was announced that Televisa and Inbursa had sold their stake in Volaris leaving the ownership of Volaris as follows: TACA Airlines with Roberto and Maria Cristina Kriete (50%), Investment fund Discovery Americas (over 25%) and Indigo Partners: Fund led by former America West CEO B. Franke.

Ticket sales started on January 12, 2006, and, following the delivery of the airline's first aircraft, the first (non-commercial) flight was operated in February 2006. Scheduled revenue flights were launched on March 13, 2006, with the inaugural flight having been operated from Toluca to Tijuana.

Initially, the airline avoided flying to Mexico City because of it being a congested and expensive airport. The airline took over several slots that had been owned by now-defunct Mexicana and its subsidiaries MexicanaClick and MexicanaLink, establishing service in September 2010. In March 2011, it announced that its hub in Toluca would move to Guadalajara.

On June 5, 2012, the airline launched a frequent flyer program called VClub.[6] It is the membership program that provides special fares, offers, last minute travel deals and other perks. Customers can save up to 40% using the VClub membership. On June 6, 2012, PayPal became a payment alternative for the airline, enabling customers to purchase tickets directly from the airline's website.[7] On September 17, 2012, Volaris announced a codeshare partnership with a German airline, Condor. Passengers of Condor are able to fly to more international destinations.[8]

On March 13, 2013, the airline celebrated its seventh anniversary, offering passengers 70% off all flights, it has done this every year since then.[9] Volaris announced the creation of a subsidiary, Volaris Costa Rica, in March 2016.[10][11] The subsidiary, based at Juan Santamaría International Airport in Costa Rican capital San José, started operations in November 2016.[12]

In April 2009, Volaris announced the start of U.S.-bound flights out of Toluca and Guadalajara (initially to Los Angeles and Oakland) to feed into the hubs of Southwest Airlines. Later on, U.S. flights were also offered from Zacatecas and Morelia, with Monterrey-Los Angeles and Fresno in planning.

On February 25, 2011, it was announced that Volaris would begin service to Fresno on April 14, 2011. Fresno was Volaris' first US destination where it did not partner with Southwest Airlines. The airline began using Guadalajara International Airport as an American gateway hub in late 2011.

Volaris sought permission to fly between Dallas/Fort Worth and Mexico City, along with a number of other U.S.-Mexico routes. Volaris submitted the request on February 3, 2011 and the U.S. Department of Transportation granted approval on February 11.[13] However, Volaris did not launch the service until over four years later, on April 29, 2015, when it began flights between Dallas/Fort Worth and Guadalajara.[14]

Volaris received approval to fly to San Diego International Airport on July 12, 2012. Volaris then began non-stop flights between Orlando and Guadalajara on July 14, 2012.[15]

Volaris started service between Sacramento and Guadalajara on November 15, 2012. Volaris began flights between Denver and Mexico City on December 8, 2012.

On February 22, 2013, Volaris and Southwest stopped codesharing. Southwest decided to focus more on the Mexican market with AirTran Airways, instead of codesharing with Volaris.[16][17]

Volaris began flights between Phoenix and Guadalajara on October 19, 2013.

Volaris began flying to its first destination in Texas, San Antonio, from Guadalajara on December 14, 2013.[18] Volaris also started its new route from Mexico City to San Antonio on September 15, 2017.

Volaris began flights between Guadalajara and Ontario, California, a reliever airport in the Greater Los Angeles Area, on April 12, 2014.[20]

Volaris applied to fly Mexicana's former Portland to Guadalajara route. The application was granted and service to Portland began on October 6, 2014.[21]

Volaris planned to launch service to William P. Hobby Airport in Houston, Texas as soon as the new terminal was completed,[24] but the airline chose to begin flying to Houston-Intercontinental from Guadalajara on March 26, 2015, instead.[25]

In the summer of 2015, Volaris launched its first ever international flights outside the Continental United States; to Guatemala on June 18,[27] to San Juan, Puerto Rico on July 2,[28] and to San José, Costa Rica on September 10.[29]

Volaris began the first service link between Austin and Guadalajara on August 7, 2016.[30]

Volaris has confirmed it does not plan to fly to Santiago de Chile,[33] and rather focus in the US, Central America and domestic markets, after a local newspaper announced the airline had plans to begin operations in South America.[34]

In March 2017, Volaris began non-stop service between Guadalajara and Milwaukee.[35]

On November 17, 2018, Volaris started flights to Albuquerque from Guadalajara. Volaris was the first Mexican airline to fly to Albuquerque since Aeroméxico in 2009.[36] This flight was discontinued in June 2019, along with a very short-lived (2 week) Albuquerque-Chihuahua flight [37]

On November 22, 2018, Volaris started flights to Charlotte from Guadalajara.[38]

The airline is headquartered in Santa Fe, Álvaro Obregón, Mexico City.[39] It formerly had its headquarters on the first floor of Prolongación Paseo de la Reforma 490 in Peña Blanca, Santa Fe.[40]

Volaris has received several awards, such as for being among the most punctual airlines in Mexico and the world.[41][42] The airline has also received the ESR (Social Corporate Responsibility) award consecutively since 2010.[43]

As of August 2020[update], the Volaris fleet consists of the following aircraft:[47]

Volaris became the first North American operator of the Airbus A320neo in September 2016.[48]

Cabin and onboard services

Volaris does not provide complimentary meals or drinks on its flights. Passengers may purchase items on board from the "Entre nubes" buy on board program.[50] Onboard sales are an important part of the airline's ancillary revenue; items such as snacks, pillows, blankets and Volaris-branded items are sold on board.[51] The airline's monthly inflight magazine is called "V de Volaris".[52]

The airline had previously provided in-flight entertainment (IFE) in most aircraft, utilizing drop-down screens on its Airbus aircraft; by 2019, all use of IFE had been discontinued.[53]

The Volaris logo, since its launch in 2005, has been a colorful, pixelated star against a black background.[58] It represents the north star, Polaris, after which the airline's name is derived from.[59]

Volaris has used several slogans over the years: