Vojvoda (Serbia and Yugoslavia) Byzantine Empire Latin
For other uses of "voivod", "voyevoda", etc., see Voivode of Transylvania, Voivodes of the Polish–Lithuanian Commonwealth, and Voivode (disambiguation).

Voivode, Vojvoda or Wojewoda (/ˈvɔɪˌvoʊd/, also Воевода/Voyevoda, Войвода/Wojwoda, Войвода/Wojwoda), etc. is a Slavic title denoting a "war-leader" or "warlord" in Central, Eastern and Southern Europe since the Early Middle Ages. During the Byzantine Empire it referred to military commanders mainly of Slavic populations.

Voivode, Vojvoda or Wojewoda is a term with two roots, firstly, voi related to warring and secondly, vod meaning leading in Old Slavic, together denoting a "war-leader" or "warlord". The Latin translation is comes palatinus for the principal commander of a military force, deputising for the monarch. In early Slavic vojevoda meant the bellidux the military leader in battle. The term has also spread to non-Slavic languages in the area like Hungarian and Romanian.

During the Byzantine Empire it referred to military commanders mainly of Slavic populations, especially in the Balkans, the Bulgarian Empire being the first permanently established Slavic state in the region. The title voevodas (Greek: βοεβόδας) originally occurs in the work of the 10th-century Byzantine emperor Constantine VII in his De Administrando Imperio in reference to Hungarian military leaders.[1][2]

The title was used in medieval Bohemia, Bosnia, Bulgaria, Croatia, Greece, Hungary, Macedonia, Moldavia, Poland, Rügen, Russian Empire, Ukraine, Serbia, Transylvania and Wallachia[3][1] In the Late Middle Ages the voivode, Latin translation is comes palatinus for the principal commander of a military force, deputising for the monarch gradually became the title of territorial governors in Poland, Hungary and the Czech lands and in the Balkans.[4]

The Serbian Autonomous Province of Vojvodina descends from the Serbian Vojvodina with Stevan Šupljikac as Vojvoda or Duke that became later Voivodeship of Serbia and Banat of Temeschwar.

Epaulettes for the rank Voivode (Serbia)

Kingdom of Serbia and Yugoslavia

In the Kingdom of Serbia the highest military rank was Vojvoda, Vojvoda (Serbia and Yugoslavia). After the Second World War, the newly formed Yugoslav People's Army stopped using the royal ranking system, making the name obsolete.[5]

Title of nobility and provincial governorship

The transition of the voivode from military leader to a high ranking civic role in territorial administration (Local government) occurred in most Slavic countries and in the Balkans in the Late Middle Ages. They included Bulgaria, the Czech lands, Moldavia, Poland and Ukraine. Moreover in the Czech lands, but also in the Balkans, it was an aristocratic title corresponding to dux, Duke or Knyaz.[citation needed] Many noble families of the Illyricum still use this title despite the disputes about the very existence of nobility in the Balkans. 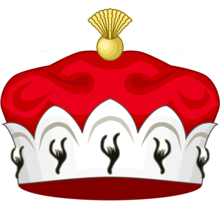 In the 16th-century Commonwealth of Two Nations the Wojewoda was a civic role of senatorial rank and neither heritable nor a title of nobility. His powers and duties depended on his location. The least onerous role was in Ruthenia while the most powerful wojewoda was in Royal Prussia. The role began in the crown lands as that of an administrative overseer, but his powers were largely ceremonial. Over time he became a representative in the local and national assemblies, the Sejm. His military functions were entirely reduced to supervising a Mass mobilization and in practice he ended up as little more than overseer of weights and measures.

Appointments to the role were usually made until 1775 by the King. The exceptions were the voivodes of Polock and Vitebsk who were elected by a local poll of male electors for confirmation by the monarch. In 1791 it was decided to adopt the procedure throughout the country but the Partitions of Poland put a stop to it.[6]. Polish voivodes were subject to the Law of Incompatibility (1569) which prevented them from simultaneously holding ministerial or other civic offices in their area.[7]

The role was revived during the Second Polish Republic after Poland regained her independence in 1918.[8]

Voivodes continue to have a role in local government in Poland today, as overseers of self-governing local councils, answerable not to the local electorate but as representatives/emissaries of the central government's Council of Ministers. They are appointed by the Chairman of the Council of Ministers and among their main tasks are budgetary control and supervision of the administrative code.[9]

The progressive metal band Voivod is named after Michel Langevin's story about a "post-apocalyptic vampire".[10] Vlad III Dracula, who inspired many vampire stories, was the Voivode of Wallachia. It is likely that his title was the origin for the name of Langevin's character and, later, his band.