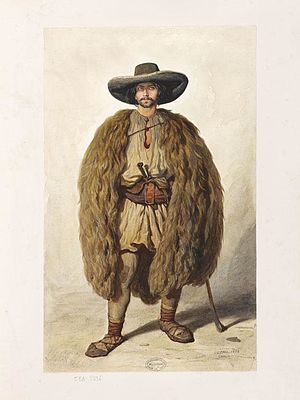 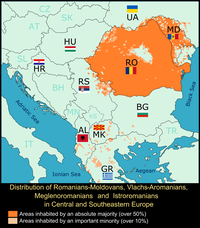 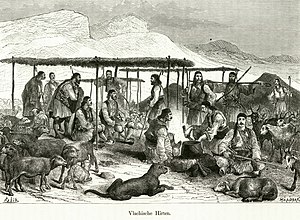 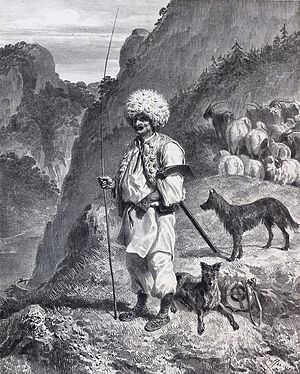 Vlachs (English: /ˈvlɑːk/ or /ˈvlæk/, or rarely /ˈvlɑːx/), also Wallachians (and many other variants[1]), is a historical term from the Middle Ages that designates an exonym, mostly for the Romanians who lived north and south of the Danube.[2]

As a contemporary term, in the English language, the Vlachs are the Balkan Romance-speaking peoples who live south of the Danube in what are now eastern Serbia, southern Albania, northern Greece, North Macedonia, and southwestern Bulgaria, as native ethnic groups, such as the Aromanians, Megleno-Romanians (Macedoromanians), and Macedo-Vlachs.[3] The term also became a synonym in the Balkans for the social category of shepherds,[4] and was also used for non-Romance-speaking peoples, in recent times in the western Balkans derogatively.[5] There is also a Vlach diaspora in other European countries, especially Romania, as well as in North America and Australia.[3]

"Vlachs" were initially identified and described during the 11th century by George Kedrenos. According to one origin theory, modern Romanians, Moldovans and Aromanians originated from Dacians.[6] According to some linguists and scholars, the Eastern Romance languages prove the survival of the Thraco-Romans in the lower Danube basin during the Migration Period[7] and western Balkan populations known as "Vlachs" also have had Romanized Illyrian origins.[8]

The word Vlach/Wallachian (and other variants such as Vlah, Valah, Valach, Voloh, Blac, oláh, Vlas, Ilac, Ulah, etc.[1]) is etymologically derived from the ethnonym of a Celtic tribe,[5] adopted into Proto-Germanic *Walhaz, which meant "stranger", from *Wolkā-[10] (Caesar's Latin: Volcae, Strabo and Ptolemy's Greek: Ouolkai).[11] Via Latin, in Gothic, as *walhs, the ethnonym took on the meaning "foreigner" or "Romance-speaker",[11] and was adopted into Greek Vláhi (Βλάχοι), Slavic Vlah, Hungarian oláh and olasz, etc.[12][13] The root word was notably adopted in Germanic for Wales and Walloon, and in Switzerland for Romansh-speakers (German: Welsch),[5] and in Poland Włochy or in Hungary olasz became an exonym for Italians.[11][1] The Slovenian term Lahi has also been used to designate Italians.[14]

Historically, the term was used primarily for the Romanians.[1][3] Testimonies from the 13th to 14th centuries show that, although in the European (and even extra-European) space they were called Vlachs or Wallachians (oláh in Hungarian, Vláchoi (βλάχοι) in Greek, Volóxi (воло́хи) in Russian, Walachen in German, Valacchi in Italian, Valaques in French, Valacos in Spanish), the Romanians used for themselves the endonym "Rumân/Român", from the Latin "Romanus" (in memory of Rome).[1] Vlachs are referred in late Byzantine documents as Bulgaro-Albano-Vlachs ("Bulgaralbanitoblahos"), or Serbo-Albano-Bulgaro-Vlachs[15]

Via both Germanic and Latin, the term started to signify "stranger, foreigner" also in the Balkans, where it in its early form was used for Romance-speakers, but the term eventually took on the meaning of "shepherd, nomad".[5] The Romance-speaking communities themselves however used the endonym (they called themselves) "Romans".[16] Term Vlach can denote various ethnic elements: "Slovak, Hungarian, Balkan, Transylvanian, Romanian, or even Albanian". [17]

During the early history of the Ottoman Empire in the Balkans, there was a military class of Vlachs in Serbia and Ottoman Macedonia, made up of Christians who served as auxiliary forces and had the same rights as Muslims, but their origin is not entirely clear.[4] Some Greeks used “vlachos” as a pejorative term. The term "Vlachs" can be used in the whole Balkan area in a derogatory way because nomads are traditionally considered "dirty" and "aggressive". Some Croats used that term for Serbs, the city dwellers, the country people and so on.[18] While the Hapsburgs called all Orthodox settlers Vlachs.[19] [20] In Bosnia and Herzegovina the Bosnians called inhabitants of Dubrovnik as Vlachs, in Žumberak members of the Greek Catholic Church were called Vlachs, in Carniola residents of Žumberak in general were Vlachs. In Posavina and Bihać area Muslims called Vlachs as Christians (both Orthodox and Catholics) while Catholics under that name consider Orthodox Christians. For residents of the Dalmatian islands Vlachs are population which live in the Biokovo area, Kajkavian inhabitants of northwestern Croatia all Shtokavian immigrants (either Croats or Serbs) call as Vlachs. The name Vlach in Dalmatia also has negative connotations ie "newcomer", "peasant", "ignorant" while in Istria the ethnonym Vlach is used to make a distinction between the native Croats and newly settled Istro-Romanian and Slavic population which coming in the 15th and 16th century.[21]

Romanian scholars have suggested that the term Vlach appeared for the first time in the Eastern Roman Empire and was subsequently spread to the Germanic- and then Slavic-speaking worlds through the Norsemen (possibly by Varangians), who were in trade and military contact with Byzantium during the early Middle Ages (see also Blakumen).[22][23]

Nowadays, the term Vlachs (also known under other names, such as "Koutsovlachs", "Tsintsars", "Karagouni", "Chobani", "Vlasi", etc.[24]) is used in scholarship for the Romance-speaking communities in the Balkans, especially those in Greece, Albania and North Macedonia.[25][26] In Serbia the term Vlach (Serbian Vlah, plural Vlasi) is also used to refer to Romanian speakers, especially those living in eastern Serbia.[3] Aromanians themselves use the endonym "Armãn" (plural "Armãni") or "Rãmãn" (plural "Rãmãni"), etymologically from "Romanus", meaning "Roman". Megleno-Romanians designate themselves with the Macedonian form Vla (plural Vlaš) in their own language.[3]

See also: History of Romania, Origin of the Romanians, and History of the Aromanians 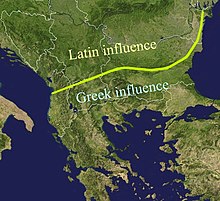 The Jireček Line between Latin- and Greek-language Roman inscriptions 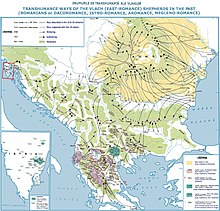 Transhumance paths of the Vlach shepherds of the past

The Hellenic chronicle could possibly qualify to the first testimony of Vlachs in Pannonia and Eastern Europe during the time of Attila.[27][28][29]

The 7th century Byzantine historiographer Theophylact Simocatta wrote about “Blachernae” in connection with some historical data of the 6th century, during the reign of Byzantine Emperor Maurice.[33]

First precise data about Vlachs are in connection with the Vlachs of the Rynchos river; the original document containing the information is from the Konstamonitou monastery.[34]

During the late 9th century the Hungarians invaded the Carpathian Basin, where the province of Pannonia was inhabited by the "Slavs [Sclavi], Bulgarians [Bulgarii] and Vlachs [Blachii], and the shepherds of the Romans [pastores Romanorum]" (sclauij, Bulgarij et Blachij, ac pastores romanorum —according to the Gesta Hungarorum, written around 1200 by the anonymous chancellor of King Béla III of Hungary.[35]

Chroniclers John Skylitzes and George Kedrenos wrote that in 971, during battles between Romans and Varangians led by Sveinald (Sviatoslav), the dwellers of the north side of Danube came to Emperor John I Tzimiskes and they handed over their fortresses and the Emperor sent troops to guard the fortresses. During those times, Northern part of Danube were dwelled by sedentary Vlachs and tribes of nomad Pechenegs who lived in tents.[36]

George Kedrenos mentioned about Vlachs in 976. The Vlachs were guides and guards of Roman caravans in Balkans. Between Prespa and Kastoria they met and fought with a Bulgarian rebel named David. The Vlachs killed David in their first documented battle.

Mutahhar al-Maqdisi, "They say that in the Turkic neighbourhood there are the Khazars, Russians, Slavs, Waladj, Alans, Greeks and many other peoples."[37]

Byzantine writer Kekaumenos, author of the Strategikon (1078), described a 1066 revolt against the emperor in Northern Greece led by Nicolitzas Delphinas and other Vlachs.[40]

The names Blakumen or Blökumenn is mentioned in Nordic sagas dating between the 11th–13th centuries, with respect to events that took place in either 1018 or 1019 somewhere at the northwestern part of the Black Sea and believed by some to be related to the Vlachs.[41][42]

In the Bulgarian state of the 11th and 12th century, Vlachs live in large numbers, and they were equals to the Bulgarian population.[43]

The Russian Primary Chronicle, written in ca. 1113, wrote when the Volochi (Vlachs) attacked the Slavs of the Danube and settled among them and oppressed them, the Slavs departed and settled on the Vistula, under the name of Leshi.[44] The Hungarians drove away the Vlachs and took the land and settled there.[45][46] 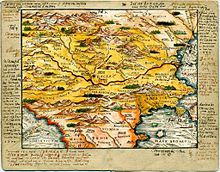 Traveler Benjamin of Tudela (1130–1173) of the Kingdom of Navarre was one of the first writers to use the word Vlachs for a Romance-speaking population.[47]

Byzantine historian John Kinnamos described Leon Vatatzes' military expedition along the northern Danube, where Vatatzes mentioned the participation of Vlachs in battles with the Magyars (Hungarians) in 1166.[48][49]

In 1213 an army of Romans (Vlachs), Transylvanian Saxons, and Pechenegs, led by Ioachim of Sibiu, attacked the Bulgars and Cumans from Vidin.[50] After this, all Hungarian battles in the Carpathian region were supported by Romance-speaking soldiers from Transylvania.[51]

At the end of the 13th century, during the reign of Ladislaus the Cuman, Simon de Kéza wrote about the Blacki people and placed them in Pannonia with the Huns.[52][53] Archaeological discoveries indicate that Transylvania was gradually settled by the Magyars, and the last region defended by the Vlachs and Pechenegs (until 1200) was between the Olt River and the Carpathians.[54][55]

Shortly after the fall of the Olt region, a church was built at the Cârța Monastery and Catholic German-speaking settlers from Rhineland and Mosel Valley (known as Transylvanian Saxons) began to settle in the Orthodox region.[56] In the Diploma Andreanum issued by King Andrew II of Hungary in 1224, "silva blacorum et bissenorum" was given to the settlers.[57] The Orthodox Vlachs spread further northward along the Carpathians to Poland, Slovakia, and Moravia and were granted autonomy under Ius Vlachonicum (Walachian law).[58]

In 1285 Ladislaus the Cuman fought the Tatars and Cumans, arriving with his troops at the Moldova River. A town, Baia (near the said river), was documented in 1300 as settled by the Transylvanian Saxons (see also Foundation of Moldavia).[59][60] In 1290 Ladislaus the Cuman was assassinated; the new Hungarian king allegedly drove voivode Radu Negru and his people across the Carpathians, where they formed Wallachia along with its first capital Câmpulung (see also Foundation of Wallachia).[61]

The biggest caravan shipment between Podvisoki in Bosnia and Republic of Ragusa was recorded on August 9, 1428 where Vlachs transported 1500 modius of salt with 600 horses.[62][63] In the 14th century royal charters include and some segregation policies declaring that "a Serb shall not marry a Vlach."[64] Although this could be related to the term of the same origin, used for dependent shepherds of that time, like in the Dušan's Code, since the dependent population was encouraged to switch to agriculture, it being of more worth to the crown.

Little Wallachia in Croatia and Bosnia

In addition to the ethnic groups of Aromanians, Megleno-Romanians, and Istro-Romanians who emerged during the Migration Period, other Vlachs could be found as far north as Poland, as far west as Moravia and Dalmatia.[65] In search of better pasture, they were called Vlasi or Valaši by the Slavs. States mentioned in medieval chronicles were:

Regions and places are:

As national states appeared in the area of the former Ottoman Empire, new state borders were developed that divided the summer and winter habitats of many of the pastoral groups. During the Middle Ages, many Vlachs were shepherds who drove their flocks through the mountains of Central and Eastern Europe. Vlach shepherds may be found as far north as southern Poland (Podhale) and the eastern Czech Republic (Moravia) by following the Carpathians, the Dinaric Alps in the west, the Pindus Mountains in the south, and the Caucasus Mountains in the east.[72]

Some researchers, like Bogumil Hrabak and Marian Wenzel, theorized that the origins of Stećci tombstones, which appeared in medieval Bosnia between 12th and 16th century, could be attributed to Vlach burial culture of Bosnia and Herzegovina of that times.[73]

According to Ilona Czamańska "for several recent centuries the investigation of the Vlachian ethnogenesis was so much dominated by political issues that any progress in this respect was incredibly difficult." Migration of the Vlachs may be the key for solving the problem of ethno genesis, but the problem is that many migrations were in multiple directions during the same time. These migrations were not just part of the Balkans and the Carpathians, they exist and in the Caucasus, the Adriatic islands and possibly over the entire region of the Mediterranean Sea. Because of this, our knowledge concerning primary migrations of the Vlachs and the ethnogenesis is more than modes.[75]