The Aoös' source is in Greece, specifically in the Pindus mountains in Epirus,[2][3] near the village of Vovousa. An artificial lake has been constructed at an altitude of 1350 meters,[4] and there is a hydroelectric dam in place since 1987. It flows through the Vikos–Aoös National Park, where it forms towering canyons and then flows through the town of Konitsa, where it is joined by the Voidomatis. It enters Albania near Çarshovë, where it is joined by the Sarantaporos. and then continues northwest through Përmet, Këlcyrë, Tepelenë (where it is joined by the Drino), Memaliaj, Selenicë and Novoselë. It then flows into the Adriatic Sea, northwest of Vlorë; mouth of the river is situated within the boundaries of the Vjosa-Narta Protected Landscape.

The river is known by a number of different names. In antiquity it was called Aoös (Ἄωος, Ἀῶος, Ἀῷος) in Greek, and Aous in Latin. In Albanian it is called Vjosë or Vjosa, while in Greece it is known by its ancient name (Αώος in modern orthography), as well as Vovousa (Βοβούσα) or Aias (Αίας, Αἴας).[5] In Aromanian it is Băiasa.

The old bridge of Konitsa over the Aoos river, just before the Vikos–Aoös National Park

In Greek mythology,[6] Aous is an epithet or name[7] of Adonis. Aous was also the name of the first king of Cyprus. A river and a mountain[8] in Cyprus were also named Aous.[6]

Hecataeus (550–476 BC) refers to the river as Aias (Greek: Αἴας), the name Anios (Greek: Ἄνιος) is used by Plutarch in Caesar,[9] while Polybius, Livy and Strabo use the term Aoös. The Thesprotian tribe of Parauaioi received their name from the river, as those living beside it. Pausanias writes of "sharks"[10] (Greek: θηρία) in the river, as it flows through Thesprotia. It is mentioned as Avos (Greek: Αύος) by Stephanus of Byzantium[11] in the 6th century AD.

In 274 BC Pyrrhus of Epirus defeated Antigonus II Gonatas near the river's banks. In 198 BC, Philip V of Macedon and the Roman Titus Quinctius Flamininus, clashed in the Battle of the Aous. In 170 BC[12] a plot to kidnap Aulus Hostilius Mancinus was foiled by Molossians by mistake. In antiquity the river passed more to the north[citation needed], towards where Fier nowadays lies. Owing to an earthquake[citation needed] in the 4th century, it changed to the present course. This earthquake and river change were the main reasons that led to the decline of the ancient Greek city of Apollonia.

The Vikos–Aoös National Park (Greek: Εθνικός Δρυμός Βίκου–Αώου Ethnikós Drymós Víkou–Aóou), founded in 1973 is a national park in the region of Epirus in northwestern Greece. The national park encompasses 126 square kilometres (31,135 acres) of mountainous terrain, with numerous rivers, lakes, caves, deep canyons and dense coniferous and deciduous forest. The core of the park (3400 hectares)[13] is the Vikos Gorge, carved by the Voidomatis river, while the Aoos gorge, mount Tymfi, with its highest peak Gamila 2,497 metres (8,192 ft) and a number of traditionally preserved settlements form the park's peripheral zone.

Since a decade or so, a 90 MW power plant at Kalivaç is under construction, but with no progress lately. The hydropower additional potential of the river is being studied by the Albanian Government. Seven additional hydroelectric power plants along the Albanian part of the river would have 400 MW total capacity (2,155 GWh/year). The feasibility of the project is being studied[14] but strongly denied by environmental groups like River Watch and EcoAlbania, which urge authorities to halt such plans and declare it a national park.[15] In February 2005 The Albanian Government approved a law, making the Vjose-Narte wetlands a protected area. This legislation followed Albania's ratification of the Kyoto Protocol in December 2004.[16] The river is known for its apport to the important irrigation canal Vjosë-Levan-Fier, a canal that was built in the 1950s for the irrigation of the Myzeqe low plains.[17] 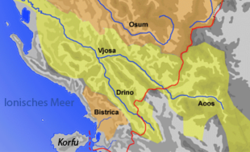 The area in yellow represents the drainage basin of Aoös (Vjosë) and its main affluent, Drino; the red line delineates the border between Albania and Greece.