Vincent Massey Secondary School, commonly known as Massey, is a public high school located in the South Windsor neighbourhood of Windsor, Ontario, Canada. The school is under the jurisdiction of the Greater Essex County District School Board, one of the four school boards in Windsor–Essex. The school was named after Vincent Massey, the first Canadian-born Governor General of Canada. Currently, the school has a population of over 2000 students.

The school offers both semestered and non-semestered courses. It is notable within Windsor for offering the enriched program.

During the late 1960s and the early 1970s, Morris the Mustang, the school's mascot,[1] would be paraded around South Windsor's Norfolk Street to celebrate the commencement of the football season.

In the fall of 1966, a swimming pool, a second gym, a cafeteria, technical and business areas, the library and labs were opened to accommodate an increasing student population. Tennis courts were planned on the parcel of land that sits along Rankin Avenue, but neighbours complained about the project during the 1960s and the land is now used as a bus stop. During this time, the name "Collegiate Institute" was replaced by "Secondary School" to reflect the fact that Vincent Massey had become a fully composite school.

Enrollment was so high at the school during the early 1960s – peaking at over 2,200 students – that a second high school was constructed in South Windsor. Opened in 1970, Centennial Secondary School created a new learning institution and lowered the enrollment numbers.

In 1984, Vincent Massey became a magnet school for its enrichment programs in Mathematics, Science, English and French.

By the 1980s, the demographics of South Windsor changed greatly and the baby boom population had moved on, leaving Massey with approximately 800 students. In September 1986, most students from Centennial Secondary School relocated to Vincent Massey after Centennial was chosen to be closed due to dwindling enrollment in both schools. Vincent Massey added Orange to its school colours in honour of Centennial, whose school colours were Black and Orange. Their sports teams were also known as the Mustangs.

In 2000, Vincent Massey welcomed students from W. D. Lowe High School after it closed down in June of that year. From 2001 to 2006, Vincent Massey also admitted Grade 7 and 8 students within their own area of the school named Massey Elementary.

Located in the heart of the South Windsor neighbourhood, the campus sits on approximately five acres of land. The school's front doors are located along Liberty Street, while its rear is located near Norfolk Street. The rear of the campus features an athletic field and an oval track. The building itself has two gyms, a weight room, a new workout room, a library housed in a circular building, a moderately sized cafeteria, a wood shop, a metal shop, as well as several classrooms and offices for students and staff. In the spring and summer months of 2017, the cafeteria and the closed swimming pool were renovated into 6 new classrooms and a larger cafeteria to make room for the growing number of students.

In the Fraser Institute's 2014 Report Card on Ontario's Secondary Schools, Vincent Massey was ranked at 48 out 740 secondary schools in Ontario in terms of academic performance.[2] In the same report card, Vincent Massey was the first place out of all secondary schools in Windsor and first in the Great-Essex County. Over the last five years, Massey had been ranked on average at 91 out of 691 in the Fraser Institute's report cards.[2]

Vincent Massey is one of the three schools within Windsor that offers the Advanced Placement program, commonly referred to as the Enriched program.[3]

Massey has been known for its very strong mathematics program and its excellent performance on University of Waterloo's CEMC-administered Pascal (9th Grade), Cayley (10th Grade), Fermat (11th grade) and Euclid (12th grade) mathematics contests, winning the team Champion for Euclid.[4][5][6] It also competes in other Canadian and American mathematics competitions, such as the American Mathematics Competitions and the American Invitational Mathematics Examination (AIME).

Mathematics teacher Bruce White was one of the recipients of the 1993 Prime Minister's Awards for Teaching Excellence.[7] The award, awarded by former Prime Minister Jean Chrétien, was presented to White by former Member of Parliament Herb Gray. White was also a recipient of the Edyth May Sliffe Award in 1993, 1999 and 2003.[8]

Mathematics teacher Christopher Ing, who is a former Massey student as well as former pupil of Bruce White, was one of the recipients of the High School Sliffe Award in 2008. A computer science teacher, Ronald McKenzie, also received this award in 2009.[9]

Business teacher Ross Ferrara won an award of merit from the Ontario Business Educators' Association in 2010 for promoting and increasing awareness of business studies.[10] Ferrara was also selected by the Ontario Ministry of Education, as the high school teachers representative, to the Financial Literacy Working Group.[11] 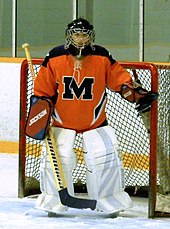 Vincent Massey has always had a very strong athletics program. All of Massey's teams are proud owners of many WECESSA, SWOSSA and OFSAA titles.

In the 1987–88 season, the Senior Boys Basketball Team went undefeated during the regular season, only to lose a playoff game later.

The school has been doing extremely well with the Senior Boys Team winning the OFSAA championship from 2007 to 2009. Also in 2010 both the senior boys and senior girls teams won OFSAA which no other school has ever done before. As of the 2015–16 season Massey has won a total of 11 consecutive WECSSAA Cross Country Championship titles.[13]

In both the 1986–87 and the 1987–88 seasons, the Senior Boys Football Team won back to back city championship in the Newman conference (the Wilson Conference was for schools of smaller enrollment). In the 1988–89 season, the Senior Boys Football Team nearly got a "three-peat" but lost the city championship in an infamous triple over-time game when they missed a last minute field goal attempt. These teams were "co-coached" by both Brian Tayles (former head coach for the Centennial Cougars) and Godfrey Janisse (long time Massey Mustang head coach) with Tayles running the Offense and Janisse running defense and special teams. Incidentally, Janisse had previously coached Tayles when Tayles was in High School.

In 1992, the Senior Boys Football team defeated the Brennan Cardinals to capture the city championship. The team was led by Windsor Hall of Fame coach Godfrey Janisse.

In the 1987–88 season, the Senior Girls Soccer Team won the city championship.

In 2009, the Massey Swim Team ranked 3rd in the province in men's events, and came 8th overall during the provincial championships.[15] During the OFSAA championships, Massey grabbed Gold in men's 200 Medley Relay two years in a row, and Silver in the 200 Free Relay.[15] Massey also captured two bronze medals in 50 Freestyle and 100 backstroke.

In the late 1980s, the Senior Girls Volleyball Teams were very strong. In the 2010 fall–winter season, both Massey junior and senior girls volleyball teams were SWOSSAA champions. The senior girls team then competed in Toronto for OFSSAA.