1969 map of the Demilitarized Zone 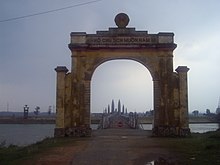 Photo taken from the north side of the DMZ at the Route 1 crossing. The guard tower on the left is a re-creation and spires seen in the distance through the arch are a new monument.

The Vietnamese Demilitarized Zone was a demilitarized zone established as a dividing line between North and South Vietnam from July 1954 to 1976 as a result of the First Indochina War to prevent the reunification of Vietnam.

During the Vietnam War (1955-1975), it became important as the battleground demarcation separating North from South Vietnamese territories.

The zone ceased to exist with the reunification of Vietnam on 2 July 1976, though the area remains dangerous due to the numerous undetonated explosives it contains.

The Vietnamese Demilitarized Zone ran from east to west near the center of present-day Vietnam (spanning more than a hundred kilometers, 60 miles) and was a couple of kilometers (a mile) wide, about a hundred kilometers (60 miles) north of the city of Huế. It ran along the Ben Hai River for much of its length, and an island nearby was controlled by North Vietnamese forces during the Vietnam War. Although it was nominally described as being at "the 17th parallel," almost all of the zone lies to the south of the parallel, with only a small portion of the zone near the eastern end actually including the parallel.

The First Indochina War (also called the French Indochina War) was fought in French Indochina from 1946 to 1954 between France and the French-controlled State of Vietnam on the one side, and the Communist-dominated independence movement, the Viet Minh with the help of China and Russia on the other. The Viet Minh won the war, gaining effective control of all northern Vietnam except an enclave around Hanoi .

The post-colonial conditions of Vietnam were set at the Geneva Conference of 1954; the agreement was finalized on July 21, 1954. 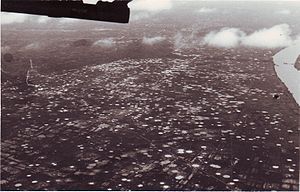 The Demilitarized Zone between North and South Vietnam, March 1968, looking west toward Laos.

The boundary between these two zones was established at the Ben Hai River, which enters the South China Sea at 17 degrees 0 minutes 54 seconds N latitude. The boundary followed the Ben Hai to its headwaters, about 55 km (35 miles) WSW, and thence to the Laotian border.

The area within 5 km (3 miles) on either side of the border was declared to be a demilitarized zone. Troops of both governments were barred from this area. 3rd Marine Division intelligence estimated the combat strength of NVA and VC forces in the DMZ area in January 1968 was 40,943 troops[1]. This DMZ was ended by the reunified Vietnam on 2 July 1976.

Exploring the Demilitarized Zone can today be comfortably achieved by joining one of various organised tours starting daily from Hué. Together with a local guide the most famous war settings, such as Khe Sanh Combat Base, The Rockpile, Ho Chi Minh Trail, Doc-Mieu-Station or the Vinh Moc tunnels, are visited on a full-day trip.

Although the Vietnam War ended decades ago, walking outside marked tracks can still be dangerous because of numerous unexploded ordnance devices.[2]