The Vienna Secession (German: Wiener Secession; also known as the Union of Austrian Artists, or Vereinigung Bildender Künstler Österreichs) is an art movement, closely related to Art Nouveau, that was formed in 1897 by a group of Austrian painters, graphic artists, sculptors and architects, including Josef Hoffman, Koloman Moser, Otto Wagner, and Gustav Klimt. They resigned from the Association of Austrian Artists in protest against its support for more traditional artistic styles. Their most influential architectural work was the Secession Building designed by Joseph Maria Olbrich as a venue for expositions of the group. Their official magazine was called Ver Sacrum which published highly stylised and influential works of graphic art. In 1905 the group itself split, when some of the most prominent members, including Klimt, Wagner and Hoffmann, resigned in a dispute over priorities, but it continued to function, and still functions today, from its headquarters in the Secession Building.

The Vienna Secession was founded on 3 April 1897 by artist Gustav Klimt, designer Koloman Moser, architects Josef Hoffmann and Joseph Maria Olbrich, Max Kurzweil, Wilhelm Bernatzik and others. The architect Otto Wagner joined the group shortly after it was founded. The goals stated at the founding included establishing contact and an exchange of ideas with artists outside Austria, disputing artistic nationalism, renewing the decorative arts; creating a "total art", that unified painting, architecture, and the decorative arts; and, in particular, opposing the domination of the official Vienna Academy of the Arts, the Vienna Künstlerhaus, and official art salons, with its traditional orientation toward Historicism.

The movement took its name from Munich Secession movement that was founded in 1892. The goals of the new movement in Vienna were expressed by the literary critic Hermann Bahr in the first issue of the new journal begun by the group, called Ver Sacrum ("Sacred Spring"). Bahr wrote, "Our art is not a combat of modern artists against those of the past, but the promotion of the arts against the peddlers who pose as artists and who have a commercial interest in not letting art bloom. The choice between commerce and art is the issue at stake in our Secession. It is not a debate over aesthetics, but a confrontation between two different spiritual states." [1]

At the beginning, the Secession had fifty members, and at its first elected the painter Gustav Klimt as its president. Other founding or early members included the architect Josef Hoffmann, the designer Koloman Moser, the designer and architect Joseph Maria Olbrich, and the painters Max Kurzweil, and Czech Alphonse Mucha[2], who resided in Paris and was already famous for his Art Nouveau posters. [1] The established painter Rudolf von Alt, eighty-five years old, was chosen as the Honorary President of the group, and he led a delegation which an invitation to the Emperor Franz-Joseph to attend the first Exposition. [1]

The first architectural project of the Secession was the creation of an exhibit space which would introduce international artists and art movements to Vienna. The architect was Joseph Maria Olbrich, a student of Otto Wagner; and his domed gallery building, with a sculptural frieze over the entrance, in the center of Vienna, became the symbol of the movement. It was the first dedicated gallery of contemporary art in the city.[3] This helped make the French Impressionists and others familiar to the Viennese public.

The 14th Secession exhibition in 1902, designed by Josef Hoffmann and dedicated to Ludwig van Beethoven, was especially famous. A statue of Beethoven by Max Klinger stood at the center, with Klimt's Beethoven frieze mounted around it. The Klimt frieze has been restored and can be seen in the gallery today.

Split within the Secession

In 1899, Olbrich left Vienna to join the Darmstadt Artists’ Colony. In 1900, he obtained Hessian citizenship and did not work in Austria again.

An important division soon emerged inside the Secession between those who wished to give precedence to the painters and the traditional fine arts, and others, including Klimt, Hoffmann, Wagner, Moser and others who favored equal treatment for the decorative arts. This dispute came to a head in 1905 when a prominent painter in the group, Carl Moll, proposed that the Secession purchase the Gallery Miethke, as an outlet for its work. This was supported by Klimt, Wagner, Hoffmann, Moser, and others. The issue was put to a vote by the members, and Klimt and his supporters lost by a single vote. On June 14, 1905, Klimt, Hoffmann, Moser and a group of other artists resigned from the Secession.[3]

The Secession continued to function after the departure of Klimt, Hoffmann, Wagner and their supporters, giving regular exhibitions in the Secession building, but they lacked the originality and excitement of the earlier period. The designer Peter Behrens became a member of the Secession in 1938. During the regime of the Hitler and the Nazis the Secession building was destroyed as a symbol of decadent art, but was faithfully reconstructed following the War.

In 1945, following the War, Hoffmann rejoined the Vienna Secession, the artistic movement from which he, Klimt and Wagner had dramatically quit in 1905. He was elected President of the Secession from 1948 to 1950.[4] The Secession continues to function today, holding regular exhibitions in the Secession Hall.

Along with painters and sculptors, several prominent architects were associated the Vienna Secession, most notably Joseph Maria Olbrich, Otto Wagner and Josef Hoffmann. In 1897-98 Olbrich designed the Secession Building to display the art of Klimt and the members of the group, and also by foreign artists, including Max Klinger, Eugène Grasset, Charles Rennie Mackintosh, and Arnold Bocklin. Josef Hoffmann became the principal designer of exhibitions at the Secession House. The dome and stylized facade became a symbol of the movement.

A group of artists including Koloman Moser, Othmar Schimkowitz, Jože Plečnik, and others, under the direction of architect Otto Wagner, decorated two apartment buildings Wagner designed; the Linke Wienzeile Buildings in 1898–1899. The building at Linke Wienzeile 40 is known as Majolikahaus or Majolica House. Its facade is entirely covered with majolica, or colorful fired clay tiles in floral designs. [5] The Art Nouveau ornaments of its facade was done by his student Alois Ludwig [de].[6] The other building, Linke Wienzeile 38, is known as House with medallions because of its decor of gilded stucco medallions by Wagner's student and frequent collaborator, Koloman Moser. The most ornate earlier decoration was removed but later restored.

During this period, Otto Wagner also built extraordinarily stylized stations for the new Vienna urban transport system, the Stadtbahn, which also became the symbols of the Secession style. The most famous of these is the Karlsplatz Stadtbahn Station in the center of Vienna, [7] Joseph Maria Olbrich was his collaborator for this project. The style of these buildings marked a transition toward more geometric forms, and the beginnings of modernism.[8]

Wagner's later buildings built after 1899, including the Church of St. Leopold (1902–1907) and especially the Austrian Postal Savings Bank (1903–1906, extended at 1910–12), had straight lines and geometric forms, a striking use of new materials, such reinforced concrete and aluminum, and a minimum of decoration on the facade or inside.[9]

The work of Josef Hoffmann also showed a gradual transition away from floral designs and curving lines. His best-known building, the Palais Stoclet in Brussels, had a tower of stacked cubic forms, minimum ornament on the facade, and an interior of right angles and geometric designs. The only Art Nouveau elements were the murals by Gustav Klimt. The Palais Stoclet best illustrated Hoffmann's transition from Art Nouveau toward modernism. [10]

Secession architects often designed furniture to accompany their architectural projects, along with carpets, lamps, wallpaper, and even bathroom fixtures and even towels. The furniture presented by the Secession at the 1900 Paris Universal Exposition was particularly praised, and won international attention for its creators, including Else Unger and Emilio Zago.[11]

Later in the movement, in 1902, the architect Otto Wagner designed chairs using modern materials, including aluminum, combined with wood, to match the architecture of his Austrian Postal Savings Bank building. In 1905 Josef Hoffmann produced an adjustable-backed chair which reflected the more geometric forms of the late Secession.

Glass, particularly stained glass windows, played a significant part in the Vienna Secession. Leopold Forstner was in important artist in this domain, working closely with Otto Wagner and other architects. He designed the windows for the Austrian Postal Savings Bank, one of the landmarks of the Vienna Secession style, and also for the St. Charles Borromeo Cemetery Church, the most notable of Vienna Secession churches.

Another notable figure in Secession glass art was Johann Loetz Witwe, who made a striking series of iridescent vases which won a gold medal at the 1900 Paris Exposition.

Mosaics of ceramic tiles were another important element of the Vienna Secession style. They were used to decorate both building facades and interiors. Otto Wagner used them to decorate the Majolika House, where they served both as decoration and for a practical purpose; the facade could be efficiently cleaned with the use of fire hoses. 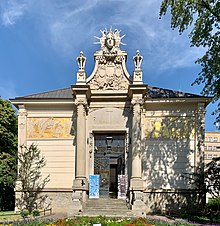 Palace of Art, also known as "Secession", of the Kraków Society of Friends of Fine Arts, in Krakow Old Town 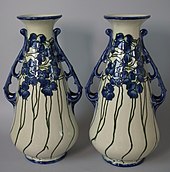 Vienna Secession influenced not only movements but also particular architects, e.g. Russian Illarion Ivanov-Schitz who created his own unique style on its base.

From the mid-1890s onwards, Mintons in England made major contributions to Art Nouveau ceramics, many designed by Marc-Louis Solon's son Leon Solon and his colleague John Wadsworth. Leon Solon was hired by Mintons after his work was published in the hugely influential design magazine The Studio and he worked for the company from 1895–1905, including a brief stint as Art Director. Solon introduced designs influenced by the Vienna Secession, and a range in earthenware made from about 1901 to 1916 was branded as "Secessionist Ware". It was made mostly using industrial techniques that kept it relatively cheap, and was aimed at a broad market. The range concentrated on items bought singly or in pairs, such as jugs or vases, rather than full table services.[13]

On the obverse side there is a view of the Secession exhibition hall in Vienna. The reverse side features a small portion of the Beethoven Frieze by Gustav Klimt. The extract from the painting features three figures: a knight in armor representing Armed Strength, one woman in the background symbolizing Ambition and holding up a wreath of victory, and a second woman representing Sympathy with lowered head and clasped hands.

On the obverse side of the Austrian € 0,50 or 50 euro-cent coin, the Vienna Secession Building figures within a circle, symbolising the birth of the movement and a new age in the country.

Artists of Vienna Secession not mentioned above are:

Some artists from other cities and countries, like Max Liebermann from Berlin or Auguste Rodin and Eugène Grasset from Paris were made corresponding members.[2]