The Vienna Convention on Consular Relations is an international treaty that defines a framework for consular relations between sovereign states. It codifies many consular practices that originated from state custom and various bilateral agreements between states.[3]

Consuls have traditionally been employed to represent the interests of state's or their nationals at an embassy or consulate in another country. The Convention defines and articulates the functions, rights, and immunities accorded to consular officers and their offices, as well as the rights and duties of "receiving States" (where the consul is based) and "sending States" (the state the consul represents).

The Convention was adopted on April 24, 1963 following the United Nations Conference on Consular Relations in Vienna, Austria from 4 March to 22 April 1963. Its official texts are in the English, French, Chinese, Russian and Spanish languages, which the Convention provides are equally authentic.[2]

The treaty contains 79 articles.[2] The preamble to the Convention states that customary international law continues to apply to matters not addressed in the Convention.[2][4] Some significant provisions include.[2]

The Convention (Article 43)[2] provides for consular immunity. Some but not all provisions in the Convention regarding this immunity reflect customary international law.[4] Consular immunity is a lesser form of diplomatic immunity. Consular officers and consular employees have "functional immunity" (i.e., immunity from the jurisdiction of the receiving state "in respect of acts performed in exercise of consular function"), but do not enjoy the broader "personal immunity" accorded to diplomats.[4]

State parties to the convention 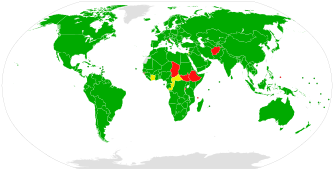 Application of the treaty by the United States

In March 2005, following the decisions of the International Court of Justice in the LaGrand case (2001) and Avena case (2004), the United States withdrew from the Optional Protocol to the Convention concerning the Compulsory Settlement of Disputes, which confers the ICJ with compulsory jurisdiction over disputes arising under the Convention.[5][6]

In 2006, the United States Supreme Court ruled that foreign nationals who were not notified of their right to consular notification and access after an arrest may not use the treaty violation to suppress evidence obtained in police interrogation or belatedly raise legal challenges after trial (Sanchez-Llamas v. Oregon).[7] In 2008, the U.S. Supreme Court further ruled that the decision of the ICJ directing the United States to give "review and reconsideration" to the cases of 51 Mexican convicts on death row was not a binding domestic law and therefore could not be used to overcome state procedural default rules that barred further post-conviction challenges (Medellín v. Texas).[8]

In 1980, prior to its withdrawal from the Optional Protocol, the U.S. brought a case to the ICJ against Iran—United States Diplomatic and Consular Staff in Tehran (United States v Iran)—in response to the seizure of United States diplomatic offices and personnel by militant revolutionaries.[9]