Victory in Europe Day is the day celebrating the formal acceptance by the Allies of World War II of Germany’s unconditional surrender of its armed forces on Tuesday, 8 May 1945, marking the end of World War II in Europe. Several countries observe public holidays on the day each year, also called Victory Over Fascism Day, Liberation Day or Victory Day. In the UK it is often abbreviated to VE Day, or V-E Day in the US, a term which existed as early as September 1944,[1] in anticipation of victory.

Several former Soviet bloc countries like Russia, Belarus, and Serbia celebrate on 9 May as the end of all combat actions was specified at 23:01 Central European Time, which was already 9 May in the Soviet Union. Israel also marks VE Day on 9 May, as a result of the large number of immigrants from the former Soviet bloc, but it is not a public holiday. 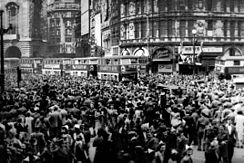 Crowds gathering in celebration at Piccadilly Circus, London during VE Day on 8 May 1945 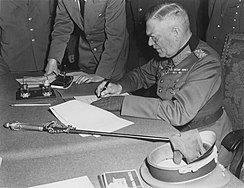 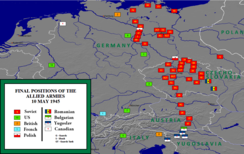 Final positions of the Allied armies, May 1945. 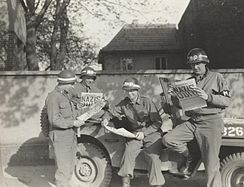 Adolf Hitler, the Nazi leader, had committed suicide on 30 April during the Battle of Berlin and Germany's surrender was authorised by his successor, Reichspräsident Karl Dönitz. The administration headed by Dönitz was known as the Flensburg Government. The act of military surrender was first signed at 02:41 on 7 May in SHAEF HQ at Reims,[2] and a slightly modified document, considered the definitive German Instrument of Surrender, was signed on 8 May 1945 in Karlshorst, Berlin at 21:20 local time.

The German High Command will at once issue orders to all German military, naval and air authorities and to all forces under German control to cease active operations at 23.01 hours Central European time on 8 May 1945...

Upon the defeat of Germany, celebrations erupted throughout the western world, especially in the UK and North America. More than one million people celebrated in the streets throughout the UK to mark the end of the European part of the war. In London, crowds massed in Trafalgar Square and up the Mall to Buckingham Palace, where King George VI and Queen Elizabeth, accompanied by their daughters and Prime Minister Winston Churchill, appeared on the balcony of the palace before the cheering crowds. Churchill went from the palace to Whitehall where he addressed another large crowd:[3]

God bless you all. This is your victory. In our long history, we have never seen a greater day than this. Everyone, man or woman, has done their best.

At this point he asked Ernest Bevin to come forward and share the applause. Bevin said: "No, Winston, this is your day", and proceeded to conduct the people in the singing of For He's a Jolly Good Fellow.[3] Later, Princess Elizabeth (the future Queen Elizabeth II) and her sister Princess Margaret were allowed to wander incognito among the crowds and take part in the celebrations.[4]

In the United States, the event coincided with President Harry Truman's 61st birthday.[5] He dedicated the victory to the memory of his predecessor, Franklin D. Roosevelt, who had died of a cerebral hemorrhage less than a month earlier, on 12 April.[6] Flags remained at half-staff for the remainder of the 30-day mourning period.[7][8] Truman said of dedicating the victory to Roosevelt's memory and keeping the flags at half-staff that his only wish was "that Franklin D. Roosevelt had lived to witness this day".[6] Later that day, Truman said that the victory made it his most enjoyable birthday.[5] Great celebrations took place in many American cities, especially in New York's Times Square.[9]

Tempering the jubilation somewhat, both Churchill and Truman pointed out that the war against Japan had not yet been won. In his radio broadcast at 15:00 on 8 May, Churchill told the British people that: "We may allow ourselves a brief period of rejoicing (as Japan) remains unsubdued".[10][11] In America, Truman broadcast at 09:00 and said it was "a victory only half won".[12]

VE Day is celebrated across European nations as public holidays and national observances.

On the eve of the diamond jubilee in 2020, Russian President Vladimir Putin, at the request of Chancellor Sebastian Kurz, gave a live address broadcast Austrian TV channel ORF.[13] The Festival of Joy is an Austrian event held in honor of VE Day. The Mauthausen Committee Austria (MKÖ) has organised the Festival of Joy since 2013, in cooperation with the Austrian Government and the City of Vienna. The festival is held annually on Heldenplatz.[14]

France celebrates VE Day on 8 May, being a national and public holiday. Orléans simultaneously celebrates both VE Day and the anniversary of the Siege of Orléans being lifted by French forces led by Joan of Arc during the Hundred Years War on this date.[citation needed]

Events in Berlin occur on 8 May to commemorate those who fought against Nazism in the German Resistance and lost their lives in World War II. In 2020, a regional holiday in Berlin occurred on 8 May to mark the 75th anniversary of surrender.[15] East Germany celebrated 8 May as its Tag der Befreiung (Day of Liberation), first celebrated under Walter Ulbricht's government in 1950 and repeated annually until the fall of communism.[16] Between 1975 and 1990, it was Tag des Sieges (Victory Day).[citation needed]

8 May is known in Poland as "Narodowy Dzień Zwycięstwa" (National Victory Day). Poland officially recognised 9 May from 1945 until 2014, and on 24 April 2015, Poland officially recognised National Victory Day.[17] On 8 May 1945, a meeting of the Council of Ministers was held, debating whether to establish the holiday on 8 May (proposed by Marshal Michał Rola-Żymierski) or 10 May (proposed by the government)[18]. Finally, in Poland, the National Day of Victory and Freedom was established by a decree of 9 May. From 1946-1989, it was celebrated with Russian traditions being a socialist state at the time. The main celebrations were carried out at Plac Zwycięstwa or Plac Defilad in Warsaw (most notably in 1985). After 1990, no official ceremonies were organized, however many cities and military units together with local governments organized their own festivities. The Russian minority in Poland continues to celebrate 9 May traditions to this date. At the end of March 2015, due to the upcoming 70th anniversary of the end of World War II in Europe, the President of the Institute of National Remembrance Łukasz Kamiński sent a letter to the Speaker of the Sejm requesting the change from 9 May to 8 May.[19] On 24 April, the Sejm adopted the Act on National Victory Day celebrated on May 8, at the same time abolishing the National Day of Victory and Freedom celebrated on May 9.[20]

The United Kingdom celebrates Victory in Europe Day on 8 May as a national commemorative holiday. VE Day is not an annual public holiday because of the proximity of the May Day bank holiday on the first Monday in May. In 1995 and 2020 the bank holiday was moved from the preceding Monday to 8 May to commemorate the 50th and 75th anniversaries of VE Day, respectively.[21][22]

The instrument of surrender signed 7 May 1945 stipulated that all hostilities must cease at 23:01 (CET), 8 May 1945. Since that point in time would be on 9 May in local time in the USSR, most Soviet states including Russia celebrated Victory Day on 9 May.[56][57]