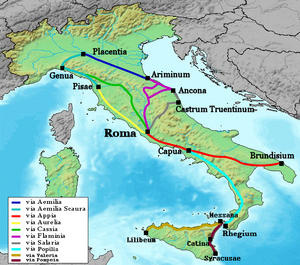 Route of Via Salaria (in gray).

The Via Salaria was an ancient Roman road in Italy.

It eventually ran from Rome (from Porta Salaria of the Aurelian Walls) to Castrum Truentinum (Porto d'Ascoli) on the Adriatic coast, a distance of 242 km. The road also passed through Reate (Rieti) and Asculum (Ascoli Piceno). The Via Salaria owes its name to the Latin word for "salt", since it was the route by which the Sabines living nearer the Tyrrhenian sea came to fetch salt from the marshes at the mouth of the Tiber, the Campus Salinarum[1], while those nearer the Adriatic Sea used it to fetch it from production sites there.[2] It was one of many ancient salt roads in Europe, and some historians[who?] consider the Salaria and the trade in salt to have been the origin of the settlement of Rome. Some remains still exist of the mountain sections of the road.

Strada statale 4 Via Salaria (SS4) is the modern state highway that maintains the old road's name and runs on the same path from Rome to the Adriatic sea.

Remains of the Roman bridge over Velino river in Rieti