Vermont Route 243 (VT 243) is a 1.181-mile-long (1.901 km) state highway located within the village of North Troy in Orleans County, Vermont, United States. The route runs from the Canada–United States border at Potton, where the road continues into Quebec, past the North Troy–Highwater Border Crossing as Route 243, to VT 105 in the village center. 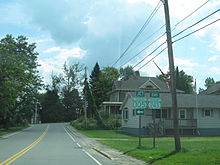 VT 243 begins at an intersection with VT 105 (Highland Avenue / North Pleasant Street) in the village of North Troy. A northern continuation of Highland Avenue, VT 243 runs northeast along Elm Street along the western end of North Troy as a main residential street. The route curved northeast a little further after Main Street, the route runs along Elm for another block, reaching Railroad Street. At Railroad Street, VT 243 turns west and parallels the eponymous railway, crossing nearby Dominion Avenue, which dead-ends short of the Canada–United States border. The route bends northwest after Dominion, passing between the railroad and some homes in North Troy. VT 243 soon crosses through dense woods outside of downtown North Troy, reaching the North Troy–Highwater Border Crossing United States Customs station. After the station, whose headquarters are on the southbound side of the highway, VT 243 crosses the Quebec provincial line, becoming Route 243 (Route de Mansonville) on the opposite side.[2]

The entire route is in North Troy, Orleans County. [1]