Verdun (/vərˈdʌn/; French: [vɛʁdœ̃]) is a borough (arrondissement) of the city of Montreal, Quebec, situated along the St. Lawrence River. It consists of the former city of Verdun, which was merged with the city of Montreal on January 1, 2002. The settlement of Verdun was founded in 1671, making it one of Canada's oldest cities. In 1956, Nuns' Island (île des Sœurs) was amalgamated with Verdun, which is on the Island of Montreal.

The borough of Verdun is located in the southeastern part of the Island of Montreal and also includes Nuns' Island (Île des Sœurs). The part on the Island of Montreal is bounded to the southwest by LaSalle, to the northwest by the borough of Le Sud-Ouest (Ville-Émard and Côte-Saint-Paul) and the Canal de l'Aqueduc, to the northeast by the Pointe-Saint-Charles (Le Sud-Ouest) and the Décarie Autoroute (Aut. 15), and to the southeast by the St. Lawrence River.

Verdun proper and Nuns' Island are joined by the Pont de l'Île-des-Sœurs on Aut. 15, part of the Champlain Bridge complex that crosses Nuns' Island and links it to Brossard on the south shore of the St. Lawrence.

Archaeological traces in and around the Maison Nivard de Saint-Dizier in western Verdun demonstrate the presence of Aboriginal people in Verdun as early as 4,000 years ago.[7]

Verdun had its origins in as an area known as Côte des Argoulets at the foot of the Lachine Rapids. It was initially a militarized area (argoulets meaning "sharpshooters"), with concessions given to militiamen who agreed to guard the area against an Iroquois assault on the colony of Ville-Marie. In 1671, the Sulpician Order, lords of the Island of Montreal since 1663, granted the area (now the western part of Verdun) as a fief to Major Zacharie Dupuis, chief of the Montreal militia. He is believed to have named the area after his natal village of Saverdun in southwestern France. Côte des Argoulets was renamed Côte de Verdun shortly afterward.

Following the Great Peace of Montreal in 1701 between the French and the Iroquois, which reduced the military threat to settlers in the southwest of the island, farmers settled the area along Lower Lachine Road, now boulevard LaSalle. Around 1800, Chemin de la Rivière-Saint-Pierre (now rue de l'Église) was opened.[9] The Canal de l'Aqueduc, now Verdun's northwestern boundary, was dug in 1854 to furnish Montreal with drinking water from the St. Lawrence.[10]

In 1874, a group of local land-owners met in a farmhouse called Le Pavillon, located at the corner of Lower Lachine Road and Chemin de la Rivière-Saint-Pierre, and decided to found the village of Rivière-Saint-Pierre. Chartered by the government of Quebec, it became the municipality of Verdun the following year. Settlement had been hampered due to frequent flooding, but a dyke was built starting in 1896; its completion resulted in a population boom. The dyke itself became host to Verdun's popular Boardwalk, before land reclamation in the 70s led to the expansion of the waterfront park along the whole length of Verdun's riverbank.

In 1881, the Montreal Hospital for the Insane was founded as a Protestant counterpart to the Catholic Hôpital Saint-Jean-de-Dieu (now Hôpital Louis-H.-Lafontaine) east of the city. It would be built on two farms, purchased in 1887 and 1907, in the western end of Verdun. Affiliated with McGill University in 1946, it was renamed the Douglas Hospital in 1965.[10] Today, not only is it one of Verdun's largest public institutions, but its campus is one of the borough's most important greenspaces.

Verdun became a town in 1907 and a city in 1912. Between 1911 and 1924 the population tripled and urbanization expanded rapidly "westward" (according to "Montreal directions" - actually due southward), and the farms were divided for residential use. The Moffat area west of rue Desmarchais was built in with "plexes"—the typical Montreal layered apartment—between 1920 and 1930,[11] and the Crawford Park area in the far west of the town was built starting in 1945, in a more suburban style unlike the orthogonal grid used in the rest of Verdun.[8] The Verdun Natatorium was built in 1930, the Verdun Hospital in 1932, and the Verdun Auditorium in 1938.

The city was chiefly (59% in 1931) English-speaking. According to historian Serge Durflinger, Verdun residents made a massive contribution to the Canadian war efforts in World War I and World War II, due to the many British immigrants living there who enthusiastically joined the Canadian armed forces.[12]

The municipality of Île-Saint-Paul, occupying what was by then universally known as Nuns' Island or Île des Sœurs, was annexed to Verdun in 1956. Then a chiefly agricultural area, it was rapidly urbanized following the opening of the Champlain Bridge in 1962, with development including contributions by the famous Modernist architect Ludwig Mies van der Rohe.[13] Rapid development would continue to the present day, with the erosion of the sensitive natural woodland of the Domaine Saint-Pierre becoming an increasingly pressing concern. 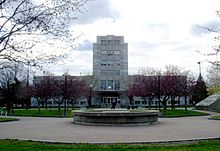 Back in Verdun proper, in the post-war period, the area around the church, along rue Wellington and rue de l'Église, became the nucleus of commercial development. A new city hall was built on Rue de Verdun in 1958.[14] The Green Line of the Montreal Metro was extended into Verdun in 1978, its construction delayed due to a collapse in rue Wellington during the construction of De L'Église station.[15] Besides De l'Église in downtown Verdun and Verdun station in front of the town hall, LaSalle station was built in vacant land in a former industrial area in the east of the borough, left vacant by the demolition of the vast British Munitions Supply Co. facilities; the Metro station would become the heart of a new residential area called La Poudrière after the munitions factories.[16]

However, improved access to downtown Montreal meant a decline in local commerce. A program of subsidies and revitalization starting in the 1990s reinvigorated the rue Wellington commercial corridor.[9]

Verdun was a partially dry community, with taverns, night clubs and cabarets banned since 1965, and alcohol sales restricted to restaurants with liquor licences, grocery stores and the SAQ.[17] In December 2010, the borough announced that it was planning to allow some microbreweries or performance spaces to sell alcohol.[18]

In 2002, the Montreal municipal mergers saw the city of Verdun become a borough of Montreal. The majority of Verduners chose not to hold a demerger referendum in 2004-2006.

A typical side street in Verdun. 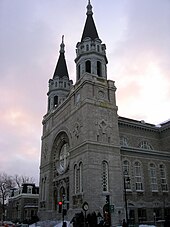 Notre-Dame-des-Sept-Douleurs church, at the centre of downtown Verdun

In the early part of the 20th century, Verdun had a majority English-speaking population and until 1954 — when the 80,000 residents made Verdun the third largest city in Quebec— the anglophone and francophone populations were roughly equal.[21] It is now about two-thirds French-speaking. 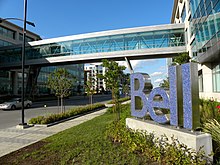 The head office of Bell Canada is located on the northern tip of Nuns' Island.

Bell Canada is now headquartered in Verdun, on a campus on the northern tip of Nuns' Island.[22]

Verdun is served by Quebec Autoroutes 15 and 20, which skirt the northern and eastern edges of its mainland portion and merge with Autoroute 10 on Nuns' Island. The island is connected to the Island of Montreal and the South Shore via the Champlain Bridge.

The borough is contemplating the possibility of building a service bridge between the Island of Montreal and Nuns' Island. The bridge would connect Boul. Marguerite-Bourgeoys on Nuns' Island with Rue Galt in mainland Verdun. It would be accessible only to city services, public transit, cyclists, and pedestrians.[23]

The borough is served by the Green Line of the Montreal Metro: Verdun, De l'Église, and LaSalle stations, along with Jolicoeur station immediately across the aqueduct in Ville-Émard. All of these stations have been in service since 1978. Other than the metro, there is also the bus. The following bus routes pass through Verdun: 12 Ile Des Soeurs, 21 Place Du Commerce (runs AM rush only),37 Jolicoeur, 58 Wellington, 61 Wellington, 71 Du Centre, 107 Verdun and 108 Bannantyne.

Significant medical facilities in the borough include the Douglas Hospital, a McGill University research hospital in mental health, and Verdun General Hospital. The Douglas grounds were the original playing fields for the Montreal Ultimate Association.

Recreational facilities include the Verdun Auditorium, a hockey arena and concert hall, the home of the now defunct Junior de Montréal team. On November 2, 1993, rock band Nirvana played a concert at the auditorium on their final North American tour.

Expansive parks (L'Honorable-George-O'Reilly, Mgr-J-A-Richard, and Arthur-Therrien) with bike paths line the banks of the St. Lawrence River, making Verdun one of the few parts of the Island of Montreal to open onto the whole length of its waterfront, a legacy of the flooding that once impeded settlement. The waterfront also features the Verdun Natatorium, public-access docks and a marina, an open-air dancing shell, a lawn bowling green, and football, baseball, and soccer fields. In 2019, a public beach was opened behind the Auditorium.[24]

Cycling is also available along the Canal de l'Aqueduc on the opposite edge of the borough; on rue de Verdun; and around and through Nuns' Island, including the cycle-accessible Champlain Bridge ice structure connecting to Île Notre-Dame and the south shore.

Another of the borough's major green spaces, the Domaine Saint-Paul (Boisé de l'Île-des-Sœurs), preserves the natural woodland of Nuns' Island, home to more than a hundred species of birds as well as the scarce brown snake.[citation needed] Trails lead through the woodland. The campus of the Douglas Hospital is also a major green space open to the public.

The borough is part of the federal ridings of LaSalle—Émard—Verdun and Ville-Marie—Le Sud-Ouest—Île-des-Sœurs and is coextensive with the provincial riding of Verdun.