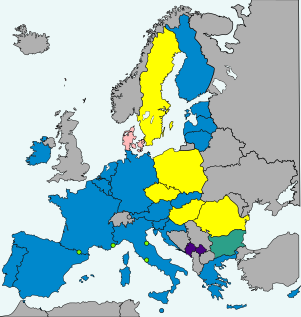 European Union (EU) member states
19 in the eurozone.
2 in ERM II, without opt-outs (Bulgaria and Croatia).
1 in ERM II, with an opt-out (Denmark).
5 not in ERM II, but obliged to join the eurozone on meeting convergence criteria (Czech Republic, Hungary, Poland, Romania, and Sweden).
Non-EU member states
4 using the euro with a monetary agreement (Andorra, Monaco, San Marino, and Vatican City).
2 using the euro unilaterally (Kosovo[a] and Montenegro).

Vatican euro coins are issued by the Philatelic and Numismatic Office of the Vatican City State and minted by Istituto Poligrafico e Zecca dello Stato (IPZS), in Rome, Italy. The euro is the official currency of the Vatican City, although Vatican City is not a member of the Eurozone or the European Union.

For images of the common side and a detailed description of the coins, see euro coins.

The initial series of Vatican euro coins featured an effigy of Pope John Paul II. They were issued only in collector sets and bore an extreme markup with the 2002 collector set costing well over a thousand euro.[1]

Following the death of Pope John Paul II in April 2005, Vatican City issued special coins during the period of Sede vacante depicting the emblem of the Apostolic Chamber (i.e. two crossed keys beneath an umbraculum, or umbrella) and the coat of arms of the Camerlengo of the Holy Roman Church, at the time Cardinal Eduardo Martínez Somalo.[2]

When the new pope was elected, the third series of Vatican euro coins were issued on 27 April 2006 and feature the effigy of Pope Benedict XVI. The coins carry an inscription "Città del Vaticano" and the twelve stars of Europe. The details of this design are published in the Official Journal of the European Union.[3]

A series of Vatican euro coins featuring effigies of Pope Francis was released in March 2014.[4] Three different images of Francis were used.[5]

The Commission of the European Communities issued a recommendation on 19 December 2008, a common guideline for the national sides and the issuance of euro coins intended for circulation. One section of this recommendation stipulates that:

Article 5. Changes to the national sides of regular euro coins intended for circulation:

"... the designs used for the national sides of the euro coins intended for circulation denominated in euro or in cent should not be modified, except in cases where the Head of State referred to on a coin changes ... A temporary vacancy or the provisional occupation of the function of Head of State should not give the right to change the national sides of the regular euro coins intended for circulation."

In addition, in 2014 the Vatican issued commemorative €20 and €50 coins honoring Pope John XXIII and Pope John Paul II respectively.[5] Both popes were canonized in April 2014.[8]