Vasili Shuisky at the Warsaw Sejm 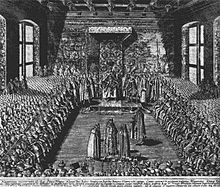 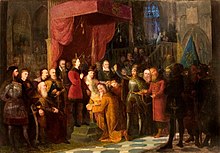 Vasili IV (Russian: Василий IV Иванович Шуйский, Vasiliy Ivanovich Shuisky, 22 September 1552 – 12 September 1612), also called Basil IV, was Tsar of Russia between 1606 and 1610 after the murder of False Dmitriy I. His reign fell during the Time of Troubles. He was the only member of House of Shuysky to become Tsar and the last member of the Rurikid dynasty to rule until the end of monarchy.

He was a son of Ivan Andreyevich Shuisky. Born Prince Vasili Ivanovich Shuisky, he was descended from sovereign princes of Nizhny Novgorod and a 20th generation male line descendant of the Varangian prince Rurik. He was one of the leading boyars of Tsardom of Russia during the reigns of Feodor I and Boris Godunov. In all the court intrigues of the Time of Troubles, Vasily and his younger brother Dmitry Shuisky usually acted together and fought as one.[1]

It was he who, in obedience to the secret orders of Tsar-to-be Boris, went to Uglich to inquire into the cause of the death of the Tsarevich Dmitry Ivanovich, the youngest son of Ivan the Terrible, who had perished there in mysterious circumstances. Shuisky reported that it was a case of suicide, though rumors abounded that the Tsarevich had been assassinated on the orders of the regent Boris Godunov. Some suspected that Dmitry escaped the assassination and that another boy was killed in his place, providing impetus for the repeated appearance of impostors (See False Dmitry I, False Dmitry II, and False Dmitry III). On the death of Boris, who had become tsar, and the accession of his son Feodor II, Shuisky went back upon his own words in order to gain favour with the pretender False Dmitriy I, who was attempting to gain the throne by impersonating the dead Tsarevich. Shuisky recognized the pretender as the "real" Dmitry despite having earlier determined the boy had committed suicide, thus bringing about the assassination of the young Feodor.[1]

Shuisky then turned against the false Dmitriy and brought about his death (in May 1606) by stating that the real Dmitriy had indeed been slain and that the reigning tsar Dmitriy was an impostor. After Dmitriy's death Shuisky's adherents proclaimed him tsar, on 19 May 1606. He reigned until 19 July 1610, but was never generally recognized. Even in Moscow itself he had little or no authority, and he only avoided deposition by the dominant boyars because they had no one to replace him with.[1]

The popularity of his cousin, Prince Mikhail Skopin-Shuisky, who commanded an army aided by a small allied Swedish army led by Jacob de la Gardie, demanding cessions of Russian territory in Karelia in return, allowed Shuisky, for a time, to remain on his unstable throne. In 1610, he was deposed by his former adherents Princes Vorotynsky and Mstislavsky. He was made a monk and eventually transported together with his two brothers to Warsaw by the Polish hetman Stanisław Żółkiewski. He died a prisoner in the castle of Gostynin, near Warsaw, in 1612,[1] followed soon by his brother Dmitry. The Romanovs, elected in 1613, did recognize Vasili posthumously as a legal tsar, and during their negotiations with the Polish authorities constantly demanded the right to rebury his body in Russia. Following the Treaty of Polyanovka in 1635, Vasili's remains were finally returned to Moscow and laid to rest in the Archangel Cathedral.

Vasili Shuisky was married twice. His first wife, Elena Mikhailovna Repnina, died prior his election to tsardom, and he had no children from that marriage. After his coronation, Vasili remarried Princess Ekaterina Buynosova-Rostovskaya, whose name was changed to Maria, deemed more suitable for a tsarina consort. They had two daughters together, Princesses Anna and Anastasia of all the Russias, but both died in infancy during their father's reign, and were buried in the Old Maiden's Convent in Kremlin. As both brothers of Vasili, Princes Dmitri Shuisky and Ivan Shuisky the Button, died also childless, the Shuiskys' princely house became extinct after the death of the latter in 1638.

The future Tsar Vasili IV serves as a character in Alexander Pushkin's blank verse drama Boris Godunov and Modest Mussorgsky's opera of the same name. In both depictions, the character is an adviser to Boris Godunov and a master of palace intrigue. Despite being fully aware that Tsar Boris ordered the assassination of the child Tsarevich Dmitriy, Vasili Shuisky remains outwardly loyal, only switching his support to the Pretender when the latter appears likely to win. Pushkin later described his intention to write further plays about the Time of Troubles.

About Vasili Shuisky, Pushkin wrote, "I intend to return to Shuisky also. In the historical account he shows a singular mixture of audacity, flexibility, and strength of character. Lackey of Godunov, he is one of the first boyars to go over to Dmitri's side. He is the first one who conspires, and note this, he is the one who risks himself; he is the one who vociferates, who accuses, who after being chief becomes a soldier in the front ranks. He is about to lose his head, Dmitri pardons him when he's already on the scaffold, he exiles him, and with the thoughtless generousity of this amiable adventurer, he recalls him to court, and covers him with gifts and honors. What does Shuisky do—he who has come so close to the hatchet and the block? He has nothing more important to do than conspire anew, to succeed, to have himself elected Tsar, to fall and during his fall to preserve more dignity and strength of spirit than he had ever had in his entire life."[2] Only Pushkin's death in a duel at the age of 37 prevented him from composing further plays about the reigns of Tsars Dmitriy and Vasili IV.