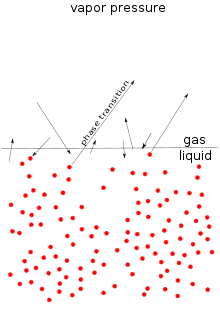 The microscopic process of evaporation and condensation at the liquid surface.

If vapor pressure exceeds the thermodynamic equilibrium value, condensation occurs in presence of nucleation sites. This principle is indigenous in cloud chambers, where ionized particles form condensation tracks when passing through. 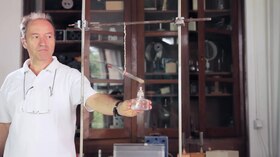 Play media
The "Pistol Test Tube" experiment. The tube contains alcohol and is closed with a piece of cork. By heating the alcohol, the vapors fill in the space, increasing the pressure in the tube to the point of the cork popping out. (Warning: this experiment should only be performed with safety glasses on!)

The vapor pressure that a single component in a mixture contributes to the total pressure in the system is called partial pressure. For example, air at sea level, and saturated with water vapor at 20 °C, has partial pressures of about 2.3 kPa of water, 78 kPa of nitrogen, 21 kPa of oxygen and 0.9 kPa of argon, totaling 102.2 kPa, making the basis for standard atmospheric pressure.

Vapor pressure is measured in the standard units of pressure. The International System of Units (SI) recognizes pressure as a derived unit with the dimension of force per area and designates the pascal (Pa) as its standard unit. One pascal is one newton per square meter (N·m−2 or kg·m−1·s−2).

Experimental measurement of vapor pressure is a simple procedure for common pressures between 1 and 200 kPa.[1] Most accurate results are obtained near the boiling point of substances and large errors result for measurements smaller than 1kPa. Procedures often consist of purifying the test substance, isolating it in a container, evacuating any foreign gas, then measuring the equilibrium pressure of the gaseous phase of the substance in the container at different temperatures. Better accuracy is achieved when care is taken to ensure that the entire substance and its vapor are at the prescribed temperature. This is often done, as with the use of an isoteniscope, by submerging the containment area in a liquid bath.

In a medical context, vapor pressure is sometimes expressed in other units, specifically millimeters of mercury (mmHg). This is important for volatile anesthetics, most of which are liquids at body temperature, but with a relatively high vapor pressure.

The Antoine equation[2][3] is a pragmatic mathematical expression of the relation between the vapor pressure and the temperature of pure liquid or solid substances. It is obtained by curve-fitting and is adapted to the fact that vapor pressure is usually increasing and concave as a function of temperature. The basic form of the equation is:

and it can be transformed into this temperature-explicit form:

is the absolute vapor pressure of a substance

is the temperature of the substance

A simpler form of the equation with only two coefficients is sometimes used:

which can be transformed to:

Sublimations and vaporizations of the same substance have separate sets of Antoine coefficients, as do components in mixtures.[2] Each parameter set for a specific compound is only applicable over a specified temperature range. Generally, temperature ranges are chosen to maintain the equation's accuracy of a few up to 8–10 percent. For many volatile substances, several different sets of parameters are available and used for different temperature ranges. The Antoine equation has poor accuracy with any single parameter set when used from a compound's melting point to its critical temperature. Accuracy is also usually poor when vapor pressure is under 10 Torr because of the limitations of the apparatus[citation needed] used to establish the Antoine parameter values.

The Wagner equation[4] gives "one of the best"[5] fits to experimental data but is quite complex. It expresses reduced vapor pressure as a function of reduced temperature.

Relation to boiling point of liquids 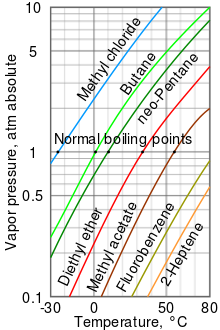 Although the relation between vapor pressure and temperature is non-linear, the chart uses a logarithmic vertical axis to produce slightly curved lines, so one chart can graph many liquids. A nearly straight line is obtained when the logarithm of the vapor pressure is plotted against 1/(T + 230)[8] where T is the temperature in degrees Celsius. The vapor pressure of a liquid at its boiling point equals the pressure of its surrounding environment.

Raoult's law gives an approximation to the vapor pressure of mixtures of liquids. It states that the activity (pressure or fugacity) of a single-phase mixture is equal to the mole-fraction-weighted sum of the components' vapor pressures:

is the mixture's vapor pressure,

is the mole fraction of component

in the liquid phase and

is the mole fraction of component

in the vapor phase respectively.

is the vapor pressure of component

. Raoult's law is applicable only to non-electrolytes (uncharged species); it is most appropriate for non-polar molecules with only weak intermolecular attractions (such as London forces).

Systems that have vapor pressures higher than indicated by the above formula are said to have positive deviations. Such a deviation suggests weaker intermolecular attraction than in the pure components, so that the molecules can be thought of as being "held in" the liquid phase less strongly than in the pure liquid. An example is the azeotrope of approximately 95% ethanol and water. Because the azeotrope's vapor pressure is higher than predicted by Raoult's law, it boils at a temperature below that of either pure component.

There are also systems with negative deviations that have vapor pressures that are lower than expected. Such a deviation is evidence for stronger intermolecular attraction between the constituents of the mixture than exists in the pure components. Thus, the molecules are "held in" the liquid more strongly when a second molecule is present. An example is a mixture of trichloromethane (chloroform) and 2-propanone (acetone), which boils above the boiling point of either pure component.

The negative and positive deviations can be used to determine thermodynamic activity coefficients of the components of mixtures.

Equilibrium vapor pressure can be defined as the pressure reached when a condensed phase is in equilibrium with its own vapor. In the case of an equilibrium solid, such as a crystal, this can be defined as the pressure when the rate of sublimation of a solid matches the rate of deposition of its vapor phase. For most solids this pressure is very low, but some notable exceptions are naphthalene, dry ice (the vapor pressure of dry ice is 5.73 MPa (831 psi, 56.5 atm) at 20 °C, which causes most sealed containers to rupture), and ice. All solid materials have a vapor pressure. However, due to their often extremely low values, measurement can be rather difficult. Typical techniques include the use of thermogravimetry and gas transpiration. 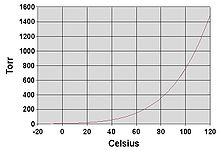 Graph of water vapor pressure versus temperature. At the normal boiling point of 100 °C, it equals the standard atmospheric pressure of 760 Torr or 101.325 kPa.
Main article: Vapor pressure of water

or transformed into this temperature-explicit form:

is the boiling point in degrees Celsius and the pressure

Dühring's rule states that a linear relationship exists between the temperatures at which two solutions exert the same vapor pressure.

The following table is a list of a variety of substances ordered by increasing vapor pressure (in absolute units).

Several empirical methods exist to estimate the vapor pressure from molecular structure for organic molecules. Some examples are SIMPOL.1 method,[12] the method of Moller et al.,[9] and EVAPORATION (Estimation of VApour Pressure of ORganics, Accounting for Temperature, Intramolecular, and Non-additivity effects).[13][14]