The Vanier Cup (French: Coupe Vanier) is the championship of Canadian university football. It is organized by U Sports football and is currently played between the winners of the Uteck Bowl and the Mitchell Bowl. It is named after Georges Vanier, the former Governor General of Canada and was first awarded in 1965 to the winner of an invitational event contested between two teams that were selected by a panel. In 1967, the trophy was declared the official "CIAU National Football Championship" and a playoff system was instituted. From its creation until 1982, it was known as the Canadian College Bowl. The game typically occurs in late November, although it is occasionally played in December.

The Laval Rouge et Or have won the most Vanier Cups (10), while the Western Mustangs have the most appearances (14). Seventeen teams have won the Vanier Cup, while three others have played for the championship but never won. There are seven active teams that have never appeared in the championship game. The 55th Vanier Cup was played on November 23, 2019 at Stade Telus in Quebec City. The Calgary Dinos defeated the Montreal Carabins 27-13 to win their fifth championship.

The Vanier Cup was played in Toronto, Ontario, from its inception in 1965 through 2003. However, after the CIS opened the game to host conference bids in 2001, the possibility arose to have games held outside Toronto. As of 2016, 41 of the 52 Vanier Cups have been played in Toronto, five in Québec City, four in Hamilton, one in Saskatoon, one in Vancouver and one in Montréal. No games have been staged in the Atlantic region. Four times, the game has been played in the same city and during the same weekend as the Grey Cup: 1973, 2007 and 2012 in Toronto [2] and in 2011 in Vancouver at BC Place Stadium.

From left to right, The Ted Morris Trophy, Vanier Cup and Bruce Coulter Trophy at the 2009 Vanier Cup at PEPS Stadium in Quebec City.

The Vanier Cup is played between the winners of the Uteck Bowl (formerly Atlantic Bowl) and the Mitchell Bowl (formerly the Churchill Bowl). The Uteck and Mitchell Bowls, in turn, are contested by the Loney Bowl (AUS), Hardy Cup (Canada West), Dunsmore Cup (RSEQ), and Yates Cup (OUA) champions.[3][4]

The Vanier Cup's most valuable player is awarded the Ted Morris Memorial Trophy. It was first awarded at the first championship in 1965 and named in honour of Teddy Morris, who died the same year. Morris, a Hall of Fame former Toronto Argonauts player and coach, was an organizer of the first bowl and champion for developing Canadian players.

The Bruce Coulter Award was first awarded in 1992 and is dependent on what position the winner of the Ted Morris Trophy played. If the winner is from the offence, then the Bruce Coulter Award winner will be the most outstanding defensive player or vice versa. It was named after Bruce Coulter, long-time Head Coach at Bishop's University and former offensive and defensive player with the Montreal Alouettes in the 1950s. Coulter was inducted as a builder in the Canadian Football Hall of Fame in 1997.[5][6][7]

In November 2010, the rights to the Vanier Cup were purchased by sports marketing company MRX.[8] The 2011 game was held in Vancouver, on the same weekend as the 99th Grey Cup and for the first time it was fully integrated into the Grey Cup Festival as a festival event.[9]

In 2012, the 48th Vanier Cup, played between Laval and McMaster at Rogers Centre in Toronto became both the most attended and most watched Vanier Cup ever. Held the same weekend and in the same city as the 100th Grey Cup, the game was attended by 37,098. The previous record was set in 1989 at the 25th Vanier Cup, when 32,847 watched the game between Western and Saskatchewan that was also played at SkyDome (now Rogers Centre).[10] The game, broadcast on TSN and RDS was watched by 910,000.[11]

In February 2013, the CIS terminated the option years on their agreement with MRX opting for an open bid process for the hosting of the game. Laval University, in Quebec City, was the only bidder for the game and won the right to host the 49th Vanier Cup.[12] In May, CIS terminated its agreement with TSN, and entered into a six-year deal with Sportsnet to broadcast its championships, including the Vanier Cup.[13] 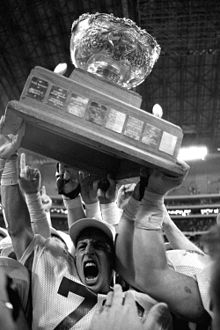 The Vanier Cup raised in 1990 by the Saskatchewan Huskies following their win over Saint Mary's. 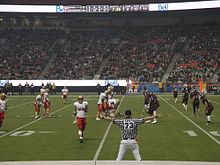 The Laval Rouge et Or vs. the McMaster Marauders in the 47th Vanier Cup.