Canadian Football League Dawson College Champlain Regional College
This article is about the Quebec college. For the York University college of the same name, see Vanier College at York University.

Vanier College offers over twenty-five programs of study in both two-year pre-university and three-year technical fields.[1] With a student population averaging eight thousand, Vanier College is the second-largest English-language college in Québec. The college offers two types of programs: pre-university and technical. The pre-university programs, which take two years to complete, cover the subject matters which roughly correspond to the additional year of high school given elsewhere in Canada in preparation for a chosen field in university. Students graduating from a college program are prepared more adequately for university studies.[2] The technical programs, which take three years to complete, applies to students who wish to be career-ready; however, many students choose to pursue a university degree. In addition, the Continuing Education Centre offers a wide variety of credit courses and programs with flexible scheduling.

The College of General and Professional Education is affiliated with the Association of Canadian Community Colleges (ACCC) and Canadian Colleges Athletic Association (CCAA).

The college participates as the Vanier Cheetahs in the Canadian Colleges Athletic Association and the Quebec Student Sport Federation, and is known for its men's and women's basketball, football (soccer) and rugby union teams, men's Canadian football teams, and women's flag football teams.[3] 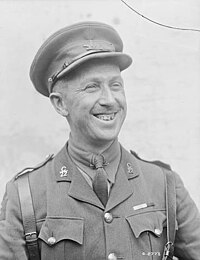 Vanier as seen from Sainte-Croix boulevard.

Vanier College today consists of 10 different buildings on a single campus. Each of its buildings was built at a different point in the college's history, and is identified by a letter of the alphabet.

The land that the campus is located on today was first used for the Village de Saint-Laurent chapel, opened in 1817. Thirty years later, a convent, known as the Couvent Notre-Dame-des-Anges, was built nearby by the Sisters of Holy Cross (fr: Sœurs de Sainte-Croix[4]). The original Convent building was later expanded into the building known as the "C building" today. [1]

In 1897, the sisters opened the first college on the campus land, on the location of today's "E building". That building was expanded in 1848 and 1857 to become today's "E building".[2] In 1873, a chapel was built that connected the convent and college buildings. That chapel was a forerunner of today's "F building".[3] The "B building" was a further expansion of the convent built on the north side of the "C building" in 1904. It was unclear exactly when the "D building" was built, but it appears to have been at around this same time. The "D building" connected to the rear (east side) of the original "F building" chapel.

Originally, both the "D" and "E" buildings had elaborate balconies on every floor, which were removed in the 1970s. This is why several windows on both buildings today are taller than the rest of the windows in the building - these windows were doors to the balconies in the original building design.[4]

In 1911, the original Village de Saint-Laurent chapel was demolished, to be replaced by a new school for young girls, Académie Saint-Alfred. The cupola at the top of the new building was designed to reflect a similar cupola on the original chapel building. This new building eventually became Vanier's "H building".[5]

In 1933, the Sisters opened the yet another college, Collège Basile-Moreau, within the existing convent buildings. This soon required further expansions to the campus. In the 1940s, the "A building" was built at the north end of the "B building".[6]

In the 1950s, the original "F building" chapel was demolished and replaced with the building that stands as the "F building" today. In 1967, several institutions were merged and became public ones, when the Quebec system of CEGEPs was created. 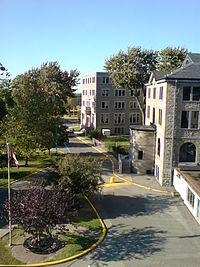 A view of the campus

In 1970, the Quebec government purchased the entire property and it was re-opened as Vanier College, Quebec's second English language public college (after Dawson College that had opened the year previous). Enrollment in its first year was approximately 1,400 students.[7]