The Vancouver Sun is a daily newspaper first published in British Columbia on 12 February 1912. The paper is currently published by the Pacific Newspaper Group, a division of Postmedia Network. It is published six days a week, Monday to Saturday.

Now combined with The Province newspaper, the Sun still has the largest newsroom of any newspaper in western Canada.[citation needed] The Sun is a broadsheet newspaper and was not originally related to the Sun Media chain and its tabloid Sun papers in Toronto, Ottawa, Winnipeg, Calgary, and Edmonton. However, Sun Media was acquired by Postmedia in 2015, making the Vancouver Sun and the tabloid Sun papers part of the same company.[1] 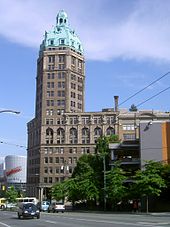 When the Sun began operation, it was published at 125 West Pender Street, just around the corner from The Province, its rival at the time. From 1917 until his death in 1936, its publisher was Robert James Cromie.[2]

In 1924, the Sun bought the Vancouver World newspaper, which had been in financial difficulty for some time.

In March 1937, a fire destroyed the Sun's business and editorial offices. The only casualty was the janitor, who suffered minor burns and smoke inhalation. The Sun promptly moved across the street into the World Building, where the World had been published. The building was accordingly renamed the Sun Tower.

In 1958, the Sun and the Province joined to create the Pacific Press in response to the rising costs of producing newspapers. First the papers merged their mechanical and financial departments, then they both moved into the Pacific Press Building on December 27, 1965.

The newspaper's photography department became the first in the world to fully switch over to digital photography following the 1994 release of the Kodak DCS 400 series, which used a Nikon F90 body; the camera was developed by Kodak in collaboration with The Associated Press and each unit cost $16,950.[3] Later in 1997 the paper moved to Granville Square.

In 1997, Kennedy Heights, the printing press for the Vancouver Sun and The Province, was opened in Surrey.

In May 2009, the newspaper laid off long-time editorial cartoonist Roy Peterson who had been drawing for the paper since 1962.[4]

In December 2011, after much research on the demographics of the greater Vancouver area, the newspaper launched a Chinese-language version Taiyangbao[5][6][dead link] with original Chinese language content. According to an article broadcast on China Now on China Radio International (December 2011), the key to success was not necessarily to "translate" its English-language version into Chinese.[7]

In 2017, the Vancouver Sun and Province moved to east Vancouver, to the Broadway Tech Centre.

The Vancouver Sun has seen, like most Canadian daily newspapers, a decline in circulation. Its total circulation dropped by 22 percent to 136,787 copies daily from 2009 to 2015.[9] 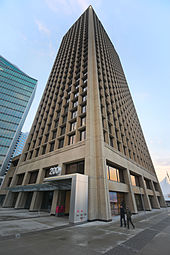 Granville Square, the tower which housed both the Sun and the Province from 1997 to 2017.