Breastplate Components of medieval armour Couter
This article is about the forearm guards in plate armour. For the circular disc on a lance, see vamplate. 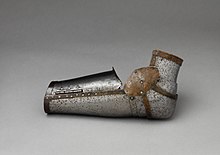 A left-arm vambrace; the bend would be placed at the knight's elbow

Vambraces (French: avant-bras, sometimes known as lower cannons in the Middle Ages) or forearm guards are tubular or gutter defences for the forearm worn as part of a suit of plate armour that were often connected to gauntlets. Vambraces may be worn with or without separate couters in a full suit of medieval armour. The term originates in the early 14th century. They were made from either boiled leather or steel. Leather vambraces were sometimes reinforced with longitudinal strips of hardened hide or metal, creating splinted armour.[citation needed]