Valdez (/vælˈdiːz, vəlˈdɛz/; Alutiiq: Suacit) is a city in the Chugach Census Area[a] in the U.S. state of Alaska. According to the 2010 US Census, the population of the city is 3,976, down from 4,036 in 2000. The city was named in 1790 after the Spanish Navy Minister Antonio Valdés y Fernández Bazán. A former Gold Rush town, it is located at the head of a fjord on the eastern side of Prince William Sound. The port did not flourish until after the road link to Fairbanks was constructed in 1899. It suffered catastrophic damage during the 1964 Alaska earthquake, and is located near the site of the disastrous 1989 Exxon Valdez oil tanker spill. Today it is one of the most important ports in Alaska, a commercial fishing port as well as a freight terminal. 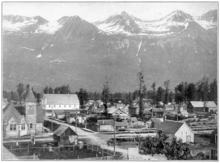 The port of Valdez was named in 1790 by the Spanish explorer Salvador Fidalgo after the Spanish naval officer Antonio Valdés y Fernández Bazán.[5] A scam to lure prospectors off the Klondike Gold Rush trail led to a town being developed there in 1898. Some steamship companies promoted the Valdez Glacier Trail as a better route for miners to reach the Klondike gold fields and discover new ones in the Copper River country of interior Alaska than that from Skagway. The prospectors who believed the promotion found that they had been deceived. The glacier trail was twice as long and steep as reported, and many men died attempting the crossing, in part by contracting scurvy during the long cold winter without adequate supplies. The town did not flourish until after the construction of the Richardson Highway in 1899, which connected Valdez and Fairbanks. With a new road and its ice-free port, Valdez became permanently established as the first overland supply route into the interior of Alaska. The highway was open in summer-only until 1950, when it was operated as a year-round route.[6]

In 1907, a shootout between two rival railroad companies ended Valdez's hope of becoming the railroad link from tidewater to the Kennicott Copper Mine. The mine, located in the heart of the Wrangell-St. Elias Mountains, was one of the richest copper ore deposits on the continent. The exact location of the right-of-way dispute, in which one man was killed and several injured, is located at the southern entrance of Keystone Canyon on the Valdez side. A half-completed tunnel in the canyon marks the end of railroad days in Valdez. A rail line to Kennicott was later established from the coastal city of Cordova.[6]

The city of Valdez was badly shaken but not destroyed in the 1964 Good Friday earthquake. Soil liquefaction of the glacial silt that formed the city's foundation led to a massive underwater landslide, which caused a section of the city's shoreline to break off and sink into the sea. The underwater soil displacement caused a local tsunami 30 feet (9.1 m) high that traveled westward, away from the city and down Valdez Bay. 32 men, women, and children were on the city's main freight dock to help with and watch the unloading of the SS Chena, a supply ship that came to Valdez regularly. All 32 people died as the dock collapsed into the ocean with the violent landslide. There were no deaths in the town.

The Valdez townsite was abandoned and relocated following the 1964 earthquake and was used as a pipe yard for the construction of the Trans-Alaska Pipeline System, as shown in this 1974 photo

Residents continued to live there for an additional three years while a new site was being prepared on more stable ground four miles (6 km) away. The new construction was supervised by the Army Corps of Engineers. They transported 54 houses and buildings by truck to the new site, to re-establish the new city at its present location. The original town site was dismantled, abandoned and eventually burned down.[6]

From 1975 to 1977, the Trans-Alaska pipeline was built to carry oil from the Prudhoe Bay oil fields in northern Alaska to a terminal in Valdez, the nearest ice-free port.[7][8] Oil is loaded onto tanker ships for transport. The construction and operation of the pipeline and terminal boosted the economy of Valdez. The first tanker to be loaded with pipeline oil was the ARCO Juneau in early August 1977, bound for the Cherry Point Refinery in Washington.[9]

The 1989 Exxon Valdez oil spill occurred as the oil tanker Exxon Valdez was leaving the terminal at Valdez full of oil. The spill occurred at Bligh Reef, about 40 km (25 mi) from Valdez. Although the oil did not reach Valdez, it devastated much of the marine life in the surrounding area. The clean-up of the oil caused a short-term boost to the economy of Valdez.

On January 24, 2014, a major avalanche occurred just outside Valdez at Mile 16 near Keystone Canyon, prompting the closure of the only highway in or out of town. On January 25, Alaska DOT triggered another massive slide that further choked the roadway. Due to weather conditions at the time, the avalanche dammed the Lowe River, creating a half-mile-long lake that stalled snow removal efforts for nearly a week. The blockage was dubbed the "Damalanche" by local city officials after a name coined by local resident, Joshua Buffington. News of this event spread to media outlets nationwide.[citation needed] Once the water receded, crews worked around the clock to clear about 200,000 cubic yards of snow in five days. No one was injured during this incident.

The port of Valdez, set against a natural backdrop of mountains under the midnight sun in July. Also visible is the shipping terminal for the Trans-Alaska Pipeline and Mt. Francis.

Valdez is located near the head of a deep fjord in the Prince William Sound in Alaska. It is surrounded by the Chugach Mountains, which are heavily glaciated. Valdez is the northernmost port in North America that is ice-free year-round. The northernmost point of the coastal Pacific temperate rain forest is in Valdez, on Blueberry Hill.[10]

Despite the presence of temperate rainforest, Valdez under the Köppen climate classification has a subarctic climate (Dfc): its winters, though much warmer than most climates of this type, are not sufficiently mild, as those of, say, Ketchikan or Kodiak are, to fit into the oceanic or subpolar oceanic climate category. 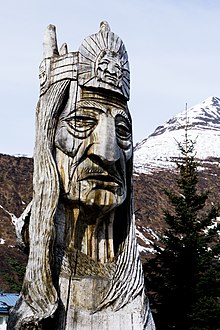 Valdez first appeared on the 1900 U.S. Census as the unincorporated village of "Valdes." It formally incorporated as Valdez in 1901, and has reported in every successive census. The original townsite was relocated in 1967 from the east side to the north side of Port Valdez after the 1964 Good Friday Earthquake, but still lays within the present city limits.

There were 1,494 households, out of which 41.5% had children under the age of 18 living with them, 56.4% were married couples living together, 8.4% had a female householder with no husband present, and 30.2% were non-families. 21.8% of all households were made up of individuals, and 2.8% had someone living alone who was 65 years of age or older. The average household size was 2.66 and the average family size was 3.15.

Valdez is a fishing port, both for commercial and sport fishing. Freight moves through Valdez bound for the interior of Alaska. Sightseeing of the marine life and glaciers, together with both deep-sea fishing, and heli skiing support a tourist industry in Valdez. The oil from the Trans-Alaska pipeline is loaded onto ships at the Valdez oil terminal.

Alyeska Pipeline Service Company is one of the biggest employers in town but it started to move several positions to its headquarters in Anchorage since the town council passed a resolution charging a tax to all the tankers coming into the port to be loaded with oil. This has had an impact in the population size and the economy.

Valdez is connected to the interior of Alaska by the Richardson Highway, and is a port of call in the Alaska Marine Highway ferry system. Just north of Valdez on the highway is Thompson Pass, which has spectacular waterfalls and glaciers next to the highway. Thompson Pass is also known for treacherous driving conditions during the winter.

The Valdez Airport, also known as Pioneer Field, is serviced by one airline, Ravn Alaska.

Despite its small size, Valdez was at one time home to two weekly newspapers, the Valdez Star and the Valdez Vanguard. In 2004, the Star bought out the Vanguard.

Valdez is also home to the Last Frontier Theatre Conference, hosted by the Prince William Sound College. The annual conference attracts playwrights and actors from around the United States.

On Deadly Ground (1994) was filmed near Worthington Glacier, as well as the Valdez Civic Center and Valdez Airport, and 30 miles (48 km) outside Valdez on Thompson Pass in the Chugach Mountains.

The character William Riker, portrayed by Jonathan Frakes in the Star Trek: The Next Generation television series and subsequent movies, grew up in the town of Valdez.

Aerial view of the oil terminal

The Valdez Marine Terminal is an oil port in Valdez, at the southern end of the Alaska Pipeline. The terminal was the point of departure for the Exxon Valdez just prior to the oil spill.

There are 14 active aboveground crude oil storage tanks at the terminal, and an average of three to five oil tankers depart from the terminal each week. Since the pipeline became operational in 1976, more than 15,000 tankers full of oil have left the terminal.