VR Group, commonly known as VR, is a government-owned railway company in Finland. VR's most important function is the operation of Finland's passenger rail services with 250 long-distance and 800 commuter rail services every day.[2] With 7,500 employees and net sales of €1.251 million in 2017, VR is one of the most significant operators in the Finnish public transport market area.[3]

As part of the concern, Avecra is a subsidiary for onboard catering service, Pohjolan Liikenne for bus traffic, VR Track for developing and maintaining of infrastructure and VR Transpoint for freight. Since 2017, its headquarters is located at the Iso Paja building, previously occupied by the state-owned broadcasting company Yle, in northern-central Helsinki.

Rail transport started in Finland in 1862 between Helsinki and Hämeenlinna, and multiple main lines and smaller private railways were built in the following decades. VR mainly operated on the high-demand main lines. During the twentieth century, most private railway companies were shut down and VR assumed a monopoly in rail transport. In 1995 the company was privatised into VR Group.

Since 2010, the maintenance and the construction of the railway network have been the responsibility of the Finnish Transport Agency (Finnish: Liikennevirasto). The operation and network were originally carried out by the parent company Valtionrautatiet until 1995, when it was split into VR and the rail administration entity Ratahallintokeskus.

Altogether the group of companies includes 21 companies employing a total of about 14,400 people.

Because in most parts of Finland the density of population is low, Finland is not optimally suited for railways. Commuter services are nowadays rare outside the Helsinki area, but express trains interconnect most cities. As in France, the majority of passenger services are connections to the capital, Helsinki. In the 2010s, VR has made connections faster by reducing stops at minor stations and increasing running speeds with new locomotives and renovated high-speed trains. 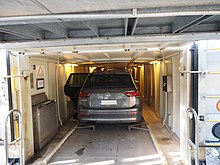 For car transport services, passengers drive their cars on board car transport wagons themselves, and then leave the wagon on foot to board a passenger wagon.

VR provides car transport services. Seven stations allow loading and unloading of cars on trains: Helsinki, Turku and Tampere in the south, Oulu further north, and Rovaniemi, Kemijärvi and Kolari in Lapland. Car transport trains stop at other stations along the way for normal passenger transport and is available as daily service to Rovaniemi and Kemijärvi and several times a week to Kolari. Finland is the only Nordic country to offer car transport on trains, however, car transport on trains is available on many European countries outside the Nordic countries.[4] In August 2021 VR will commence operating the Tampere light rail.[5]

VR operates the commuter traffic in the Helsinki area on behalf of HSL. 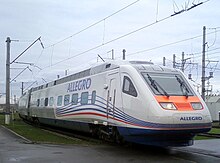 The Allegro is used between Helsinki and Saint Petersburg

There is an international passenger rail service from Finland to Russia. As of June 2011, there are four Allegro passenger trains per day to Saint Petersburg and one overnight train to Moscow via Saint Petersburg called the Tolstoi (named after Leo Tolstoy).[6] The tracks on the Helsinki – Saint Petersburg line were upgraded to enable a higher running speed up to 220 km/h before the Allegro started its service.[7] 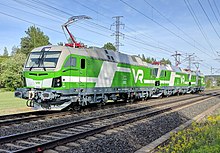 A modernised and recoloured diesel locomotive pulls a regional train to Varkaus railway station in 2011.

In October 2010, VR announced plans to renew its locomotive fleet by ordering around 200 new locomotives, which are expected to enter service in 2015–25.[9]

On 20 December 2013, VR announced plans to purchase 80 new electric locomotives, with 97 options. This upcoming Sr3 will be based on the Siemens Vectron and will replace the aging Sr1's. The locomotives will be fitted with helper diesel engines that can be used for shunting in partly unelectrified railyards. Deliveries will occur between 2017 and 2026.[10][11] 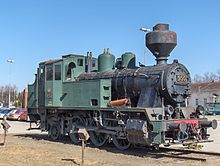 On 8 October 1942, the notation system was changed to two letters and a serial number. The first letter in the designation now signified the types of trains the locomotive was generally planned to haul:[15]

The second small letter indicated the weight of the locomotive:[15]

When diesel locomotives were taken into service in the 1950s, they were additionally differentiated by the steam locomotive classes by beginning their numbering from 11 instead of the next free number in running order. As a result, the last steam-powered heavy passenger locomotive class was designated Hr3, and its first diesel-powered counterpart Hr11.[14]

The current VR locomotive classification system was taken into use on 1 January 1976. The first (capital) letter was now used to differentiate between locomotive types: S (sähkö) for electric, D for diesel and T (työkone) for maintenance equipment. The serial numbers of diesel locomotive classes were not changed, the Hr11 class becoming Dr11. In addition to this the borderline between midweight and heavy locomotives was changed to 15.1 tons and the second letter in multiple units is always m (for moottorivaunu).[14]

Interior view of the top deck of a VR InterCity2 double-deck carriage.

The wide Finnish loading gauge allows the passenger coaches to be considerably wider than most European passenger coaches. The aisle and seats are wider than in other European trains in the standard 2+2 configuration, and in commuter traffic 3+2 seat configuration is used to allow more seats for the same train length. The last wooden-bodied carriages were withdrawn by the mid-1980s. Prior to the 1970s these had been the mainstay of VR's passenger rolling stock.

In addition to these, VR has ordered 12+13 Class Edo control cars from Transtech, eight of which have been in regular passenger traffic since 29 October 2013.[17] The cars are used in InterCity connections with the Sr2 and the upcoming Sr3 locomotives pushing the train.

First class, or Extra as VR calls it, is marked with Extra signs outside of the coaches on InterCity trains. Even restaurant coaches are marked similarly. 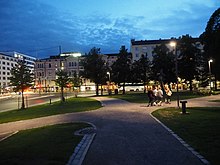 Sleeper trains between Helsinki and Lapland usually stop at Tampere for about half an hour around midnight, giving adventurous passengers time to briefly visit the city.

VR operates sleeper services between Helsinki/Turku and Lapland, which also include car-carrying (motorail) wagons. Double-deck sleeping carriages (including rooms with en suite showers and toilets) were introduced on the Helsinki–Rovaniemi service in the 2000s. These wagons are painted in a green-and-white livery similar to the InterCity coaches. Since 2016, the new coaches have begun to replace the blue carriages even on the way to Kolari.

Electrification extends from Oulu northwards to Kemijärvi.[18] In 2006, direct sleeper services were discontinued beyond Rovaniemi (to Kemijärvi) because the new double-deck sleeping carriages were unable to operate with diesel haulage. The sleeper service to Kemijärvi was restarted in March 2008, by adding to the train in Rovaniemi a new diesel generator car supplying 1 500 V electricity for the sleeper cars between Rovaniemi and Kemijärvi; this setup was continued in use until the electrification extension to Kemijärvi was completed at the end of 2013. Sleeper services between Turku and Joensuu and Helsinki and Kajaani were withdrawn in 2006, but with the new direct line between Lahti and Kerava, the daytime services were made quicker.

On 12 January 2009, VR announced they had requested tenders for the purchase of 20 new sleeping cars, valued at €60–70 million. The two bidders interested were Alstom, which manufactures the Pendolino and some commuter trains for VR, and Finnish Transtech, which manufactured VR's new sleeping cars. The decision led to the resignation of the President and CEO of VR-Group, Henri Kuitunen, and the group's Chairman of the Board, Antti Lagerroos. Helsingin Sanomat reported they had wanted to defer the replacement of older sleeping car rolling stock until 2012 at the earliest. However, the decision went ahead because VR is a state owned business and there was pressure to seek orders from Finnish Transtech, which is currently struggling due to market downturns, in order to secure jobs.[19]

The Finnish loading gauge allows the operation of freight vehicles considerably larger than most other railways in the European Union. Road trailers (often of VR's subsidiary Transpoint) can be easily accommodated on ordinary flat wagons. Much of the freight on the VR network is carried from Russia in Russian wagons, including large capacity eight-axle oil tank wagons.

VR also has a one-third ownership of SeaRail, a specialist operator of freight wagons designed for through running (via ferry) to Sweden and elsewhere in Western Europe. 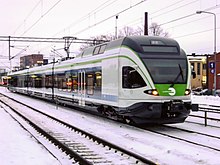 The Sm3 class Pendolino is the VR's "flagship", mainly connecting largest cities to the capital with top running speed up to 220 km/h. Other EMUs in use are the Sm1, Sm2 and Sm4 in Helsinki area commuter services. In addition, VR operates Pääkaupunkiseudun Junakalusto Oy -owned Sm5 class EMUs in Helsinki local traffic and Sm6 Allegro under a joint venture of VR and the Russian railways, Karelian Trains, between Helsinki and Saint Petersburg.

The multiple unit classification system follows a similar logic as the locomotive classification system: the first letter signifies the power source (in addition to electric and diesel, gasoline (B, bensiini) and wood gas (P, puukaasu) have been used), followed by the letter m (moottorivaunu) signifyng a multiple unit, followed by a serial number.

VR has used several liveries in the past. When InterCity traffic started during the 1980s, VR's colour scheme was changed into red and white. In 2009, VR changed its corporate colour to green[22] and all the coaches have repainted to the new colour.