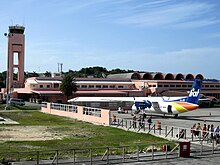 The airport originally was operated by the United States Army Air Forces.

Flying units assigned to the airfield were:

Renamed Coolidge Air Force Base in 1948, it was closed as a result of budgetary cutbacks in 1949, with right of re-entry retained by the United States. Agreements were subsequently reached with the United Kingdom and, later, the Antigua government upon independence, for the establishment and maintenance of missile tracking facilities. Antigua Air Station was established on a portion of the former Coolidge AFB. As of 2011[update], NASA continues to utilize the Antigua facility for launch tracking services on an as-needed basis; and did so for the launch of the Mars Science Laboratory on 26 November 2011.[4]

Upon the closure of the base in 1949, it became a civil airport. It was known as Coolidge International Airport until 1985, when it was named in honor of Sir Vere Cornwall Bird (1910–1999), the first prime minister of Antigua and Barbuda.

In December 2005, the Antigua and Barbuda Millennium Airport Corporation announced it would invite tenders to construct the first phase of a new passenger terminal designed to serve the airport for 30 years. In 2012, they announced the construction of its second terminal.