The county was established in 01 January 1998, when Älvsborg County, Gothenburg and Bohus County and Skaraborg County were merged.

Sweden's counties are generally of greater importance than its provinces. The counties are the main administrative units for politics and population counts.

In addition, the previous counties that were abolished in 1998 had been in use since the 17th century, and therefore have some cultural and historical significance.

Västra Götaland County borders to the counties of Värmland, Örebro, Östergötland, Jönköping and Halland. It is also bounded by the Norwegian county of Viken both with a land and maritime border, lakes Vättern and Vänern, as well as the strait of Skagerrak.

Västra Götaland was created in 1998 by a merger of the three former counties of Gothenburg and Bohus County, Älvsborg County and Skaraborg County. The seat of residence for the Governors or Landshövding is Gothenburg, while the seat of political administration and power is Vänersborg. The Governor is the head of the County Administrative Board or Länsstyrelse.

The Västra Götaland Regional Council or Västra Götalandsregionen is an evolved County Council that for a trial period has assumed certain tasks from the County Administrative Board. Similar trial councils are applied for Skåne County and Gotland County. 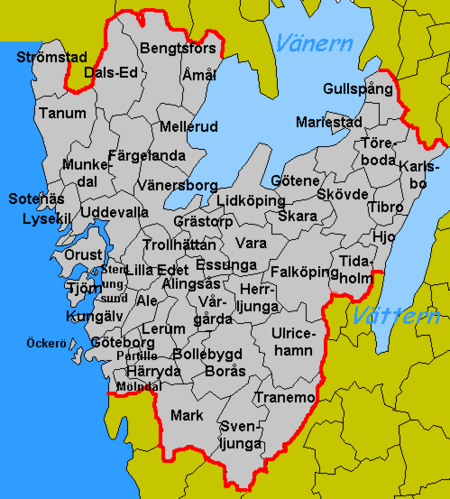