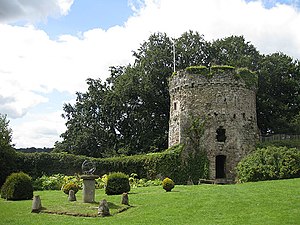 Garrison Tower from the inner ward

Usk Castle is located immediately to the north of the present day town on a hill overlooking the streets and main Tywn square. 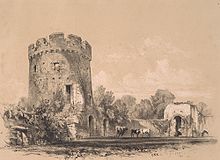 Usk castle and town was probably laid out and established in 1120, after some of the other Norman settlements and castles of the region, such as Monmouth Castle and Abergavenny Castle. However, the site had a history of previous military, strategic, and local significance, for it was here that the Romans had established their early Legionary fortress before relocating it south to Caerleon.

The Normans had to control and subjugate the region, and brought in Marcher Lord Richard Fitz Gilbert de Clare who sought to strengthen the castle's defences against Welsh attack, but he was ambushed and killed north of Abergavenny in 1136. The Welsh duly captured Usk castle again in 1184.

William Marshal was the next Marcher Lord to strengthen Usk castle. However, his conflict with King Henry III of England brought the Normans new headaches.

Gilbert de Clare, 7th Earl of Hertford, another holder of Usk castle, was killed at the Battle of Bannockburn when the English crown's focus was on defeating the Scots, and the castle was untroubled until the early 15th century. It was here, against this background, in 1352, that Adam of Usk was born.

The rebellion of Owain Glyndŵr, between 1400 and 1405, brought significant conflict to the area once again, and the Welsh forces of Owain Gyndwr attacked Usk town in 1402. The Battle of Pwll Melyn was fought nearby, and the region only stabilised under the efforts of local Welsh warrior and ally of King Henry IV of England and Monmouth-born Henry V, Davy Gam.

After the rebellion the castle passed to the Duchy of Lancaster, and, with stability restored, no further redevelopment or refortification was undertaken and the castle was allowed gradually to decay. It survived the English Civil War with only some slighting, and was eventually redeveloped when the gatehouse was adapted to a house in the 1680s.

Today, the remains are quite substantial and include some interesting elements such as the dovecote tower. Although a private residence of the Humphreys family, events are held throughout the summer months.

The Early Medieval re-enactment group Regia Anglorum has borrowed the Castle for its Autumn training for the last 6 years.