Uranium-235 (235U) is an isotope of uranium making up about 0.72% of natural uranium. Unlike the predominant isotope uranium-238, it is fissile, i.e., it can sustain a fission chain reaction. It is the only fissile isotope that exists in nature as a primordial nuclide.

Uranium-235 has a half-life of 703.8 million years. It was discovered in 1935 by Arthur Jeffrey Dempster. Its fission cross section for slow thermal neutrons is about 584.3±1 barns.[1] For fast neutrons it is on the order of 1 barn.[2] Most but not all neutron absorptions result in fission; a minority result in neutron capture forming uranium-236. 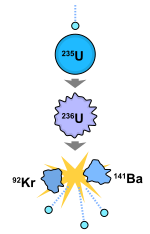 Heavy water reactors, and some graphite moderated reactors, can use natural uranium, but light water reactors must use low enriched uranium because of the higher neutron absorption of light water. Uranium enrichment removes some of the uranium-238 and increases the proportion of uranium-235. Highly enriched uranium (HEU), which contains an even greater proportion of uranium-235, is sometimes used in the reactors of nuclear submarines, research reactors and nuclear weapons.

If at least one neutron from uranium-235 fission strikes another nucleus and causes it to fission, then the chain reaction will continue. If the reaction will sustain itself, it is said to be critical, and the mass of 235U required to produce the critical condition is said to be a critical mass. A critical chain reaction can be achieved at low concentrations of 235U if the neutrons from fission are moderated to lower their speed, since the probability for fission with slow neutrons is greater. A fission chain reaction produces intermediate mass fragments which are highly radioactive and produce further energy by their radioactive decay. Some of them produce neutrons, called delayed neutrons, which contribute to the fission chain reaction. The power output of nuclear reactors is adjusted by the location of control rods containing elements that strongly absorb neutrons, e.g., boron, cadmium, or hafnium, in the reactor core. In nuclear bombs, the reaction is uncontrolled and the large amount of energy released creates a nuclear explosion.

The Little Boy gun type atomic bomb dropped on Hiroshima on August 6, 1945 was made of highly enriched uranium with a large tamper. The nominal spherical critical mass for an untampered 235U nuclear weapon is 56 kilograms (123 lb),[4] a sphere 17.32 centimetres (6.82 in) in diameter. The material must be 85% or more of 235U and is known as weapons grade uranium, though for a crude, inefficient weapon, 20% is sufficient (called weapon(s)-usable). Even lower enrichment can be used, but then the required critical mass rapidly increases. Use of a large tamper, implosion geometries, trigger tubes, polonium triggers, tritium enhancement, and neutron reflectors can enable a more compact, economical weapon using one-fourth or less of the nominal critical mass, though this would likely only be possible in a country that already had extensive experience in engineering nuclear weapons. Most modern nuclear weapon designs use plutonium-239 as the fissile component of the primary stage;[5][6] however, HEU (highly enriched uranium, uranium that is 20% or more 235U) is often used in the secondary stage as an ignitor for the fusion fuel.

Uranium-235 has many uses such as fuel for nuclear power plants, and nuclear weapons such as nuclear bombs. Some artificial satellites, such as the SNAP-10A and the RORSATs were powered by nuclear reactors fueled with uranium-235.[7][8]