Category:CS1 maint: ref=harv ISBN (identifier) Household income in the United States
Class of people in the higher end of the middle of a societal hierarchy
This article is about socio-economic studies. For the musical work, see Upper Middle Class White Trash. 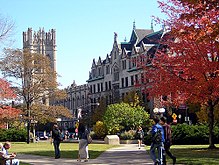 Higher education is one of the most distinguishing features of the upper middle class.

The upper middle class has grown ... and its composition has changed. Increasingly salaried managers and professionals have replaced individual business owners and independent professionals. The key to the success of the upper middle class is the growing importance of educational certification ... its lifestyles and opinions are becoming increasingly normative for the whole society. It is in fact a porous class, open to people ... who earn the right credentials.

In addition to having autonomy in their work, above-average incomes, and advanced educations, the upper middle class also tends to be influential, setting trends and largely shaping public opinion.[8] Overall, members of this class are also secure from economic down-turns and, unlike their counterparts in the statistical middle class, do not need to fear downsizing, corporate cost-cutting, or outsourcing—an economic benefit largely attributable to their postgraduate degrees and comfortable incomes, likely in the top income quintile or top third.[1]

While many Americans cite income as the prime determinant of class, occupational status, educational attainment, and value systems are equally important variables. Income is in part determined by the scarcity of certain skill sets.[1] An occupation that requires a scarce skill set which is attained through higher educational degree, and which involves higher autonomy, responsibility and influence, will usually offer higher economic compensation. Qualifying for such higher income often requires that individuals obtain the necessary skills (e.g., by attending law, medical, or postgraduate school) and demonstrate the necessary competencies.[9] There are also differences between household and individual income. In 2005, 42% of US households (76% among the top quintile) had two or more income earners; as a result, 18% of households but only 5% of individuals had six-figure incomes.[10] To illustrate, two nurses each making $55,000 per year can out-earn, in a household sense, a single attorney who makes a median of $95,000 annually.[11][12]

Sociologists Dennis Gilbert, William Thompson and Joseph Hickey estimate the upper middle class to constitute roughly 15% of the population. Using the 15% figure one may conclude that the American upper middle class consists, strictly in an income sense, of professionals with personal incomes in excess of $62,500, who commonly reside in households with six-figure incomes.[5][10][13] The difference between personal and household income can be explained by considering that 76% of households with incomes exceeding $90,000 (the top 20%) had two or more income earners.[10]

Note that the above income thresholds may vary greatly based on region due to significant differences in average income based on region and urban, suburban, or rural development. In more expensive suburbs, the threshold for the top 15% of income earners may be much higher. For example, in 2006 the ten highest income counties had median household incomes of $85,000 compared to a national average of about $50,000. The top 15% of all US income earners nationally tend to be more concentrated in these richer suburban counties where the cost of living is also higher. If middle-class households earning between the 50th percentile ($46,000) and the 85th percentile ($62,500) tend to live in lower cost of living areas, then their difference in real income may be smaller than what the differences in nominal income suggest.

Upper-middle-class people tend to highly value tertiary education for themselves and their children, favoring the pursuit of undergraduate and postgraduate degrees.

Political ideology is not found to be correlated with social class; however, a statistical relationship is seen between the level of one's educational attainment and one's likelihood of subscribing to a particular political ideology. In terms of income, liberals tend to be tied with pro-business conservatives.[16] Most mass affluent households tend to be more right-leaning on fiscal issues but more left-leaning on social issues.[17] The majority, between 50% and 60%, of households with incomes above $50,000 overall, not all of whom are upper middle class,[7] supported the Republican Party in the 2000, 2004, and 2006 elections.[18][18][19] Those with postgraduate degrees in education statistically favor the Democratic Party.[19][20][21] For example, in 2005, 72% of surveyed full-time faculty members at four-year institutions, the majority of whom would be considered upper middle class,[1] identified themselves as liberal.[22]

The upper middle class is often the dominant group to shape society and bring social movements to the forefront. Movements such as the peace movement, the anti-nuclear movement, environmentalism, the anti-smoking movement, and even in the past with blue laws and the temperance movement have been in large part (although not solely), products of the upper middle class. Some claim this is because this is the largest class (and the lowest class) with any true political power for positive change, while others claim some of the more restrictive social movements (such as with smoking and drinking) are based upon "saving people from themselves."[3]

The upper middle class in Britain traditionally consists of the educated professionals who were born into higher income backgrounds, such as legal professionals or executives. This stratum, in England, traditionally uses Received Pronunciation natively. A typical Mosaic geodemographic type for this group would be cultural leadership. It is also usually assumed that this class is most predominant in the home counties of South East England and the more affluent boroughs of London. Children of this group are often educated at a preparatory school until about 13 years old and then at one of the "major" or "minor" British public schools[23][24] which will typically charge fees of at least £11,500 per year per pupil (as of 2013)[25][26] followed by studying at post-graduation level.