University of the South Pacific

The University of the South Pacific (USP) is an intergovernmental organisation and public research university with locations spread throughout a dozen countries in Oceania. It is an international centre for teaching and research on Pacific culture and environment.

The British colonial link and the establishment of the University of the South Pacific in 1968 allowed the education system to follow suit from the qualification system of the Commonwealth of Nations.[1][2]

Despite its multi-campus nature, the USP is not a university system. It is a single university with several branches across the Pacific Region. USP's Laucala campus in Fiji is the main campus of the University, also serving as its administrative centre.[4]

USP is organized into three main faculties: the Faculty of Arts, Law and Education; the Faculty of Business and Economics; and the Faculty of Science, Technology and Environment.[5] The faculties and their associated schools offer undergraduate and postgraduate study programmes including:

USP's main campus, called Laucala, lies on Laucala Bay in Fiji's capital of Suva. It also has two other satellite campuses in Fiji: Labasa and Lautoka. The Alafua campus in Samoa hosts the School of Agriculture and Food Technology. The Emalus campus in Vanuatu is the location for the School of Law.[6] The Nuku-alofa campus in Tonga is where the Institute for Education, directed by Seu'ula Johansson-Fua is based.[7]

In addition, USP operates 11 regional centres based in Pacific islands countries. The region served by USP covers 33 million km2 of the Pacific Ocean, an area more than three times the size of Europe. In contrast, the total land mass of territories served corresponds to the area of Denmark. Populations of member countries vary from Tokelau with 1,500 people to Fiji with more than 900,000 people. (The population of the region is about 1.3 million.)

Campus in Teaoraereke, Kiribati, in 2011 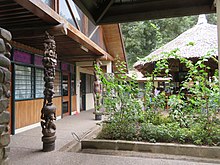 Campus in Honiara, Solomon Islands, in 2019

The following are the extension campuses of the university, aside from its campuses in Fiji, Samoa, and Vanuatu.

In 2019, Vice-Chancellor Pal Ahluwalia made some allegations about a group of individuals who had a record of mismanagement at USP over the years during the leadership of previous VC, Prof. Rajesh Chandra.[8] This led to an audit and investigation by Auckland accounting firm BDO, who compiled a report over 100 pages that was leaked online.[9] In June 2020, a special council meeting led by Pro-Chancellor Winston Thompson led to the suspension of Vice-Chancellor Pal Ahluwalia who was later reinstated after a number of protests by student and staff bodies in the region. The report shows that several individuals were holding key positions with a pay range of over 300,000–400,000 FJD which were above their pay range and questionable for a small-scale unranked university. These were never advertised which include some of the Directors, Deans and the Deputy Vice-Chancellor positions. It also highlights the list of bonuses and payments received by the selected group of individuals which called for further investigation by FICAC and the Fijian government.[10]