After securing land and funding from the City of Stevens Point and Portage County and winning the right to host the new normal school, Stevens Point Normal School opened on September 17, 1894 with 201 students.[2] In addition to teacher preparation, "domestic science" (home economics) and conservation education were offered; the latter formed the basis for the College of Natural Resources, nationally recognized[citation needed] for undergraduate and graduate training in natural resources.

In 1940, William C. Hansen began his 22-year tenure as the institution's longest-serving president.[3] Ever larger numbers of students in the 1950s and 1960s led to construction on campus throughout the 1960s and early 1970s. It was during this period, in 1964, that the college was elevated to university status as Wisconsin State University–Stevens Point and began offering graduate degrees. Seven years later, the Wisconsin State Universities merged into the University of Wisconsin system, and the school adopted its current name. UW-Stevens Point has more than 77,000 alumni. More than half of these alumni live in Wisconsin. In 1968, UW-Stevens Point formed the Northwoods battalion, an ROTC unit for the United States army.

Lee S. Dreyfus became chancellor in 1974 before becoming Wisconsin's 40th governor. Governor Dreyfus was inaugurated on the lawn in front of Old Main on the UW-Stevens Point campus in 1979.

In 2007, a sustainability task force was created to help achieve the future goal of a carbon neutral campus.

In 2009, Chancellor Linda Bunnell resigned after a student vote of no-confidence.[4] The vote in part was called because of an automobile accident she failed to report and allegations of drunken driving.[5] Bernie Patterson became chancellor in July 2010.[6] 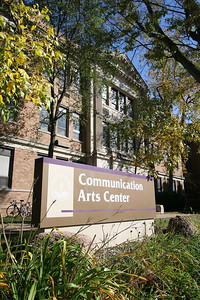 The Communication Arts Building, the headquarters for the WWSP-FM trivia contest

The Schmeeckle Reserve, a nature reserve, is on campus.

The University of Wisconsin–Stevens Point offers more than 120 undergraduate programs in 48 majors and 78 minors. These programs are housed within four colleges:

In 2018 U.S. News and World Report ranked UW-Stevens Point 12th among regional universities in the Midwest.

UW-Stevens Point has two satellite campuses, in Marshfield and Wausau.

The university has three off-site field stations: Central Wisconsin Environmental Station (CWES) at Amherst Junction, Treehaven near Tomahawk, and the Northern Aquaculture Demonstration Facility at Bayfield. CWES is on 200 acres near Sunset Lake, 17 miles east of Stevens Point. Treehaven is between Tomahawk and Rhinelander, Wisconsin on 1,400 acres. The Northern Aquaculture Demonstration Facility is at 36445 State Highway 13, 1.5 miles west of Red Cliff on Highway 13, near Lake Superior.

UW-Stevens Point works towards waste reduction and diversion and recognizes the need to move toward a zero-waste campus by continuing to reduce, reuse and recycle more each year. The university is committed to reducing energy consumption through conservation and efficiency, and offsetting its total carbon emissions through green electricity purchases, composting and managed forests.

WWSP-FM is the University of Wisconsin–Stevens Point's alternative radio station. Operating at 30,000 watts, WWSP broadcasts commercial free on 89.9FM, 365 days a year. WWSP hosts the world's largest trivia contest,[citation needed] which was founded in 1969 and has since become a tradition for the university and the community. Hundreds of teams with thousands of members participate in the contest every year, usually in April.

SPTV is a student-operated television station at UW Stevens Point. It is broadcast on channel 98 and online on SPTV's website. SPTV's office and studios are in the Communication Arts Center on the UWSP campus. The station airs news, sports, and entertainment shows.

The Pointer, the weekly student newspaper, is free to all tuition-paying students.

The UW-Stevens Point football team holds the annual Spud Bowl game sponsored by local potato farms and brewery companies as the first home game of the season. The Pointers also hold the annual Pink Game, which benefits the Susan G. Komen Foundation of Central Wisconsin, and the Circle of Friends Foundation, which provides opportunities to kids with cancer. The Pointers play their home games at Goerke Field.