The University of Winnipeg (UWinnipeg, U of W) is a public research university in Winnipeg, Manitoba, Canada, that offers undergraduate faculties of art, business and economics, education, science and kinesiology and applied health as well as graduate programs. UWinnipeg's founding colleges were Manitoba College and Wesley College, which merged to form United College in 1938. The University of Winnipeg was established in 1967 when United College received its charter. The governance was modeled on the provincial University of Toronto Act of 1906 which established a bicameral system of university government consisting of a senate (faculty), responsible for academic policy, and a board of governors (citizens) exercising exclusive control over financial policy and having formal authority in all other matters. The president, appointed by the board, was a link between the bodies to perform institutional leadership.[3]

The University's current president and vice-chancellor, Annette Trimbee, announced her resignation in March 2020. UWinnipeg's interim president will be James Currie, vice-president academic and provost until a new president is appointed.[4]

Maclean's magazine and The Globe and Mail newspaper consistently rank the university in the top fifteen of all Canadian universities whose primary focus is undergraduate education in the category of student satisfaction. In 2013 the U of W ranked 13th out of 19 primarily undergraduate institutions.[5] 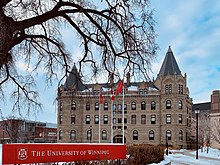 The University of Winnipeg

The U of W's founding colleges were Manitoba College, 1871, and Wesley College, 1888, which merged to form United College in 1938.[6][7] In 1967, United College received a charter and became the University of Winnipeg. George Creeford Browne (architect) & S. Frank Peters designed Wesley Hall (1894–5), which is now part of the University of Winnipeg.[8] 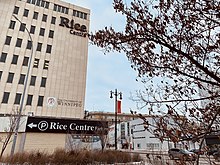 Rice Centre with the Buhler Centre seen in the back 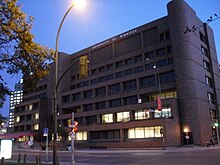 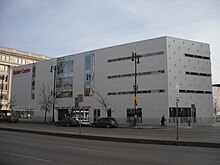 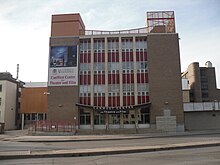 The campus of The University of Winnipeg is made up of 23 buildings spreading over several full blocks of Downtown Winnipeg, located directly on Portage Avenue.[11] Over the past decade, the campus has undergone over 10 new building construction or major renovation projects. Through its revitalization, the University has become an engine for downtown renewal and improvement.[12]

Wesley Hall is a stone-clad brick structure built in 1894–95 and is on the Registry of Historic Places of Canada.[13] It is located on 515 Portage Ave. near Portage Place Mall.

The Buhler Centre was constructed to house the Faculty of Business and Economics, as well as PACE (Professional, Applied and Continuing Education), a division of the University of Winnipeg. The doors to the Buhler Centre opened September 2010.[14] Designed by PSA+DPA+DIN collective a collaborative effort between Peter Sampson Architecture Studio inc, David Penner Architect, and DIN Projects. The Buhler Centre also houses the Plug In Institute of Contemporary Art and Stella's Cafe on the main floor.

The Institute for stained glass in Canada has documented the stained glass at the University of Winnipeg. Specifically at the convocation hall.[15]

In 2008, the university announced that Raymond L. McFeetors, Chairman of The Great West Life Assurance Company, had donated $2.67 Million for a dormitory to be built on newly acquired property west of the campus.[16] The money came from his personal resources and from Great West Life. 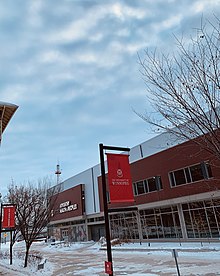 Marsha Hanen Way with the Health & RecPlex in the back.

The university president sits as the chair of the corporation and participates in its business partnerships.

The structure of the UWCRC is unique in Canada as it allows the corporation to avoid being governed by the strictures of university governance.[18] The corporation serves as "a primary engine for the redevelopment of Winnipeg’s downtown", a task traditionally undertaken by government and the private sector, and not educational institutions.[18]

Recent initiatives include the newly renovated Asper Centre for Theater and Film, Richardson College for the Environment and Science Complex, The Axworthy Health and RecPlex, McFeetors Hall (a new student residence) and the UWSA Daycare.[17] A new mixed use 14-story apartment complex for students and the community began construction in 2015.[17]

The financial statements of the corporation are not publicly available under public disclosure legislation. The corporate draws its operating funds entirely from the university budget.[17][19]

Master in Sacred Theology and Master of Arts Spiritual Disciplines & Ministry Practices are under review. Applications are not currently being accepted by the University of Winnipeg.[23]

Joint programs with the University of Manitoba

The University of Winnipeg offers several programs and services to Aboriginal people. It is the first university to mandate that all students take an Indigenous course requirement as part of their degree. The course was added by the University of Winnipeg in support and compliance with the recommendations by the Truth and Reconciliation Commission of Canada.[24]

Through its Wii Chiiwaaknak Learning Centre, Eco-Kids Program and Eco-U Summer Camp services, the University of Winnipeg actively partners with Aboriginal communities. The University of Winnipeg is now offering the only master's degree in Development Practice with a focus on Indigenous Development in the world, joining a network of 22 prestigious universities globally with support from the MacArthur Foundation.[26]

In 2012, the university named broadcaster Wab Kinew as its first Director of Aboriginal Inclusion,[27] a position designed to oversee the expansion of culturally inclusive outreach efforts and program development in First Nations education.[27]

The Collegiate was created within Wesley College in 1873. At the time it was the only secondary school in Manitoba.[29] 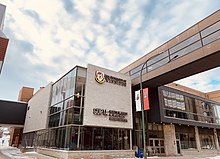 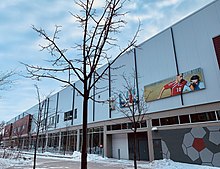 The university is represented in U Sports by the Winnipeg Wesmen in volleyball, basketball, soccer, wrestling, as well as baseball. The U of W built a new field house (" The RecPlex"), named after Lloyd Axworthy, adjacent to the Duckworth Centre that provides indoor soccer services and smoothies.[30]

The University of Winnipeg Library supports the teaching and research needs of the university community through consultation services, research materials access, and spaces for study. In addition to administration of the Library, The Dean of the Library manages a portfolio that includes the copyright office, archives, art gallery, anthropology museum, and WinnSpace, the university's institutional repository.[31] The library facility occupies the 4th and 5th floors of Centennial Hall, which was featured on the March 1973 cover of Progressive Architecture.[32]

The Anthropology Museum holds collections in ethnology, archaeology, primatology and hominid osteology which support the research, teaching, and public service functions of the Anthropology Department.[33]

Gallery 1C03 is the campus art gallery, located in Centennial Hall. The mission of the gallery is to, "engage diverse communities through the development and presentation of contemporary and historical art exhibitions and related programming initiatives."[36] The gallery shows Manitoban, Canadian as well as international artists.[37] The gallery also works to develop, preserve and present the university's art collection.[37] 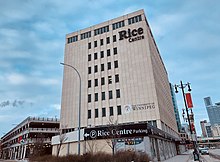 The University of Winnipeg's administration offices and the student services centre are located at the Rice Centre.

The University of Winnipeg is a provincially and privately funded post-secondary institution with undergraduate and a growing number of graduate programs including Canada's only master's degree in development practice with a focus on Indigenous development, as well as a professional, applied and continuing education and a high school division.

It has had seven presidents since 1967 and Patrick Deane as an acting president for one school year.[38] 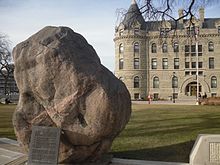 The granite boulder on the U of W's front lawn.

The University of Winnipeg has held their annual UWinnipeg Duckworth Great Rock Climb for over 67 years. The rock climb is traditionally held at the beginning of classes each year, on the front lawn of Portage Commons. The competition involves teams of three racing from Wesley Hall to the granite boulder monument on campus. The team to run and climb the rock the fastest wins. The fastest record was made at 9.4 seconds in 1979.[40]