The University of Tasmania (UTAS) is a public research university primarily located in Tasmania, Australia. Founded in 1890,[6] it is Australia's fourth oldest university. Christ College, one of the university's residential colleges, was founded in 1846 and is the oldest tertiary institution in the country. It is a sandstone university and a member of the international Association of Commonwealth Universities[7] and the Association of Southeast Asian Institutions of Higher Learning.[8]

The university offers various undergraduate and graduate programs in a range of disciplines, and has links with 20 specialist research institutes and co-operative research centres.[9] Its Institute for Marine and Antarctic Studies has strongly contributed to the university's multiple 5 rating scores (well above world standard) for excellence in research awarded by the Australian Research Council. The university also delivers tertiary education at the Australian Maritime College, the national centre for maritime education, training and research. 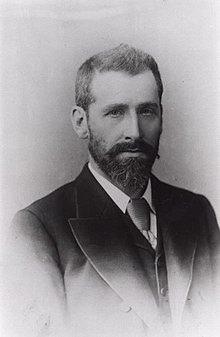 Andrew Inglis Clark a major contributor to the Constitution of Australia, served as Vice-Chancellor of the university from 1901 to 1903

The University of Tasmania[11] was established on 1 January 1890, after the abolition of overseas scholarships freed up funds. It immediately took over the role of the Tasmanian Council for Education.[12] Richard Deodatus Poulett Harris, who had long advocated for the establishment of the university, became its first warden of the senate. The first degrees to graduates admitted ad eundem gradum and diplomas were awarded in June 1890. The university was offered an ornate sandstone building on the Queens Domain in Hobart, previously the High School of Hobart, though it was leased by others until mid-1892. This eventually became known as University House. Three lecturers began teaching 11 students from 22 March 1893, once University House had been renovated. Parliamentarians branding it an unnecessary luxury made the university's early existence precarious. The institution's encouragement of female students fuelled criticism. James Backhouse Walker, a local lawyer and briefly Vice-Chancellor, mounted a courageous defence. By the First World War there were over 100 students, and several Tasmanian graduates were influential in law and politics.

According to Chancellor Sir John Morris, from 1918 until 1939 the institution still 'limped along'. Distinguished staff had already been appointed, such as historian William Jethro Brown, physicists and mathematicians Alexander McAulay and his son Alexander Leicester McAulay, classicist RL Dunbabin, and philosopher and polymath Edmund Morris Miller. Housed in the former Hobart High School, facilities were totally outgrown, but the state government was slow to fund a new campus.

During the Second World War, while the Optical Munitions Annexe assisted the war effort, local graduates, replacing soldier academics, taught a handful of students. New post-war staff, many with overseas experience, pressed for removal to adequate facilities at Sandy Bay on an old rifle range. Chancellor Sir John Morris, also Chief Justice, though a dynamic reformer, antagonised academics by his authoritarianism. Vice-Chancellor Torliev Hytten, an eminent economist, saw contention peak while the move to Sandy Bay was delayed. In a passionate open letter to the premier, Philosophy Professor Sydney Orr goaded the government into establishing the 1955 Royal Commission into the university. The commission's report demanded extensive reform of both university and governing council. Staff were delighted, while lay administrators fumed.

The university's first site at Queens Domain. The university moved to its Sandy Bay campus in the early 1960s

On 10 May 1949, the university awarded its first Doctor of Philosophy to Joan Munro Ford.[15][16] Ford worked as a research biologist in the University of Tasmania's Department of Physics between 1940 and 1950.[17]

In early 1956 Orr was summarily dismissed, mainly for his alleged though denied seduction of a student. A ten-year battle involved academics in Australia and overseas. Orr lost an unfair dismissal action in the Supreme Court of Tasmania and the High Court of Australia. The Tasmanian Chair of Philosophy was boycotted. In 1966 Orr received some financial compensation from the University, which also established a cast-iron tenure system. The latter disappeared with the federal reorganisation of higher education in the late 1980s.

In the early 1960s The University of Tasmania at last transferred to a purpose-built new campus at Sandy Bay, though many departments were initially housed in ex-World War II wooden huts. It profited from increasing federal finance following the 1957 Murray Report. Medical and Agricultural Schools were established and the sciences obtained adequate laboratories. Physics achieved world recognition in astronomy (optical, radio and cosmic rays), while other departments attracted good scholars and graduates were celebrated in many fields. Student facilities improved remarkably.[18]

The 1965 Martin Report established a traditional role for universities, and a more practical role for colleges of advanced education. The Tasmanian Government duly created the Tasmanian College of Advanced Education (TCAE) in 1966 sited on Mount Nelson above the university. It initially incorporated The School of Art, the Conservatorium of Music and the Hobart Teachers College. In 1971, a Launceston campus of the TCAE was announced. These were fateful decisions, as events over the next years showed. It was argued that the TCAE attempted to compete with the university, not complement it.

In 1978 the University of Tasmania took over two of the courses offered by the TCAE in Hobart, Pharmacy and Surveying, following a report by Professor Karmel, and another by H.E. Cosgrove. Some other TCAE courses in Hobart moved to Launceston. The curious situation of three separate courses in teacher education in the State could not last, however, and following two more reports, the university incorporated the remaining courses of the Hobart campus of the College of Advanced Education in 1981, which raised its numbers to 5000. The Launceston campus of the TCAE renamed itself the Tasmanian State Institute of Technology (TSIT).

In 1987, the University Council resolved to approach the TSIT to negotiate a merger to minimise ongoing conflict. The 'Dawkins Revolution' and the 'unified national system' provided later support for this initiative. The Tasmanian State Institute of Technology became the Newnham Campus of the university on 1 January 1991, exactly 101 years after the university's founding. A new campus at Burnie on the North-West Coast of Tasmania was opened in 1995, and later became known as the Cradle Coast Campus.

Damian Bugg became the university's chancellor in 2006, having previously served as a member of the University Council since 2001. Bugg was an alumnus of the university who studied law and resided at John Fisher College where he was president. While chancellor, he also served as Commonwealth Director of Public Prosecutions.[21] That year the university opened two satellite campuses in Sydney, offering nursing and paramedic education in partnership with local hospitals and health services such as St Vincent's Hospital. 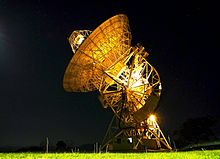 The Greenhill Observatory joined the universities other radio astronomy antennas including the Mount Pleasant Radio Observatory (pictured) in Cambridge, Tasmania

The Australian Maritime College (AMC) merged with the university in 2008. The merger helped streamline degree programs and improved provision of basic services at the combined Newnham campus.[22][23]

The university has three main campuses based in Hobart, Launceston and Burnie. It also has a number of small, specialist facilities within the College of Health and Medicine at its Darlinghurst and Rozelle campuses in Sydney. It also has a joint research facility at the city's Australian National Maritime Museum in Pyrmont. 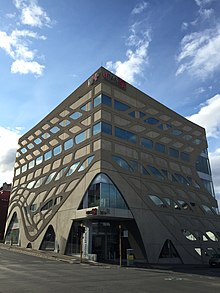 The MS1 Building of the Medical Sciences Precinct 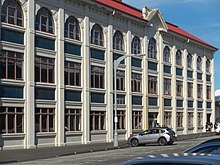 The School of Creative Arts & Media

The Student Centre at the Newnham Campus, Launceston[34]

The University's national and international reputation is reflected by its top-10 standing as a recipient of research funding in Australia, and reaffirms its place in the top 2 per cent of research institutions in the world. The University is ranked 305th according to the Academic Ranking of World Universities in 2015.[52]

The University's research strengths take advantage of these capabilities and Tasmania's unique characteristics, including its natural environment and geographical location. They lie in the thematic areas of Environment, Resources and Sustainability; Creativity, Culture and Society; Health; Marine, Antarctic and Maritime; and Data, Knowledge and Decision-making.[53]

The University of Tasmania has five colleges, previously known as faculties, some divided into schools and institutes:

The University currently holds the secretariat role of the International Antarctic Institute established in 2006 in partnership with 19 institutions in 12 countries.[54] 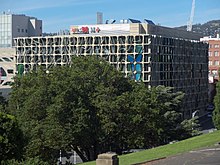 The Grant of Arms was made by the College of Arms. The blazon reads:

Argent a Lion passant Gules armed and langued Azure holding in its dexter paw a Torch enflamed Proper on a Chief Gules a Pale Azure fimbriated Or charged with a representation of the Southern Cross Argent between two closed Books clasped Or.[58]

In 1936 the University Council ran a competition to produce a draft set of Arms to replace the common seal it had used since 1901, based on the badge of the Tasmanian Council of Education with the motto Floreat Tasmania (May Tasmania Prosper). The winning design included four key elements of the current Arms of the university including a lion (representing Tasmania), a book (representing the academic side of the University), a Southern Cross (representing Australia) and a touch (representing the athletic side of the University), over a crown (Or) (signifying the royal charter held by the University). The official coat of arms was granted by the College of Heralds in 1978. The core elements of the 1936 design were kept with slight adjustments made to comply with heraldic rules.[59]

Until 2008, there were two separate student unions: the Tasmania University Union (TUU) in Hobart and the Student Association (SA) in Launceston. Following the abolition of compulsory student unionism in 2007, the SA and the TUU amalgamated into one statewide organisation representing all UTAS students.[60]

The TUU is responsible for the overseeing of all the university's many sports clubs and societies. Some of these include faculty-based societies providing academic and careers guidance; societies relating to various interests, such as the Old Nick Company; and various sporting clubs, including cricket, football, rugby union and soccer.

The TUU also publishes the independent student media at the University of Tasmania, Togatus.[61]

The University's Melville Street accommodation in the Hobart CBD 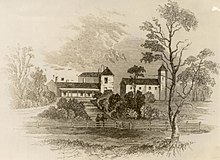 The original Christ College Building in 1856

The university maintains a strong residential college system, as well as providing more independent apartment-style living. A key aspect of campus life, the residential colleges are equipped with modern facilities and host several events during the semesters. The colleges also maintain their respective student clubs, key in the passing of traditions from one cohort to the next. The southern colleges annually compete in a series of sporting events including Rugby, Australian Football, Cricket, Softball, Basketball, Table Tennis, Tennis and Soccer.

Two other residential colleges once existed in Hobart – the non-denominational Hytten Hall (1959–1980) located on the Sandy Bay campus, and now used as a building for the Faculty of Education, and Ena Waite Women's College (1968–1980), operated by the Catholic Church and located in central Hobart, which amalgamated with St. John Fisher College. An off-campus student residence in Launceston, Clarence House, operated from 2004 to 2008.

The Tasmania Scholarships program supports the university's commitment to offer students equal learning opportunity. It assists talented students, both locally, nationally and internationally. Industry contributions now make up the backbone of the Tasmania Scholarships program. The development and growth of this initiative into one of the most successful sponsored programs in the country is exceptional by any standard. Around 10 per cent of all domestic students at UTAS receive some sort of scholarship or financial assistance. Scholarships are also offered under the banner of the Jim Bacon Memorial Scholarship, funded by the Tasmanian Government.

The University of Tasmania has produced many notable alumni, with graduates having held the offices of Governor of Tasmania, Justices of the High, Supreme, Federal courts, Premiers of Tasmania and elected leaders of other states and territories, Rhodes Scholars, the first female professor in Australia, ministers of foreign countries, Lord Mayors, academics, architects, historians, poets, philosophers, politicians, scientists, physicists, authors, industry leaders, defence force personnel, corporate leaders, community leaders, and artists. There are over 100,000 graduates of the University of Tasmania, spanning 104 countries.[62]