The university offers bachelor's degrees, master's degrees, and doctoral degrees in 80 undergraduate and 49 graduate areas of study through eight academic colleges. These colleges include Arts and Sciences, Business, Education and Professional Studies, Engineering, Health Sciences, Environment and Life Sciences, Nursing, and Pharmacy. Another college, University College for Academic Success, serves primarily as an advising college for all incoming undergraduates and follows them through their first two years of enrollment at URI. It is classified among "R2: Doctoral Universities – High research activity".[3]

The university was first chartered as the state's agricultural school and agricultural experiment station in 1888. The site of the school was originally the Oliver Watson Farm, whose original farmhouse is now a small museum. In 1892, the school became known as the Rhode Island College of Agriculture and Mechanic Arts.[5] The first class had only seventeen students, each completing their course of study in two years. In 1909, the school's name was again changed to Rhode Island State College as the school's programs were expanded beyond its original agricultural education mandate. In 1951 the school was given its current title through an act of the General Assembly following the addition of the College of Arts and Sciences and the offering of doctoral degrees. The Board of Governors for Higher Education, appointed by the governor, became the governing body of the University in 1981 during the presidency of Frank Newman (1974–1983). The Board of Governors was replaced by the Rhode Island Board of Education in 2013,[6], and by a 17-member Board of Trustees in 2019. The current president is David M. Dooley.[7]

A list of Presidents of the University of Rhode Island:

In 2013 the faculty adopted an open-access policy to make its scholarship publicly accessible online.[8]

URI's main campus is located in northern South Kingstown, and is accessed via Rhode Island Route 138 from either the west (Interstate 95) or east (United States Route 1). The campus was mostly farmland when it was purchased by the state in 1888, and still includes the c. 1796 Oliver Watson Farmhouse. The early buildings of the campus are set around its main quadrangle, and were built out of locally quarried granite. The campus master plan was developed by the noted landscape architects Olmsted, Olmsted & Eliot in the 1890s. The central portion of the campus, where most of its pre-1950 buildings are located,[9] was listed on the National Register of Historic Places in 2017.

URI has 17 club sports teams consisting of around 600 athletes. Club sports the school offers include tennis, equestrian, ultimate frisbee, volleyball, field hockey, wrestling, crew, gymnastics, lacrosse and sailing, amongst others. These teams travel and compete against other intercollegiate programs in the country. URI also has 20+ intramural sports, including volleyball, badminton, dodgeball, and soccer. The intramural sports allow students to compete in tournaments and games with other students on campus.[21]

The University of Rhode Island competes in 16 intercollegiate sports.[23] The university is a member of the Atlantic 10 Conference and the Colonial Athletic Association in the NCAA Division I Football Championship Subdivision. The URI men's basketball team competes in the Atlantic 10 Conference, and has appeared in the NCAA "March Madness” Tournament a total of 10 times since its first appearance in 1961. Two of these ten appearances occurred during the 2017 and 2018 seasons.[24][25]

Quadrangle on an early September evening at University of Rhode Island.

While 5600 students live in the 25 on campus residence halls, thousands more opt to commute from the surrounding area.[26] Narragansett, an abutting town to Kingston, is made up of hundreds of summer vacation homes which are rented to students for the academic year. 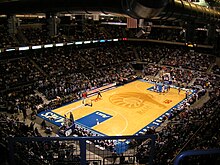 Listen to this article

This audio file was created from a revision of this article dated 2005-12-11, and does not reflect subsequent edits.
()