Advertisement - You can get this game from STEAM
American publishing house 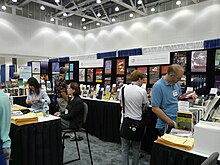 As the non-profit publishing arm of the University of California system, the UC Press is fully subsidized by the University and the State of California.[3] A third of its authors are faculty members of the University. The Press publishes over 250 new books and almost four dozen multi-issue journals annually, in the humanities, social sciences, and natural sciences, and maintains approximately 4,000 book titles in print.[4] It is also the digital publisher of Collabra and Luminos open access (OA) initiatives.

The Press has its administrative office in downtown Oakland, California, an editorial branch office in Los Angeles, and a sales office in New York, and distributes through marketing offices in Great Britain, Asia, Australia, and Latin America. A Board consisting of senior officers of the University of California, headquartered in Berkeley, holds responsibility for the operations of the Press, and authorizes and approves all manuscripts for publication. The Editorial Committee consists of distinguished faculty members representing the University's nine campuses.[3]

The Press commissioned as its corporate typeface University of California Old Style from type designer Frederic Goudy from 1936 to 1938, although it no longer always uses the design.[5][6][7][8]

Luminos is University of California Press’s open access response to the challenged monograph landscape. With the same high standards for selection, peer review, production, and marketing as its traditional book publishing program, Luminos is a transformative model, built as a partnership where costs and benefits are shared.[10]

The University of California Press re-printed a number of novels under the California Fiction series from 1996 to 2001. These titles were selected for their literary merit and for their illumination of California history and culture.[11][12]