As of 2019, the University of Antwerp ranks as 198th globally according to Times Higher Education,[2] 223rd according to QS World University Rankings[3] and between the 201 and 300th place according to the Academic Ranking of World Universities.[4] The university ranked 22nd in the Times Higher Education Ranking for Young Universities (2019)[5] and 18th in the QS University Ranking Top 50 Under 50 (2020).[6] In ten domains the university's research is among the best in the world: Drug Discovery and Development; Ecology and Sustainable Development; Harbour, Transport and Logistics; Imaging; Infectious Diseases; Materials Characterisation; Neurosciences; Socio-economic Policy and Organisation; Public Policy and Political Science; Urban History and Contemporary Urban Policy.[7]

The university's roots go back to Sint-Ignatius Handelshogeschool (Saint-Ignatius School for Higher Education in Commerce) founded by the Jesuit (Society of Jesus) in Antwerp in 1852. This was one of the first European business schools to offer formal university degrees. It later opened a Faculty of Literature and Philosophy (including Law) and a Faculty of Political and Social Sciences. It was renamed Universitaire Faculteiten Sint-Ignatius Antwerpen (UFSIA) in the 1960s when the Belgian government granted it university status. In the early 1970s UFSIA joined into a confederation with "Rijksuniversitair Centrum Antwerpen" (RUCA) and "Universitaire Instelling Antwerpen" (UIA), public institutions.[8]

In 2003 UFSIA, RUCA, and UIA merged into the University of Antwerp to become the first explicitly pluralistic university in Belgium, offering philosophical, ethical, and spiritual discourse and openness towards religion and intercultural dialogue. It soon became the third largest university in Flanders with 20,000 students. In order to face the challenges posed by the internationalization of European education and research, the University is part of the Antwerp University Association (AUHA). The Catholic influence that the Jesuits had at UFSIA continues through the Saint Ignatius University Centre (UCSIA), Antwerp, founded in 2003. 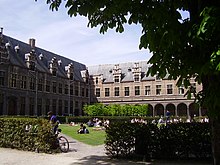 The large quad of the Stadscampus

The nine campuses are located all over the city of Antwerp, from the historic city centre to the green belt to the south of the city.

The University of Antwerp has a long tradition in organizing international student championships. The following FISU, EUSA and IFIUS events have been organized: