UQAM was founded on April 9, 1969 by the government of Quebec, through the merger of the École des beaux-arts de Montréal, a fine arts school; the Collège Sainte-Marie, a classical college; and a number of smaller schools. Although part of the UQ network, UQAM possesses a relative independence which allows it to print its own diplomas and choose its rector.

In the fall of 2018, the university welcomed some 40,738 students,[3] including 3,859 international students from 95 countries, in a total of 310 distinct programs of study,[4] managed by six faculties (Arts, Education, Communication, Political Science and Law, Science and Social science) and one school (Management). It offers Bachelors, Masters, and Doctoral degrees. It is one of Montreal's two French-language universities, along with the Université de Montréal, and only 1% of its student population is of English-speaking origin.[citation needed]

UQAM was created on April 9, 1969 by the Government of Quebec, following the merger of the École des beaux-arts de Montréal, the collège Sainte-Marie and three colleges.

In mid 1970, construction on UQAM's campus began in the Saint-Jacques neighbourhood. The old St. Jacques Cathedral was condemned and the worshipers were moved to the Chapel of Notre-Dame-de-Lourdes. The architect of the university, Dimitri Dimakopoulos, chose to respect the plans of John Ostell and Victor Bourgeau by deciding to graft the new construction around the wall of the nave of the church overlooking Saint Catherine Street and highlighting the bell tower and its gateway. These remains are classified as historic monuments by the Quebec government. The new campus of UQAM was inaugurated in September 1979.

Before the arrival of the Université du Québec à Montréal, access to higher education was limited for the French-speaking working classes. Thanks to the policy of admitting adults with relevant professional experience, the student population was able to broaden the student population to include social categories previously excluded from higher education, thus creating a climate of openness.[5]

UQAM is the first Canadian university where faculty unionism is developing. The Université du Québec professors' union, which has been affiliated since its birth in 1970 with the Confédération des syndicats nationaux (CSN), has participated in the effort to democratize the functioning of university authorities.[6]

In November 2006, UQAM underwent a major financial crisis. It was revealed that the former president, Roch Denis, was partially responsible for the financial mismanagement of the Science Complex and the Ilot Voyageur real estate projects.[7] A recovery plan, required by the Ministry of Education, Sport and Leisure, is still in progress, raising significant challenges from groups of employees, students, lecturers and professors.

With the addition of the Télé-université in June 2005, UQAM, with a student population of close to 60,000, was the largest French-speaking university in the world.[8] On 13 January 2012, it was announced that the TELUQ would again become a separate university from UQAM, but would remain in the Université du Québec system.[9] 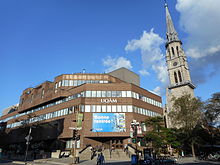 UQAM's campus was designed by Dimitri Dimakopoulos and is located in downtown Montreal, with most of its buildings in the Quartier Latin neighbourhood near the Berri-UQAM Metro station and the newer Complexe des sciences Pierre-Dansereau near Place des Arts. The University is also involved in the troubled Îlot Voyageur project, a 13-storey student residence and intercity bus terminal, but has had to scale back its involvement due to financial problems.[10] In September 2013, the university announced that it had acquired the National Film Board of Canada's former CineRobotheque facility for its communications faculty.[11]

The University provides training on its campus in Montreal and its four regional centers: UQAM Lanaudière in Terrebonne, UQAM Laval, UQAM Montérégie in Longueil and UQAM Ouest-de-l'île.[12]

A three part virtual exhibition was made to showcase the university's history.[13]

Interior of the Judith Jasmin building

The University is represented in Canadian Interuniversity Sport by the UQAM Citadins.

UQAM is part of the Université du Québec network, which has a distance learning component called Télé-université (Teluq). It offers courses and degrees in computer science, education, communication, environmental science, and management. University of Québec has improved geographical accessibility through multiple campuses spread throughout the province and by offering distance education by Télé-Université.[14]

A commissioned report by PricewaterhouseCoopers has called for cost-cutting measures at UQAM to help the university out of a financial crisis, brought on by $100 million in construction cost overruns for its sciences centre and costs for Îlot Voyageur, which soared from $226 million to more than $400 million when the Quebec government pulled out of the project, citing unauthorized design changes. The Quebec government has said that unless UQÀM cuts costs, the university's total project-related debt could be $500 million by 2012.[10] The Îlot Voyageur has been bought back by the government of Quebec in November 2010, thus solving a painful financial problem for UQAM.[25]