The Universidad Nacional de Asunción or Mbo'ehaovusu Tetãgua Paraguaygua, abbreviated UNA, anglicized as, The National University of Asuncion, is a public university in Paraguay. Founded in 1889, it is the oldest and most traditional university in the country.[1]

When the university first started, it consisted of only the Faculties of Law, Medicine and Mathematics, and schools of Clerical, Pharmacy and Obstetrics.

As of 2015, the UNA had 12 faculties and a number of institutes in 74 careers that take place in different areas of knowledge, offering students the most comprehensive range of vocational training opportunities. The academic community is made up of about 40,000 students and 6,200 teachers.

It also has several technology centers and research facilities for the academic community, both for conducting scientific research, and for the development of postgraduate studies, resulting in contributions to society. 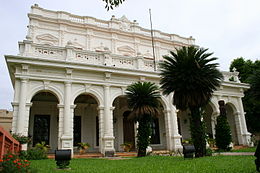