The UANL has seven distinct campuses: the Main Campus, which houses the Administration Building, Colleges of Law, Biological Sciences, Chemistry, Public Accounting and Philosophy, amongst others, as well as the Football Stadium, and other sport facilities. Other campuses include the Health Sciences Campus, the Mederos Humanities and Fine Arts campus, the Marin Agronomy Center, the Escobedo Agricultural Sciences Campus, the Linares Earth Sciences, and Forestry campus,as well as the Sabinas Hidalgo facilities, where extensions of the Colleges of Law, and Business are housed.[6]

The institution counts with 84 Libraries with a total of 2,238,000 Library volumes. It has 27 research facilities with 438 national researchers, 16 academic journals, 9 main campus bookstores, 25 student computer centers and 53 cafeterias.[6] 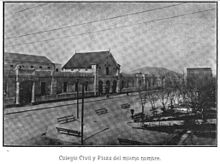 The Civil Academy, one of the five institutions that joined efforts to create the University of Nuevo León in 1933.

The immediate forerunner of this public university dates back to 1859, when the Civil Academy (Colegio Civil) started its courses. This institution had been envisioned by Governor Santiago Vidaurri but was erected by his successor, José Silvestre Aramberri, after the former was removed from office. The academy began to sponsor the Pharmacy and Medicine courses José Eleuterio González had been teaching at the local Hospital of the Rosary for several decades. The academic offerings included courses in Law and Medicine, as well as a preparatory school. Its first director was José de Jesús Dávila y Prieto.

On 29 October 1932, the delegations of the state schools of Law, Medicine and Pharmacy; the Civil Academy and the normal school, submitted a project to the Congress of Nuevo León to organize a state university for the Monterrey Metropolitan area. On 7 November 1932, the state congress ordered to proceed with the request and on 25 September 1933 the University of Nuevo León was born.[9] Héctor González González was elected as the first rector of the university.[10]

In its first year, 1,864 students were schooled by 218 professors from the faculties of Medicine, Law, Engineering, and Chemistry, the Normal School, a preparatory school, the School of Nurses and Obstetricians and the Álvaro Obregón and Pablo Livas Industrial Schools. The institution became plagued with political disputes and almost two years later, on 25 September 1935, it was closed by state decree, only to reopen almost eight years later, on 13 September 1943.[9]

The number of faculty and personnel began to grow and this prompted the construction of its own campus in 1958, the University City (Ciudad Universitaria), an academic complex located in San Nicolás de los Garza, a suburb to the state capital. In 1967, its open-air stadium was finished. From 1968 to 1972, the University was hit once again by student protests and political disputes, and by 1971 the protests had forced the government to stop from interfering in its internal affairs and recognize a statute of autonomy that became part of its current name: Autonomous University of Nuevo León (Universidad Autónoma de Nuevo León).[11]

In the late 1990s the institution saw the necessity to rent its professional football (soccer) team, which has maintained in the Mexican professional league (Tigres de la UANL),[12] and was later affected by a corruption scandal that involved its own rector but ended with no legal consequences for those accused.[13]

The university has seven campuses across the state:

The university also runs 36 high schools of which 7 are Technical High Schools, one is a Bilingual International High School, and the rest are 2-year high schools.[15] 25 other schools around the state that are not property of the UANL are incorporated to the university, which means that these schools meet the norms established by the institution (a minimum infrastructure of libraries, laboratories, class rooms, school programs accepted by the UANL, and certified academic staff).[16]

Center for Research and Development in Health Sciences

The current rector is Rogelio Garza Rivera, The university also has a symphony orchestra, a chamber orchestra, and a band of regional music, El Tigre.

The UANL's teams are called the "Tigres".

The American football team, named the Auténticos Tigres, is very successful in the ONEFA. The program has won five national championships (1974, 1977, 2009, 2011, and 2012), and four times has been runner-up. They play in the Estadio Gaspar Mass.

The UANL installations include the Raymundo "Chico" Rivera Stadium (a football and athletic field), the Luis Eugenio Todd Gym, a baseball park, an indoor soccer pitch, and a tennis center with four courts[18]

The soccer team Tigres de la UANL was managed by the UANL until 1996, when the team's control passed to Cemex through a 30 years agreement, but the team has always belonged to the UANL. The Estadio Universitario is located in the principal campus of the UANL, and occasionally is host of Auténticos Tigres games, and others activities of the university.

The University Olympic Aquatic Center Centro Acuático Olímpico Universitario is one of the best aquatic centers of the country. It's also located in the main campus and there are swimming, water polo, diving and synchronized swimming teams. 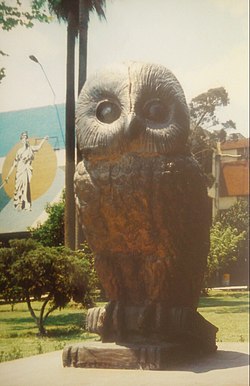