Units of measurement in France before the French Revolution 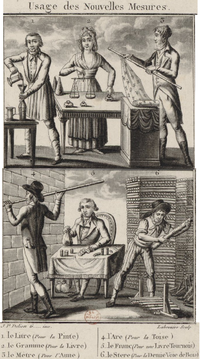 Before the French Revolution, which started in 1789, French units of measurement were based on the Carolingian system, introduced by the first Holy Roman Emperor Charlemagne (AD 800–814) which in turn were based on ancient Roman measures. Charlemagne brought a consistent system of measures across the entire empire. However, after his death, the empire fragmented and many rulers introduced their own variants of the units of measure.

Some of Charlemagne's units of measure, such as the pied du Roi (the king's foot) remained virtually unchanged for about a thousand years, while others, such as the aune (ell—used to measure cloth) and the livre (pound) varied dramatically from locality to locality. By the time of the revolution, the number of units of measure had grown to the extent that it was almost impossible to keep track of them. 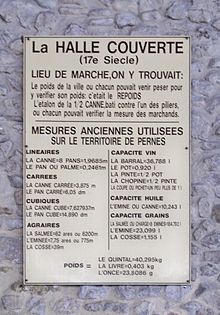 Although in the pre-revolutionary era (before 1795) France used a system and units of measure that had many of the characteristics of contemporary English units (or the later Imperial System of units), France still lacked a unified, countrywide system of measurement. Whereas in England the Magna Carta decreed that "there shall be one unit of measure throughout the realm", Charlemagne and successive kings had tried but failed to impose a unified system of measurement in France.[1]

The names and relationships of many units of measure were adopted from Roman units of measure and much more were added – it has been estimated that there were seven or eight hundred different names for the various units of measure. Moreover, the quantity associated with each unit of measure differed from town to town and even from trade to trade to the extent that the lieue (league) could vary from 3.268 km in Beauce to 5.849 km in Provence. It has been estimated that on the eve of the Revolution a quarter of a million different units of measure were in use in France.[2] Although certain standards, such as the pied du Roi (the King's foot) had a degree of pre-eminence and were used by savants, many traders chose to use their own measuring devices giving scope for fraud and hindering commerce and industry.[1]

Tables of units of measure 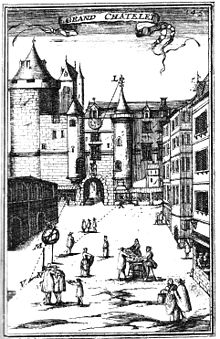 17th-century engraving of the Grand Châtelet 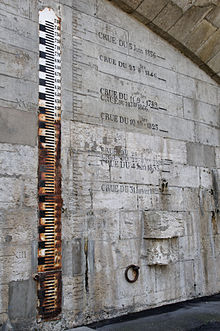 The mediaeval royal units of length were based on the toise and in particular the toise de l'Écritoire, the distance between the fingertips of the outstretched arms of a man which was introduced in 790 AD by Charlemagne.[4] The toise had 6 pieds (feet) each of 326.6 mm (12.86 in). In 1668 the reference standard was found to have been deformed and it was replaced by the toise du Châtelet which, to accommodate the deformation of the earlier standard, was 11 mm (0.55%) shorter.[5] In 1747 this toise was replaced by a new toise of near-identical length – the Toise du Pérou, custody of which was given to l'Académie des Sciences au Louvre.[6]

Although the pouce (inch), pied (foot) and toise (fathom) were fairly consistent throughout most of pre-revolutionary France, some areas had local variants of the toise. Other units of measure such as the aune (ell), the perche (perch or rood), the arpent and the lieue (league) had a number of variations, particularly the aune (which was used to measure cloth).[7]

In Quebec, the surveys in French units were converted using the relationship 1 pied (of the French variety, the same word being used for English feet as well) = 12.789 English inches.[10] This makes the Quebec pied very slightly smaller (about 4 parts in one million) than the pied used in France.

King Jean II constructed a new standard of measures, including a livre actuelle ("current" pound, also known as a livre de poids de marc or "mark weight" pound) of 2 marcs, i.e. 16 onces.[15] The Charlemagne 12-ounce livre became known as the livre esterlin ("true" pound) in order to distinguish it.[16][17] "esterlin" was a Middle French word that did not survive into Modern French.[17]

The livre actuelle could be sub-divided into 2 demi-livres (half-pounds), 4 quarterons, or 8 demi-quarterons.[18] Conversely, there were 100 livres in a quintal (c.f. English hundredweight).[18] The fractional parts of an once had different names in Apothecary measure (used in medicine) and measure of precious metals, but the fractional ratios were themselves the same: 1 once was 8 drachme (Apothecary, c.f. English dram) or gros; 1 drachme/gros was 3 scruples (Apothecary, c.f. English scruple) or deniers, and 1 scruple/denier was 24 grains.[19][20] This makes 384 deniers in a livre in weight measure, which contrasts with the old monetary livre in France which was divided into 240 deniers.[21]

Jean II's standards are preserved in the Conservatoire Nationale des Arts et Métiers, which also holds a set of later-still physical standards from the 15th century, the so-called pile de Charlemagne.[20][22] This pile defined the weight of 50 marcs, i.e. 400 onces, and thus 25 livres actuelles, or 33​1⁄3 livres esterlins.[14][23] It had been kept in the royal palaces originally.[24] In 1540 King François I had transferred it to the Cour des monnaies, where it had been held in a cabinet with three locks, whose keys had been held separately by the president of the Cour, one of its counsellors, and a clerk.[24]

The thirteen individual pieces that made up the Parisian pile de Charlemagne comprised an outer containing cylinder nominally weighing 20 marcs, and a set of hollow nesting cups within, topped with a filled weight as the smallest piece.[23][25][26] The heaviest cups were nominally 14, 8, 4, and 2 marcs, sub-totalling 48 marcs; followed by a nominally 1 marc hollow cup which was termed the marc creux (hollow mark); and followed by 6 further cups (4, 2, and 1 onces, and 4, 2, and 1 gros) with a final seventh filled 1 gros weight, all totalling 1 marc, which was termed the marc plein (filled mark).[23][25][27][26]

However, the actual masses of the pre-metric measures were nowhere near even this simple.[30] These were just the Parisian standards, and individual provinces, cities, and even guilds, all had their own reference physical standards, which were not checked against one another and which sometimes conflated esterlin and actuelle.[30] For just some examples: the Marseille livre was 399.6 g, the Montpelier one 394.9 g, the Toulon one 465.5 g, and the Toulouse one 413.2 g; with all of the fractional subdivisions having different values accordingly.[31] The Limoges marc was 240.929 g, the Tours one 237.869 g, and the Troyes one 250.050 g.[32]

Furthermore, there were also livres comprising different numbers of onces to both the actuelle and esterlin, including livres of 14, 18, and 20 onces, confusing things yet further.[33] The livre in the poids de table (table weight) systems used in Provence and Languedoc (and a common name for provincial weight systems in general alongside poids de pays, country weight, and poids de ville, town weight) was the same weight as 15 onces or even as low as 13 onces in the Parisian poids de marc,[34][35][36][12] and the livre in the poids de soie (silk weight) system of Lyon was similarly just ​15⁄16 the weight of the Parisian livre.[37][12] This caused an erroneous belief that these livres comprised 13, 14, or 15 onces, however this was a confusion stemming from the equivalent poids de marc weights, and both poids de table and poids de soie had 16 of their own, lighter, onces and so forth,[37][35][12] Rouen had a poids de vicomté system.[12]