The United States Senate Committee on Foreign Relations is a standing committee of the United States Senate. It is charged with leading foreign-policy legislation and debate in the Senate. The Foreign Relations Committee is generally responsible for overseeing (but not administering) and funding foreign aid programs as well as funding arms sales and training for national allies. The committee is also responsible for holding confirmation hearings for high-level positions in the Department of State. The committee has considered, debated, and reported important treaties and legislation, ranging from the Alaska purchase in 1867 to the establishment of the United Nations in 1945. It also holds jurisdiction over all diplomatic nominations.[1] Along with the Finance and Judiciary committees, the Foreign Relations Committee is one of the oldest in the Senate, going back to the initial creation of committees in 1816. Its sister committee in the House of Representatives is the Committee on Foreign Affairs (renamed from International Relations by the 110th Congress in January 2007).

Between 1887–1907, Alabama Democrat John Tyler Morgan played a leading role on the committee. Morgan called for a canal linking the Atlantic and Pacific oceans through Nicaragua, enlarging the merchant marine and the Navy, and acquiring Hawaii, Puerto Rico, the Philippines and Cuba. He expected Latin American and Asian markets would become a new export market for Alabama's cotton, coal, iron, and timber. The canal would make trade with the Pacific much more feasible, and an enlarged military would protect that new trade. By 1905, most of his dreams had become reality, with the canal passing through Panama instead of Nicaragua.[2]

During World War II, the committee took the lead in rejecting traditional isolationism and designing a new internationalist foreign policy based on the assumption that the United Nations would be a much more effective force than the old discredited League of Nations. Of special concern was the insistence that Congress play a central role in postwar foreign policy, as opposed to its ignorance of the main decisions made during the war.[3] Republican senator Arthur Vandenberg played the central role. In 1943, a confidential analysis of the Senate Foreign Relations Committee was made by British scholar Isaiah Berlin for the Foreign Office.[4][5]

Committee chairman Senator J. William Fulbright (left) with Senator Wayne Morse during a hearing on the Vietnam War in 1966

In 1966, as tensions over the Vietnam War escalated, the committee set up hearings on possible relations with Communist China. Witnesses, especially academic specialists on East Asia, suggested to the American public that it was time to adopt a new policy of containment without isolation. The hearings Indicated that American public opinion toward China had moved away from hostility and toward cooperation. The hearings had a long-term impact when Richard Nixon became president, discarded containment, and began a policy of détente with China.[6] The problem remained of how to deal simultaneously with the Chinese government on Taiwan after formal recognition was accorded to the Beijing government. The committee drafted the Taiwan Relations Act (US, 1979) which enabled the United States both to maintain friendly relations with Taiwan and to develop fresh relations with China.[7]

In response to conservative criticism that the state department lacked hardliners, President Ronald Reagan in 1981 nominated Ernest W. Lefever as Assistant Secretary of State. Lefever performed poorly at his confirmation hearings and the Senate Committee on Foreign Relations rejected his nomination by vote of 4-13, prompting Lefever to withdraw his name.[8] Elliot Abrams filled the position.

Republican senator Jesse Helms, a staunch conservative, was committee chairman in the late 1990s. He pushed for reform of the UN by blocking payment of U.S. membership dues.[9]

Chris Murphy and another official from the US Senate Foreign Relations Committee inspecting burnt down printing press of Uthayan newspaper in Jaffna on December 7, 2013 while E. Saravanapavan, the Managing Director of the newspaper explaining something to him. 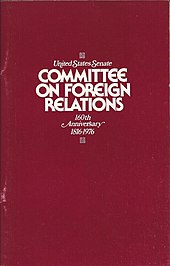