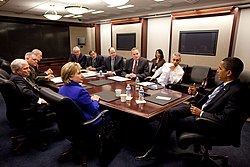 The National Security Council was created in 1947 by the National Security Act. It was created because policymakers felt that the diplomacy of the State Department was no longer adequate to contain the Soviet Union, in light of the tension between the Soviet Union and the United States.[1] The intent was to ensure coordination and concurrence among the Army, Marine Corps, Navy, Air Force and other instruments of national security policy such as the Central Intelligence Agency (CIA), also created in the National Security Act. In 2004, the position of Director of National Intelligence (DNI) was created, taking over the responsibilities previously held by the head of CIA, the Director of Central Intelligence, as a cabinet-level position to oversee and coordinate activities of the Intelligence Community.[2]

On January 29, 2017, President Donald Trump restructured the Principals Committee (a subset of the full National Security Council), while at the same time altering the attendance of the Chairman of the Joint Chiefs of Staff and Director of National Intelligence.[5]

According to National Security Presidential Memorandum 2, the Chairman of the Joint Chiefs of Staff and Director of National Intelligence were to sit on the Principals Committee as and when matters pertaining to them arise, but will remain part of the full National Security Council.[6][7] However, Chief of Staff Reince Priebus clarified the next day that they still are invited to attend meetings.[8] With National Security Presidential Memorandum 4 in April 2017, the Director of National Intelligence and the Chairman of the Joint Chiefs of Staff "shall" attend Principals Committee meetings and included the Director of the Central Intelligence Agency as a regular attendee.[9] The reorganization also placed the Administrator of the United States Agency for International Development as a permanent member of the Deputies Committee, winning moderate praise,[10] while the White House Chief Strategist was removed.[11][12]

For a detailed history of the United States National Security Council by year see:

A secret National Security Council panel pursues the killing of an individual, including American citizens, who has been called a suspected terrorist.[14] In this case, no public record of this decision or any operation to kill the suspect will be made available.[14] The panel's actions are justified by "two principal legal theories": They "were permitted by Congress when it authorized the use of military forces against militants in the wake of the attacks of September 11, 2001; and they are permitted under international law if a country is defending itself."[14]

Homeland Security Advisor John O. Brennan, who has helped codify targeted killing criteria by creating the Disposition Matrix database, has described the Obama Administration targeted killing policy by stating that "in order to ensure that our counterterrorism operations involving the use of lethal force are legal, ethical, and wise, President Obama has demanded that we hold ourselves to the highest possible standards and processes".[15]

Reuters has reported that Anwar al-Awlaki, an American citizen, was on such a kill list and was killed accordingly.[14]

On February 4, 2013, NBC published a leaked Department of Justice memo providing a summary of the rationale used to justify targeted killing of US citizens who are senior operational leaders of Al-Qa'ida or associated forces.[16]

The Directorate of Global Health Security and Biodefense, created by Barack Obama in 2016 in response to the 2014 Ebola outbreak, was responsible "to prepare for the next disease outbreak and prevent it from becoming an epidemic or pandemic."[24][25] The directorate was disbanded when a May 2018 change in organizational structure by John Bolton, Trump's recently appointed head of the National Security Council, resulted in the effective elimination of the office then led by Rear Admiral Tim Ziemer, Sr. Director for Global Health Security and Biothreats. Remaining staff were moved to other NSC departments, prompting Ziemer's resignation, thus completing the elimination of the office.[26][27][25]

The responsibilities that formerly belonged to the directorate, along with those of arms control and nonproliferation, and of weapons of mass destruction terrorism, were absorbed into a single new directorate, counterproliferation and biodefense, and assigned to Tim Morrison in July 2018 as director. Morrison characterized the consolidation as part of an overall NSC "reduction of force" and called it "specious" to say the office was "dissolved," describing the previous size of the organization as "bloat," and stating "That is why Trump began streamlining the NSC staff in 2017."[28][29] Trump defended the 2018 cuts, describing the financial motivation, when questioned in a Feb 2020 press conference, suggesting that people on a pandemic response team are unnecessary between pandemics, saying "Some of the people we cut, they haven't been used for many, many years." No source of information could be found to support the president's statement, likely because the team was created in 2016 and disbanded in 2018. He continued: "And rather than spending the money — and I'm a business person — I don't like having thousands of people around when you don't need them."[30] The size of the team before cuts was estimated at 430 people, but the "thousands" referenced by the president also included reduction in the staff numbers of the CDC.[29]