In the United States, the Department of Commerce is an executive department of the federal government concerned with promoting economic growth. Among its tasks are gathering economic and demographic data for business and government decision-making, and helping to set industrial standards. This organization's main purpose is to create jobs, promote economic growth, encourage sustainable development and block harmful trade practices of other nations.[3] The Department of Commerce headquarters is the Herbert C. Hoover Building in Washington, DC. Wilbur Ross is the current Commerce secretary.

The United States Patent and Trademark Office was transferred from the Interior Department into Commerce, and the Federal Employment Stabilization Office existed within the department from 1931 to 1939. In 1940, the Weather Bureau (now the National Weather Service) was transferred from the Agriculture Department, and the Civil Aeronautics Authority was merged into the department. In 1949, the Public Roads Administration was added to the department due to the dissolution of the Federal Works Agency.[4]

In 1958, the independent Federal Aviation Agency was created and the Civil Aeronautics Authority was abolished. The United States Travel Service was established by the United States Secretary of Commerce on July 1, 1961, pursuant to the International Travel Act of 1961 (75 Stat. 129; 22 U.S.C. 2121 note)[5] The Economic Development Administration was created in 1965. In 1966, the Bureau of Public Roads was transferred to the newly created Department of Transportation. The Minority Business Development Agency (MBDA) was created on March 5, 1969, originally established by President Richard M. Nixon as the Office of Minority Business Enterprise. The National Oceanic and Atmospheric Administration (NOAA) was created on October 3, 1970.[4]

Herbert Hoover as secretary of commerce 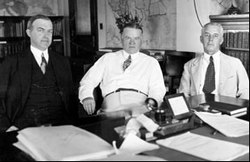 Herbert Hoover, 1921–28 was by far the most active secretary in the history of the department.[6]

Hoover envisioned the Commerce Department as the hub of the nation's growth and stability.[8] His experience mobilizing the war-time economy convinced him that the federal government could promote efficiency by eliminating waste, increasing production, encouraging the adoption of data-based practices, investing in infrastructure, and conserving natural resources. Contemporaries described Hoover's approach as a "third alternative" between "unrestrained capitalism" and socialism, which was becoming increasingly popular in Europe.[9] Hoover sought to foster a balance among labor, capital, and the government, and for this he has been variously labeled a "corporatist" or an associationalist.[10]

Hoover demanded, and received, authority to coordinate economic affairs throughout the government. He created many sub-departments and committees, overseeing and regulating everything from manufacturing statistics to air travel. In some instances he "seized" control of responsibilities from other Cabinet departments when he deemed that they were not carrying out their responsibilities well; some began referring to him as the "Secretary of Commerce and Under-Secretary of all other departments."[8] In response to the Depression of 1920–21, he convinced Harding to assemble a presidential commission on unemployment, which encouraged local governments to engage in countercyclical infrastructure spending. He endorsed much of Mellon's tax reduction program, but favored a more progressive tax system and opposed the treasury secretary's efforts to eliminate the estate tax.[11] 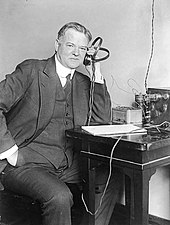 When Hoover joined the department, almost no families had radios; when he became president in 1929, 10 million owned one, and most of the rest listened in a nearby home, store or restaurant. Hoover's department set the policies that shape the entire new industry. Hoover's radio conferences played a key role in the organization, development, and regulation of radio broadcasting. Hoover also helped pass the Radio Act of 1927, which allowed the government to intervene and abolish radio stations that were deemed "non-useful" to the public. Hoover's attempts at regulating radio were not supported by all congressmen, and he received much opposition from the Senate and from radio station owners. [12][13][14]

Hoover was also influential in the early development of air travel, and he sought to create a thriving private industry boosted by indirect government subsidies. He encouraged the development of emergency landing fields, required all runways to be equipped with lights and radio beams, and encouraged farmers to make use of planes for crop dusting.[15] He also established the federal government's power to inspect planes and license pilots, setting a precedent for the later Federal Aviation Administration.[16]

As Commerce Secretary, Hoover hosted national conferences on street traffic collectively known as the National Conference on Street and Highway Safety. Hoover's chief objective was to address the growing casualty toll of traffic accidents, but the scope of the conferences grew and soon embraced motor vehicle standards, rules of the road, and urban traffic control. He left the invited interest groups to negotiate agreements among themselves, which were then presented for adoption by states and localities. Because automotive trade associations were the best organized, many of the positions taken by the conferences reflected their interests. The conferences issued a model Uniform Vehicle Code for adoption by the states, and a Model Municipal Traffic Ordinance for adoption by cities. Both were widely influential, promoting greater uniformity between jurisdictions and tending to promote the automobile's priority in city streets.[17] 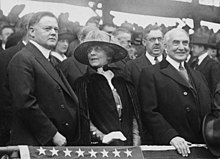 Hoover (left) with President Harding at a baseball game, 1921

With the goal of encouraging wise business investments, Hoover made the Commerce Department a clearinghouse of information. He recruited numerous academics from various fields and tasked them with publishing reports on different aspects of the economy, including steel production and films. To eliminate waste, he encouraged standardization of products like automobile tires and baby bottle nipples.[18][page needed] Other efforts at eliminating waste included reducing labor losses from trade disputes and seasonal fluctuations, reducing industrial losses from accident and injury, and reducing the amount of crude oil spilled during extraction and shipping. He promoted international trade by opening overseas offices to advise businessmen. Hoover was especially eager to promote Hollywood films overseas.[19]

His "Own Your Own Home" campaign was a collaboration to promote ownership of single-family dwellings, with groups such as the Better Houses in America movement, the Architects' Small House Service Bureau, and the Home Modernizing Bureau. He worked with bankers and the savings and loan industry to promote the new long-term home mortgage, which dramatically stimulated home construction.[20] Other accomplishments included winning the agreement of U.S. Steel to adopt an eight-hour workday, and the fostering of the Colorado River Compact, a water rights compact among Southwestern states.[21]

The department has always been involved in promoting international non-financial business.[22] It stations commercial attaches at embassies around the world. Currently the key sub agencies are the International Trade Administration, and the Bureau of Industry and Security. The ITA provides technical expertise to numerous American companies, helping them adjust to foreign specifications. It provides guidance and marketing data as well. The Office of Export Enforcement administers export controls, especially regarding the spread of nuclear technology and highly advanced electronic technology.[23] Under the administration of President Donald Trump, the policy has been to restrict high-technology flows to China. From 1949 to 1994, the department worked with the 17-nation Coordinating Committee on Multilateral Export Controls, which restricted technological flows to the Soviet Union and other communist nations. Since 1980, the Commerce Department works to neutralize the dumping of exports or the subsidies of overseas production. Along with the export controls this work continues to generate friction with other nations.[24]

The Department of Commerce was authorized a budget for Fiscal Year 2015 of $14.6 billion. The budget authorization is broken down as follows:[25]

On January 13, 2012, President Barack Obama announced his intentions to ask the United States Congress for the power to close the department and replace it with a new cabinet-level agency focused on trade and exports. The new agency would include the Office of the United States Trade Representative, currently part of the Executive Office of the President, as well as the Export-Import Bank of the United States, the Overseas Private Investment Corporation, the United States Trade and Development Agency, and the Small Business Administration, which are all currently independent agencies. The Obama administration projected that the reorganization would save $3 billion and would help the administration's goal of doubling U.S. exports in five years.[27] The new agency would be organized around four "pillars": a technology and innovation office including the United States Patent and Trademark Office and the National Institute of Standards and Technology; a statistical division including the United States Census Bureau and other data-collection agencies currently in the Commerce Department, and also the Bureau of Labor Statistics which would be transferred from the Department of Labor; a trade and investment policy office; and a small business development office. The National Oceanic and Atmospheric Administration (NOAA) would be transferred from the Department of Commerce into the Department of the Interior.[28] Later that year, shortly before the 2012 presidential election, Obama invoked the idea of a "secretary of business" in reference to the plan.[29] The reorganization was part of a larger proposal which would grant the president the authority to propose mergers of federal agencies, which would then be subject to an up-or-down Congressional vote. This ability had existed from the Great Depression until the Reagan presidency, when Congress rescinded the authority.[30]

The Obama administration plan faced criticism for some of its elements. Some Congress members expressed concern that the Office of the United States Trade Representative would lose focus if it were included in a larger bureaucracy, especially given its status as an "honest broker" between other agencies, which tend to advocate for specific points of view.[27][31] The overall plan has also been criticized as an attempt to create an agency similar to Japan's powerful Ministry of International Trade and Industry, which was abolished in 2001 after some of its initiatives failed and it became seen as a hindrance to growth.[31] NOAA's climate and terrestrial operations and fisheries and endangered species programs would be expected to integrate well with agencies already in the Interior Department, such as the United States Geological Survey and the United States Fish and Wildlife Service. However, environmental groups such as the Natural Resources Defense Council feared that the reorganization could distract the agency from its mission of protecting the nation's oceans and ecosystems.[32] The plan was reiterated in the Obama administration's FY2016 budget proposal that was released in February 2015.[33]