Advertisement - You can get this game from STEAM
Department of United States government
"USDA" redirects here. For other uses, see USDA (disambiguation).

The United States Department of Agriculture (USDA), also known as the Agriculture Department, is the U.S. federal executive department responsible for developing and executing federal laws related to farming, forestry, rural economic development, and food. It aims to meet the needs of farmers and ranchers, promotes agricultural trade and production, works to assure food safety, protects natural resources, fosters rural communities and works to end hunger in the United States and internationally.

Approximately 80% of the USDA's $141 billion budget goes to the Food and Nutrition Service (FNS) program. The largest component of the FNS budget is the Supplemental Nutrition Assistance Program (formerly known as the Food Stamp program), which is the cornerstone of USDA's nutrition assistance.[2]

The current Secretary of Agriculture is Sonny Perdue.[3]

Many of the programs concerned with the distribution of food and nutrition to people of America and providing nourishment as well as nutrition education to those in need are run and operated under the USDA Food and Nutrition Service. Activities in this program include the Supplemental Nutrition Assistance Program, which provides healthy food to over 40 million low-income and homeless people each month.[4] USDA is a member of the United States Interagency Council on Homelessness,[5] where it is committed to working with other agencies to ensure these mainstream benefits have been accessed by those experiencing homelessness.

The USDA also is concerned with assisting farmers and food producers with the sale of crops and food on both the domestic and world markets. It plays a role in overseas aid programs by providing surplus foods to developing countries. This aid can go through USAID, foreign governments, international bodies such as World Food Program, or approved nonprofits. The Agricultural Act of 1949, section 416 (b) and Agricultural Trade Development and Assistance Act of 1954, also known as Food for Peace, provides the legal basis of such actions. The USDA is a partner of the World Cocoa Foundation.

Harvey Washington Wiley, Chief Chemist of the Department of Agriculture's Division of Chemistry (third from the right) with his staff, not long after he joined the division in 1883

Early in its history, the economy of the United States was largely agrarian. Officials in the federal government had long sought new and improved varieties of seeds, plants and animals for import into the United States. In 1837 Henry Leavitt Ellsworth, a Yale-educated attorney interested in improving agriculture, became Commissioner of Patents, a position within the Department of State. He began collecting and distributing new varieties of seeds and plants through members of the Congress and agricultural societies. In 1839, Congress established the Agricultural Division within the Patent Office and allotted $1,000 for "the collection of agricultural statistics and other agricultural purposes."[6] Ellsworth's interest in aiding agriculture was evident in his annual reports that called for a public depository to preserve and distribute the various new seeds and plants, a clerk to collect agricultural statistics, the preparation of statewide reports about crops in different regions, and the application of chemistry to agriculture.[7] Ellsworth was called the "Father of the Department of Agriculture."[citation needed] 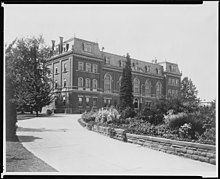 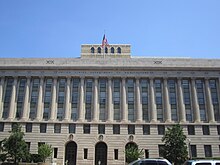 The Jamie L. Whitten Building in Washington D.C. is the current USDA headquarters.

On May 15, 1862, Abraham Lincoln established the independent Department of Agriculture to be headed by a commissioner without Cabinet status, and the agriculturalist Isaac Newton was appointed to be the first such commissioner.[9] Lincoln called it the "people's department."

In 1868, the department moved into the new Department of Agriculture Building in Washington, D.C. designed by famed DC architect Adolf Cluss. Located on Reservation No.2 on the National Mall between 12th Street and 14th SW, the department had offices for its staff and the entire width of the Mall up to B Street NW to plant and experiment with plants.[10]

In 1887, the Hatch Act provided for the federal funding of agricultural experiment stations in each state. The Smith-Lever Act of 1914 then funded cooperative extension services in each state to teach agriculture, home economics, and other subjects to the public. With these and similar provisions, the USDA reached out to every county of every state.[citation needed]

During the Great Depression, farming remained a common way of life for millions of Americans. The Department of Agriculture's Bureau of Home Economics, established in 1923, published shopping advice and recipes to stretch family budgets and make food go farther.[12] USDA helped ensure that food continued to be produced and distributed to those who needed it, assisted with loans for small landowners, and contributed to the education of the rural youth.[citation needed]

It was revealed on August 27, 2018, that the U.S. Department of Agriculture would be providing U.S. farmers with a farm aid package, which will total $4.7 billion in direct payments to American farmers. This package is meant to offset the losses farmers are expected to incur from retaliatory tariffs placed on American exports during the Trump tariffs.[13]

During the 2020 novel coronavirus (COVID-19) pandemic, Congress allocated funding to the USDA for the Coronavirus Food Assistance Program. This provided $16 billion for farmers and ranchers, and $3 billion to purchase surplus produce, dairy, and meat from farmers for distribution to cheritable organizations.[14] As part of the Coronavirus Aid, Relief, and Economic Security Act (CARES) and the Families First Coronavirus Response Act (FFCRA), USDA has up to an additional $873.3 million available in Section 32 funding to purchase a variety of agricultural products for distribution to food banks, $850 million for food bank administrative costs and USDA food purchases.[14]

USDA's offices and agencies are listed below, with full-time equivalent staff levels according to the estimated FY2019 appropriation, as reported in USDA's FY2020 Congressional Budget Justification. [1] 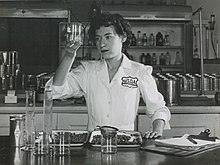 In 2015, then Secretary of Agriculture, Tom Vilsack expressed the desire to resign to President Obama. The Washington Post reports that he said "There are days when I have literally nothing to do," he recalled thinking as he weighed his decision to quit."[17] President Obama did not accept his resignation but assigned him additional tasks of combating opioid addiction, a task usually not assigned to the Department of Agriculture.[17]

Allegations have been made that throughout the agency's history its personnel have discriminated against farmers of various backgrounds, denying them loans and access to other programs well into the 1990s.[18] The effect of this discrimination has been the reduction in the number of African-American farmers in the United States.[19] Many black farmers across the nation experienced discrimination in their dealings with in-state USDA agencies. Across the nation, black farmers alleged, and the USDA later agreed, they were denied access to loans and subsidies provided by the government.[20] On a national level, farm subsidies that were afforded to white farmers were not afforded to black farmers.[21] Since they were denied government loans, emergency or disaster assistance, and other aid, many black farmers lost their farms and homes.[22]

In 1999, the USDA settled a class action lawsuit, the Pigford Case, alleging discrimination against African-American farmers in the late twentieth century. The government's settlement of nearly $1 billion with more than 13,300 farmers was reportedly the largest civil rights claim to date.[23] The 2008 Farm Bill provided for additional farmers to have their claims heard, as 70,000 had filed late in the original program.[23] In 2010 the federal government made another $1.2 billion settlement in what is called Pigford II for outstanding claims.[24]

Following long-standing concerns, black farmers joined a class action discrimination suit against the USDA filed in federal court in 1997.[24] An attorney called it "the most organized, largest civil rights case in the history of the country."[25] Also in 1997, black farmers from at least five states held protests in front of the USDA headquarters in Washington, D.C.[26] Protests in front of the USDA were a strategy employed in later years as the black farmers sought to keep national attention focused on the plight of the black farmers. Representatives of the National Black Farmers Association met with President Bill Clinton and other administration officials at the White House. And NBFA's president testified before the United States House Committee on Agriculture.[27]

In Pigford v. Glickman, U.S. Federal District Court Judge Paul L. Friedman approved the settlement and consent decree on April 14, 1999.[24] The settlement recognized discrimination against 22,363 black farmers but the NBFA would later call the agreement incomplete because more than 70,000 were excluded.[28] Nevertheless, the settlement was deemed to be the largest-ever civil rights class action settlement in American history. Lawyers estimated the value of the settlement to be more than $2 billion.[20] Some farmers would have their debts forgiven.[29] Judge Friedman appointed a monitor to oversee the settlement.[20] Farmers in Alabama, Mississippi, Arkansas, and Georgia were among those affected by the settlement.[30]

The NBFA's president was invited to testify before congress on this matter numerous times following the settlement including before the United States Senate Committee on Agriculture on September 12, 2000, when he testified that many farmers had not yet received payments and others were left out of the settlement. It was later revealed that one DoJ staff "general attorney" was unlicensed while she was handling black farmers' cases.[31] NBFA called for all those cases to be reheard.[32] The Chicago Tribune reported in 2004 that the result of such longstanding USDA discrimination was that black farmers had been forced out of business at a rate three times faster than white farmers. In 1920, 1 in 7 U.S. farmers was African-American, and by 2004 the number is 1 in 100. USDA spokesman Ed Loyd, when acknowledging that the USDA loan process was unfair to minority farmers, had claimed it was hard to determine the effect on such farmers.[33]

In 2006 the Government Accountability Office (GAO) issued a report highly critical of the USDA in its handling of the black farmers cases.[34] NBFA continued to lobby Congress to provide relief. NBFA's Boyd secured congressional support for legislation that would provide $100 million in funds to settle late-filer cases. In 2006 a bill was introduced into the House of Representatives and later the Senate by Senator George Felix Allen.[35] In 2007 Boyd testified before the United States House Committee on the Judiciary about this legislation.[citation needed] As the organization was making headway by gathering Congressional supporters in 2007 it was revealed that some USDA Farm Services Agency employees were engaged in activities aimed at blocking Congressional legislation that would aid the black farmers.[36] President Barack Obama, then a U.S. Senator, lent his support to the black farmers' issues in 2007.[37] A bill cosponsored by Obama passed the Senate in 2007.[38]

In early June 2008 hundreds of black farmers, denied a chance to have their cases heard in the Pigford settlement, filed a new lawsuit against USDA.[39] The Senate and House versions of the black farmers bill, reopening black farmers discrimination cases, became law in June 2008.[22] Some news reports said that the new law could affect up to 74,000 black farmers.[40] In October 2008, the GAO issued a report criticizing the USDA's handling of discrimination complaints.[41] The GAO recommended an oversight review board to examine civil rights complaints.[42]

After numerous public rallies and an intensive NBFA member lobbying effort, Congress approved and Obama signed into law in December 2010 legislation that set aside $1.15 billion to resolve the outstanding black farmers cases.[43] NBFA's John W. Boyd, Jr., attended the bill-signing ceremony at the White House.[citation needed] As of 2013, 90,000 African-American, Hispanic, female and Native American farmers had filed claims. It was reported that some had been found fraudulent, or transparently bogus. In Maple Hill, North Carolina by 2013, the number of successful claimants was four times the number of farms with 1 out of 9 African-Americans being paid, while "claimants were not required [by the USDA] to present documentary evidence that they had been unfairly treated or had even tried to farm." Lack of documentation is an issue complicated by the USDA practice of discarding denied applications after three years.[44]

Important legislation setting policy of the USDA includes the: