In 1926, Congress responded to the increasing number and complexity of customs cases by replacing the Board of General Appraisers with the United States Customs Court, an independent Article I tribunal, retaining the jurisdiction and powers of the Board of General Appraisers. In 1928, the United States Customs Court became the first federal tribunal in the United States to have a woman judge,[2] when President Calvin Coolidge nominated Genevieve R. Cline to the court.[3] Although many members of the United States Senate objected to Cline's appointment, both because of her sex, and because they believed she was self-taught and had no judicial experience, her supporters advocated strongly for her, including Katherine Pike, president of the National Association of Women Lawyers and a number of club-women. Cline won U.S. Senate confirmation on May 25, 1928, received her commission on May 26, 1928, and took her oath of office in the Cleveland Federal Building on June 5, 1928.[4]

On July 14, 1956, Congress made the United States Customs Court an Article III tribunal, again without changing its jurisdiction, powers, or procedures.[5] After making some procedural changes in the Customs Courts Act of 1970, Congress addressed substantive issues concerning the court's jurisdiction and remedial powers in the Customs Courts Act of 1980, which broadened the power of the court and renamed it the United States Court of International Trade.[1] 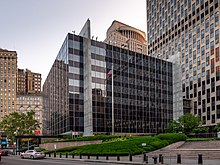 The James L. Watson Court of International Trade Building, located on Foley Square in lower Manhattan in New York City, houses the court. Also known as 1 Federal Plaza, it was built in 1968 adjacent to the Jacob K. Javits Federal Building.[6] In 2003, the building was named in honor of James L. Watson, a judge of the United States Customs Court from 1964 to 1980, and of the Court of International Trade from 1980 to 2001.[7]

The court possesses limited subject matter jurisdiction, meaning that it may hear only cases involving particular international trade and customs law questions. For example, the court hears disputes such as those involving protests filed with U.S. Customs and Border Protection, decisions regarding Trade Adjustment Assistance by the United States Department of Labor or United States Department of Agriculture, customs broker licensing, and disputes relating to determinations made by the United States International Trade Commission and the Department of Commerce's International Trade Administration regarding anti-dumping and countervailing duties.

There is one notable exception to the court's jurisdiction. In cases involving antidumping and countervailing duties imposed on Canadian or Mexican merchandise, an interested party can request that the case be heard before a special ad hoc binational panel organized under Chapter 19 of the 1994 North American Free Trade Agreement.

Most cases are heard by a single judge. If a case challenges the constitutionality of a U.S. law or has important implications regarding the administration or interpretation of the customs laws, then it may be heard by a three-judge panel. Many Judges of the Court of International Trade also regularly sit by designation on three-judge panels of the United States courts of appeals.

Current composition of the court

Former judges of the United States Court of International Trade

Former members of the Board of General Appraisers

Chief judges have administrative responsibilities with respect to the Court of International Trade, and preside over any panel on which they serve unless circuit judges are also on the panel. Unlike the Supreme Court, where one justice is specifically nominated to be chief, the office of chief judge rotates among the court judges. To be chief, a judge must have been in active service on the court for at least one year, be under the age of 65, and have not previously served as chief judge. A vacancy is filled by the judge highest in seniority among the group of qualified judges. The chief judge serves for a term of seven years or until age 70, whichever occurs first. The age restrictions are waived if no members of the court would otherwise be qualified for the position.

Under the Board of General Appraisers, the position of Chief Judge was entitled "President". When the office was created in 1948, the chief judge was the longest-serving judge who had not elected to retire on what has since 1958 been known as senior status or declined to serve as chief judge. After August 6, 1959, judges could not become or remain chief after turning 70 years old. The current rules have been in operation since October 1, 1982.