United States Court of Appeals for the Federal Circuit

Washington, D.C. List of federal judges appointed by Barack Obama Senior status
United States federal appellate court
Not to be confused with United States Court of Appeals for the District of Columbia Circuit.

The court occupies the Howard T. Markey National Courts Building, as well as, the adjacent Benjamin Ogle Tayloe House, former Cosmos Club building, and the Cutts-Madison House in Washington, D.C. on Lafayette Square. The court sits from time to time in locations other than Washington, and its judges can and do sit by designation on the benches of other courts of appeals and federal district courts. As of 2016[update], Washington and Lee University School of Law's Millhiser Moot Courtroom had been designated as the continuity of operations site for the court.[4] 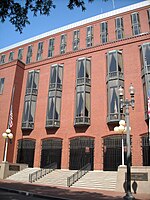 Although the Federal Circuit typically hears all appeals from any United States District Court where the original action included a complaint arising under the patent laws, the Supreme Court decided in Holmes Group, Inc. v. Vornado Air Circulation Systems, Inc. (2002)[6] that the Federal Circuit does not have jurisdiction if the patent claims arose solely as counterclaims by the defendant.[7] However, Congress changed the law in the America Invents Act of 2011, requiring the Federal Circuit to hear all appeals where the original action included a complaint or compulsory counterclaim arising under the patent laws. Thus, the Supreme Court's 2002 Holmes ruling no longer has the force of law.

Because the Court is one of national jurisdiction, panels from the court may sit anywhere in the country. Typically, once or twice a year, the court will hold oral arguments in a city outside of its native Washington D.C. The panels may sit in Federal courthouses, state courthouses, or even at law schools.

The judges of the Federal Circuit as of 2016

The Federal Circuit may have a total of 12 active circuit judges sitting at any given time, who are required to reside within 50 miles of the District of Columbia, as set by 28 U.S.C. § 44. Judges on senior status are not subject to this restriction. As with other federal judges, they are nominated by the President and must be confirmed by the Senate. Their terms last during the "good behavior" of the judges, which typically results in life tenure. When eligible, judges may elect to take senior status. This allows a senior judge to continue to serve on the court while handling fewer cases than an active service judge. Each judge in active service employs a judicial assistant and up to four law clerks, while each judge in senior status employs a judicial assistant and one law clerk.

Current composition of the court

Chief judges have administrative responsibilities with respect to their circuits, and preside over any panel on which they serve unless the circuit justice (i.e., the Supreme Court justice responsible for the circuit) is also on the panel. Unlike the Supreme Court, where one justice is specifically nominated to be chief, the office of chief judge rotates among the circuit judges. To be chief, a judge must have been in active service on the court for at least one year, be under the age of 65, and have not previously served as chief judge. A vacancy is filled by the judge highest in seniority among the group of qualified judges. The chief judge serves for a term of seven years or until age 70, whichever occurs first. The age restrictions are waived if no members of the court would otherwise be qualified for the position.

When the office was created in 1948, the chief judge was the longest-serving judge who had not elected to retire on what has since 1958 been known as senior status or declined to serve as chief judge. After August 6, 1959, judges could not become or remain chief after turning 70 years old. The current rules have been in operation since October 1, 1982.

The court has twelve seats for active judges, numbered in alphabetical order by their occupant at the time the court was formed, with the sole vacant seat being numbered last. Judges who retire into senior status remain on the bench but leave their seat vacant. That seat is filled by the next circuit judge appointed by the President.