It is best known in Spanish-language literature as Provincias Unidas del Río de la Plata ("United Provinces of the River Plate" i. e. River of silver), this being the most common (occasionally the official) name in use for the country until the enactment of the 1826 Constitution. The Argentine National Anthem refers to the state as "the United Provinces of the South". The Constitution of Argentina recognises Provincias Unidas del Río de la Plata as one of the official names of the country, referred to as "Argentine Nation" (Nación Argentina) in modern legislation.[1]

The United Provinces of South America were bordered on the south by the sparsely populated territories of the Pampas and Patagonia, home to the Mapuche, Ranquel and Puelche peoples. To the north, the Gran Chaco was populated by the Guaycuru nations. To the northwest, across the Upper Peru, lay the Spanish Viceroyalty of Perú. Across the Andes, to the west, was the Spanish-controlled Captaincy General of Chile. To the northeast was Colonial Brazil, a part of the Portuguese Empire (in 1815, the United Kingdom of Portugal, Brazil and the Algarves), later the Empire of Brazil in 1821.

The change from the Viceroyalty into the United Provinces was not merely a change of governors, but a revolutionary process that would replace the absolutist monarchy with a republic. The main influences in this were the Enlightenment in Spain, promoting new ideas, and the Peninsular War that left Spain without a legitimate king after the Abdications of Bayonne. The concept of separation of powers gradually became a tool to prevent despotism.[2](p12)

The new political situation generated great political conflict between the cities for two reasons. First, the vacatio regis removed the sovereignty from the King of Spain, but there was no clear view about who and how would be able to claim such sovereignty. Some people thought that it passed to other offices of the Spanish monarchy, while others held the notion of the retroversion of the sovereignty to the people: sovereignty returned to the people, who had now the right to self-governance. The vertical organization of the absolutist monarchy was compromised as well. Patriots thought that all cities, both in Spain and in the Americas, had the right to self-government, whereas Royalists assigned that right only to cities in European Spain, holding that the Americas should stay subject to the new government that Spain would provide.[2](p14)

The other source of conflict was the nature of the new governments, which declared themselves to be provisional during the King's absence but were making strong changes in the political organization. Unlike the First Republic of Venezuela, which declared independence early on, the United Provinces were faced with the inconsistency of acting like an independent state without actually having declared such independence.

See also: May Revolution and Argentine war of independence

The United Provinces of the Río de la Plata were established through a lengthy process that started in May 1810, when the citizens and militias of Buenos Aires, the capital city of the Viceroyalty of the Río de la Plata, ousted the Spanish Viceroy Baltasar Hidalgo de Cisneros in the May Revolution. Although there was not a formal declaration of independence at the time, and the government that emerged from the revolution declared loyalty to the deposed king Ferdinand VII, in fact it attempted to reorganise the social, political and economic structures of the Viceroyalty. As it faced immediate resistance in some quarters (namely the Banda Oriental, under self-proclaimed Viceroy Javier de Elío, Córdoba under former Viceroy Santiago de Liniers, the local government of Asunción in Paraguay and, notably, the royalist forces from the Viceroyalty of Perú), the revolution soon turned to be a War of Independence.

In the midst of the war of independence, during the entire 1810-1831 period there were serious conflicts among ever-changing factions regarding the organization of the state and the political aims of the revolutionary governments. These conflicts involved coups d'état, mutinies, politically motivated trials, banishments and imprisonments and finally developed into an outright civil war.

United Provinces in the 1820s as understood by political cartographers at the time. 1821: Carte physique et politique de l'Amérique méridionale.[3] 1822: The American Atlas by Carey & Lea. 1825: South America by Fisher.

Ever since the revolution, there were serious conflicts among diverging views regarding the political organization of the provinces. While some advocated a strong and executive central government with little accountability to the regional interests, a position at first favored by the "enlightened" revolutionary and independentist elements, others sought to integrate representatives from the provinces in a larger deliberative assembly. As the latter position gained the upper hand, the Primera Junta grew to incorporate delegates from the provinces in 1811. However, as it became evident that such an arrangement was not effective enough to lead the war efforts, a triumvirate assumed executive powers while the assembly retained some controlling functions.

Assembly of the year XIII 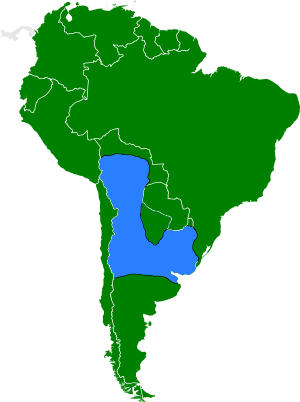 United Provinces represented at the 1813 Congress.
Main articles: Revolution of October 8, 1812; Second Triumvirate (Argentina); and Assembly of the year XIII
See also: Army of the North and Regiment of Mounted Grenadiers

The Liga Federal (1815–1820), or Liga de los Pueblos Libres (League of the Free Peoples), was an alliance of provinces in what is now Argentina and Uruguay, organised under democratic federalist ideals strongly advocated by its leader, José Gervasio Artigas.

The government of the United Provinces of South America felt threatened by the growing appeal of the Liga Federal, so they did nothing to repel the incoming Portuguese invasion of Misiones Orientales and the Banda Oriental, the stronghold of Artigas. Brazilian General Carlos Frederico Lecor, thanks to their numerical and material superiority, defeated Artigas and his army and occupied Montevideo on January 20, 1817, but the struggle continued for three long years in the countryside. Infuriated by the passivity of Buenos Aires, Artigas declared war on Buenos Aires while he was losing to the Portuguese.

On February 1, 1820, Federal League governors Francisco Ramírez of Entre Ríos and Estanislao López of Santa Fe, defeated a Supreme Directorship diminished army, ending the centralized government of the United Provinces, and established a federal agreement with Buenos Aires Province. Similarly, the Federal League effectively came to an end when its constituent provinces rejoined the United Provinces.

Artigas, defeated by the Portuguese, retreated to Entre Ríos. From there, he denounced the Treaty of Pilar and entered into conflict with his former ally governor Ramírez, who crushed the remnants of Artigas' army. The former Protector of the Free Peoples was exiled in Paraguay until his death. The Eastern Province was annexed by Portugal to its Brazilian dependences in 1821.

Anarchy of the year XX

War with Brazil and Independence of Uruguay

Resumption of the Civil War

Break up of the Viceroyalty of the Río de la Plata

The result of the wars was the independence of the provinces. Several new nations appeared:

Five provinces would go on to become Bolivia:

The Eastern Province (Provincia Oriental) became independent as Uruguay, partly retaining its old name in its official name: the Eastern Republic of Uruguay.

Misiones Orientales was de jure recognized as Brazilian, following the outcome of the Cisplatine War.

The United Provinces attempted to control the islands through commerce, granting fishing and hunting rights to Jorge Pacheco in 1824. Pacheco's partner Luis Vernet established a toehold in the islands in 1826 and a fledgling colony in 1828. He also visited the British consulate in 1826, 1828 and 1829 seeking endorsement of his venture and a garrison.[4](p48)[5] In 1829, he sought a naval vessel from the United Provinces to protect his colony but as none were available he was appointed Military and Civil Commander, prompting British protests.[4](p51)[6] Attempts to regulate fishing and sealing lead to conflict with the United States and the Lexington raid of 1831.[7] With the colony in disarray, Major Esteban Mestivier was tasked to set up a penal colony but was murdered in a mutiny shortly after arriving in 1832.[8](p50) Protests at Mestivier's appointment received no response and so the British dispatched a naval squadron to re-establish British rule.[8](p51)