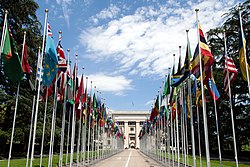 Principal organs of the United Nations[9]

The Security Council held its first ever session on 17 January 1946 at Church House, Westminster, London. Since its first meeting, the Council, which exists in continuous session, has travelled widely, holding meetings in many cities, such as Paris and Addis Ababa, as well as at its current permanent home at the United Nations Headquarters in New York City.

The United Nations Economic and Social Council (ECOSOC) is responsible for co-ordinating the economic, social and related work of 15 UN specialized agencies, their functional commissions and five regional commissions. ECOSOC has 54 members; it holds a four-week session each year in July. Since 1998, it has also held a meeting each April with finance ministers heading key committees of the World Bank and the International Monetary Fund (IMF). The ECOSOC serves as the central forum for discussing international economic and social issues, and for formulating policy recommendations addressed to member states and the United Nations System.[12]

The United Nations Secretariat is headed by the United Nations Secretary-General, assisted by a staff of international civil servants worldwide. It provides studies, information, and facilities needed by United Nations bodies for their meetings. It also carries out tasks as directed by the UN Security Council, the UN General Assembly, the UN Economic and Social Council, and other U.N. bodies. The United Nations Charter provides that the staff is to be chosen by application of the "highest standards of efficiency, competence, and integrity," with due regard for the importance of recruiting on a wide geographical basis.

The Charter provides that the staff shall not seek or receive instructions from any authority other than the UN. Each UN member country is enjoined to respect the international character of the Secretariat and not seek to influence its staff. The Secretary-General alone is responsible for staff selection.

The International Court of Justice is the primary judicial organ of the United Nations. It is based in the Peace Palace in The Hague, Netherlands. Its main functions are to settle legal disputes submitted to it by states and to provide advisory opinions on legal questions submitted to it by duly authorized international organs, agencies, and the UN General Assembly.

The United Nations Trusteeship Council, one of the principal organs of the United Nations, was established to ensure that trust territories were administered in the best interests of their inhabitants and of international peace and security. The trust territories—most of them are former mandates of the League of Nations or territories taken from nations defeated at the end of World War II—have all now attained self-government or independence, either as separate nations or by joining neighbouring independent countries. The last was Palau, formerly part of the Trust Territory of the Pacific Islands, which became a member state of the United Nations in December 1994.

Funds and programmes, research and training institutes, and other bodies

The separately-administered funds and programmes, research and training institutes, and other subsidiary bodies are autonomous subsidiary organs of the United Nations.[8]

Throughout its history the United Nations General Assembly has established a number of programmes and funds to address particular humanitarian and development concerns. These bodies usually report to the General Assembly through an executive board. Only one UN programme has ever closed in the history of the organization, the United Nations Relief and Rehabilitation Administration (UNRRA), which ceased to exist in 1959 and was subsequently replaced by the UNHCR.

The various research and training institutes were established by the General Assembly to perform independent research and training. One former institute, the International Research and Training Institute for the Advancement of Women (INSTRAW), was merged with other elements of the United Nations System into a new organization, UN Women, in January 2011.

Main article: List of specialized agencies of the United Nations

The specialized agencies are autonomous organizations working with the United Nations and each other through the co-ordinating machinery of the Economic and Social Council. Each was integrated into the UN System by way of an agreement with the UN under UN Charter article 57.[6]

Some organizations have a relationship with the UN defined by an arrangement different from the agreements between the specialized agencies and the UN, which are established under Articles 57 and 63 of the United Nations Charter.[13][14][15][16][17][18]

The IOM, established in 1951, is the leading inter-governmental organization in the field of migration and works closely with governmental, intergovernmental and non-governmental partners. IOM works to help ensure the orderly and humane management of migration, to promote international cooperation on migration issues, to assist in the search for practical solutions to migration problems and to provide humanitarian assistance to migrants in need, including refugees and internally displaced people. In September 2016, IOM joined the United Nations System as a related organization during the United Nations General Assembly high-level summit to address large movements of refugees and migrants.[19]

The CTBTO PrepCom reports directly to the UN General Assembly.[14]

The relationship between the IAEA and the UN was established by a resolution of the UN General Assembly. Unlike the specialized agencies which report to ECOSOC, the IAEA reports directly to the General Assembly as well as the Security Council and ECOSOC.[6] Like the other specialized agency's heads, their executives are part of the United Nations System Chief Executives' Board for Coordination (CEB).[6]

Organisation for the Prohibition of Chemical Weapons (OPCW)

The OPCW is not an agency of the United Nations, but cooperates both on policy and practical issues. On 7 September 2000 the OPCW and the United Nations signed a co-operation agreement outlining how they were to co-ordinate their activities.[20] Under this agreement, the OPCW reports to the UN General Assembly.[14]

The WTO does not have a formal agreement with the UN. Instead, their relationship is governed by exchanges of letters. Unlike the specialized agencies and the IAEA, the WTO has no reporting obligations towards any of the principal organs of the UN, but provides ad-hoc contribution to the work of the General Assembly and ECOSOC.[15] The WTO has a seat on the CEB.[6]

The United Nations Chief Executives' Board for Coordination (CEB) brings together on a regular basis the executive heads of the organizations of the United Nations System, under the chairmanship of the Secretary-General of the UN. The CEB aims to further co-ordination and co-operation on a whole range of substantive and management issues facing UN System organizations. In addition to its regular reviews of contemporary political issues and major concerns facing the UN System, the CEB approves policy statements on behalf of the UN System as a whole. Three committees report to the CEB, namely the High-level Committee on Programme (HCLP), the High-level Committee on Management (HCLM) and the United Nations Development Group (UNDG). Each of those bodies has, in turn, developed a subsidiary machinery of regular and ad hoc bodies on the substantive and managerial aspects of inter-agency co-ordination. The committee structure is supported by a CEB secretariat located in New York and Geneva.[21]