Enlarge Trust Territory of the Pacific Islands Territory of New Guinea
1940s–90s former colonies administered by mostly Western countries under UN mandate
Not to be confused with List of territories governed by the United Nations. 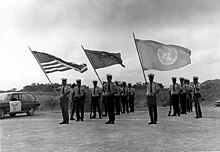 The one territory not turned over was South-West Africa, which South Africa insisted remained under the League of Nations Mandate. It eventually gained independence in 1990 as Namibia. The main objection was that the trust territory guidelines required that the lands be prepared for independence and majority rule.

All these territories previously were League of Nations mandates.

Arrival of UN Visiting Mission in Majuro, Trust Territory of the Pacific Islands (1978). The sign reads "Please release us from the bondage of your trusteeship agreement."

These territories were also former League of Nations mandates.