The United Nations Memorial Cemetery in Korea (UNMCK; Korean: 재한유엔기념공원; RR: Jaehahn yuen ginyeomgongwon),[10] located at Tanggok in the Nam District,[11] City of Busan,[nb 2] Republic of Korea, is a burial ground for United Nations Command (UNC) casualties of the Korean War.[nb 3] It contains 2,300 graves and is the only United Nations cemetery in the world. Laid out over 14 hectares (35 acres), the graves are set out in 22 sites designated by the nationalities of the buried servicemembers.[12]

A corporal from the 114th Graves Registration Co. fills out a Form 52B, giving information regarding a deceased American soldier at the U.N. Cemetery at Taegu. Nearby are a cross, a triangular unidentified soldier marker, and small bottle containing Form 1042 which is buried with the casualty. (US Army Photo, January 23, 1951)

Construction of the Tanggok cemetery

Construction of the United Nations Military Cemetery (UNMC) at Tanggok began on January 18, 1951 and was carried out by hand-labor over a 28.2 hectares (70 acres) site.[23] It was dedicated by General Matthew Ridgway on April 6, 1951.[14][23][24] Graves Registration units then concentrated American and allied remains at Tanggok before they were permanently buried or repatriated.[14][19] Besides burial services, refrigeration units to store remains were added,[23] as were cremation facilities.[25] Today the 2,300 graves in the cemetery are set out in 22 sites designated by the nationalities of the buried service members.[12]

Following the signing of the Korean Armistice Agreement in July 1953, the United Nations Command sought to recover bodies interred in North Korean territory.[26] Cemeteries for POWs in North Korea were established at 16 POW camps.[27] From September to October 1954, the resulting exchange of casualties, dubbed Operation Glory, between United Nations forces and the North Koreans resulted in 4,219 remains being recovered, of which 1,275 were non-US casualties.[28] (Also exchanged were the remains of approximately 14,000 North Korean and Chinese casualties.)[29] From 1950 to 1954, approximately 11,000 casualties were interred at UNMC, which was maintained by the United States Army Graves Registration Agency.[5][30][31]

Foundation as a United Nations cemetery and transfer to CUNMCK 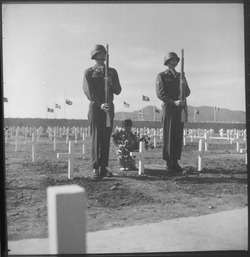 April 1951 – a Korean girl places a wreath of flowers while an honour guard present arms at the United Nations cemetery in Busan.

An Honour Guard from the Republic of Korea 53rd Division carries out flag ceremonies daily.[40]

The UN Sculpture Park was established in October 2001 and twenty-nine permanent memorials are in the cemetery.[41] The memorials include: 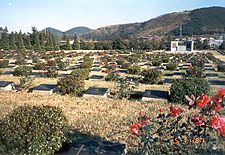 The cemetery contains the graves of 2,289 military personnel and 11 non-combatants. Amongst those are the graves of Bill Madden GC, 3rd Battalion, Royal Australian Regiment, (who died as a prisoner of war), Kenneth Muir VC (killed in action in the Battle of Hill 282 while serving with the Argyll and Sutherland Highlanders),[63] and Philip Curtis VC, Duke of Cornwall's Light Infantry (killed in action in the Battle of the Imjin River while serving with the Gloucestershire Regiment).[64] Also buried is Lt. Col. Charles Hercules Green DSO, commander of the 3rd Battalion, Royal Australian Regiment, who was mortally wounded at Battle of Chongju and died at nearby Anju.[65] Dutch Lt. Col. Marinus Petrus Antonius den Ouden, commander of the Regiment Van Heutsz, was killed in action during Operation Roundup in 1951 and is buried with members of his regiment—posthumously, den Ouden was awarded Netherlands' highest military award, the Military Order of William.[66] In the early days of the war, journalist Christopher Buckley died from a land mine explosion, and was subsequently buried at the cemetery.[67] Following his death in 2018, Korean War veteran and Victoria Cross recipient Bill Speakman was buried there in 2019.[68]

Between 1951 and 1954 there were about 11,000 burials of UN troops from 21 countries. As of 2012, there are 2,300 wards of eleven countries, including 36 of the Republic of Korea troops deployed to the United Nations military bases. Because burials of seven countries' graves were retrieved back to their homeland, including Belgium, Colombia, Ethiopia, Greece, Luxembourg, Philippines and Thailand.[69] The burials of British Commonwealth Forces Korea are located in United Nations Memorial Cemetery. The numbers are 885 British troops, in accordance with the English customs of the dead.[70]