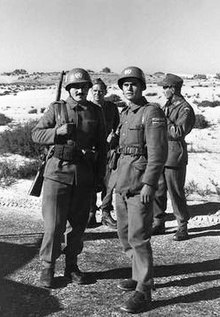 UNEF soldiers from the Yugoslav People's Army in Sinai, January 1957

The first United Nations Emergency Force (UNEF) was established by United Nations General Assembly to secure an end to the Suez Crisis with resolution 1001 (ES-I) on 7 November 1956. The force was developed in large measure as a result of efforts by UN Secretary-General Dag Hammarskjöld and a proposal and effort from Canadian Minister of External Affairs Lester B. Pearson, who would later win the Nobel Peace Prize for it. The General Assembly had approved a plan[1] submitted by the Secretary-General which envisaged the deployment of UNEF on both sides of the armistice line. The Second United Nations Emergency Force (UNEF II) deployed from October 1973 to July 1979.[2] 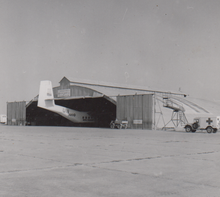 UNEF was the first UN military force of its kind, its mission was to:

... enter Egyptian territory with the consent of the Egyptian Government, in order to help maintain quiet during and after the withdrawal of non-Egyptian forces and to secure compliance with the other terms established in the resolution ... to cover an area extending roughly from the Suez Canal to the Armistice Demarcation Lines established in the Armistice Agreement between Egypt and Israel.

Since the operative UN resolutions were not passed under Chapter VII of the United Nations Charter, the planned deployment of a military forces had to be approved by Egypt and Israel. Israel's Prime Minister refused to restore the 1949 armistice lines and stated that under no circumstances would Israel agree to the stationing of UN forces on its territory or in any area it occupied.[5][6] After multilateral negotiations with Egypt, eleven countries offered to contribute to a force on the Egyptian side of the armistice line: Brazil, Canada, Colombia, Denmark, Finland, India, Indonesia, Norway, Sweden, and Yugoslavia. Support was also provided by United States, Italy, and Switzerland. The first forces arrived in Cairo on November 15, and UNEF was at its full force of 6,000 by February 1957. The force was fully deployed in designated areas around the canal, in the Sinai and Gaza when Israel withdrew its last forces from Rafah on March 8, 1957. The UN Secretary-General sought to station UNEF forces on the Israeli side of the 1949 armistice lines, but this was rejected by Israel.[7]

The mission was directed to be accomplished in four phases:

Due to financial constraints and changing needs, the force shrank through the years to 3,378 by the time its mission ended in May 1967.

On 15 May 1967, the Egyptian government ordered all United Nations forces out of Sinai effective immediately. Then Secretary-General U Thant tried to redeploy UNEF to areas within the Israeli side of the 1949 armistice lines to maintain buffer, but this was rejected by Israel.[8] In a decision that proved to be controversial, Thant acted to effect the Egyptian order without consulting either the Security Council or the General Assembly. Most of the forces were evacuated by the end of May, but 15 UNEF forces were caught in combat operations and killed in the Six-Day War, June 5–10. The last United Nations soldier left the region on June 17. 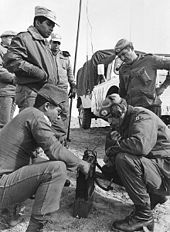 An image of Canadian and Panamanian UNEF UN peacekeepers in the Sinai, during 1974.

The second United Nations Emergency Forces (UNEF II) was established by United Nations General Assembly, in accordance with United Nations Security Council Resolution 340 (1973), to supervise the ceasefire between Egyptian and Israeli forces at the end of Yom Kippur War or October War, and following of the agreement of 18 January 1974 and 4 September 1975, to supervise the redeployment of Egyptian and Israeli forces and to man and control the buffer zones established under those agreements.[9]

The mandate of UNEF II was to supervise the implementation of United Nations Security Council Resolution 340 which demanded that an immediate and complete ceasefire between Egyptian and Israeli forces be observed and that the parties return to the positions they had occupied at 1650 hours GMT on 22 October 1973. The Force would use its best efforts to prevent a recurrence of the fighting, and in the fulfillment of its tasks it would have the cooperation of the military observers of the United Nations Truce Supervision Organization (UNTSO). UNEF II was also to cooperate with the International Committee of the Red Cross (ICRC) in its humanitarian endeavours in the area. The mandate of UNEF II which was originally approved for six months, until 24 April 1974, was subsequently renewed eight times. Each time, as the date of expiry of the mandate approached, the Secretary-General submitted a report to the United Nations Security Council on the activities of the Force during the period of the mandate. In each of those reports, the Secretary-General expressed the view that the continued presence of UNEF II in the area was essential, and he recommended, after consultations with the parties, that its mandate be extended for a further period. In each case, the Council took note of the Secretary-General's report and decided to extend the mandate of the Force accordingly. In October 1978, the mandate of UNEF II was extended a last time for nine months, until 24 July 1979.[10] The area of operation of the UNEF II was at Suez Canal sector and later the Sinai peninsula, with the headquarters located at Cairo (October 1973 to August 1974) and Ismailia (August 1974 – July 1979).[11] The deployment of forces as of July 1979 was as follows:

On August 9, 1974, Canadian Forces Buffalo 115461 was making a scheduled supply flight from Ismaïlia, Egypt to Damascus, Syria when it was shot down by Syrian surface to air missiles. Nine Canadians were killed, marking the worst ever single day of loss for Canadian peacekeepers.[15] August 9 is today commemorated annually as National Peacekeepers' Day in Canada.[16] A monument to this event has been erected in Peacekeeper Park in Calgary, Canada.[17]