The resolution was passed on the same day the Agreement on Disengagement[3] was signed between Israeli and Syrian forces on the Golan Heights, finally establishing a ceasefire to end the 1973 Yom Kippur War.

The Force has since performed its functions with the full cooperation of both sides. The mandate of UNDOF has been renewed every six months since 1974 (most recently until 31 December 2019).[4] UNTSO (United Nations Truce Supervision Organization) and UNDOF are operating in the zone and continue to supervise the ceasefire. Before the Syrian Civil War, the situation in the Israel-Syria ceasefire line had remained quiet and there had been no serious incidents.

During the Syrian Civil War, the buffer zone between Israeli and Syrian forces became a scene of the Quneitra clashes, forcing many UN observer forces to reconsider their mission due to safety issues. The fighting between Syrian Army and Syrian Opposition came to international attention when on March 2013, the al-Qaeda affiliated group Al-Nusra Front took hostage 21 Fijian UN personnel, who had been a part of the UN Disengagement Observer Force in the neutral buffer zone between Syria and Israeli-occupied territory.[5] According to a UN official, they were taken hostage near Observation Post 58, which had sustained damage and was evacuated the previous weekend, following heavy combat in close proximity at Al Jamla.[5] The UN personnel were later released with Jordanian mediation.

On 6 October 1973, in a surprise joint attack, Egypt attacked Israeli forces on the Suez Canal and in the Sinai while Syria attacked Israeli forces on the Golan Heights. Israel eventually repulsed the Syrian operation, and crossed the Suez Canal through a gap between Egyptian forces. Israeli forces then pushed further into Syria, and encircled elements of the Egyptian 3rd Army[6][7][8]. Fighting continued until 22 October 1973, when United Nations Security Council Resolution 338 called for a ceasefire. The next day the ceasefire was violated and fighting resumed, resulting in United Nations Security Council Resolution 339. This second ceasefire was violated as well; United Nations Security Council Resolution 340 ended the conflict on October 25, 1973. The conflict is known as the Yom Kippur War. The United Nations Emergency Force II moved into place between Israeli and Egyptian armies in the Suez Canal area, stabilizing the situation.

Resolution 339 primarily reaffirmed the terms outlined in Resolution 338 (itself based on Resolution 242). It required the forces of both sides to return to the position they held when the initial ceasefire came into effect, and a request from the United Nations Secretary-General to undertake measures toward the placement of observers to supervise the ceasefire.

Tension remained high on the Israel-Syria front, and during March 1974 the situation became increasingly unstable. The United States undertook a diplomatic initiative, which resulted in the signing of the "Agreement on Disengagement" (S/11302/Add.1, annexes I and II) between Israeli and Syrian forces. The Agreement provided for a buffer zone and for two equal areas of limitation of forces and armaments on both sides of the area. It also called for the establishment of a United Nations observer force to supervise its implementation. The Agreement was signed on 31 May 1974 and, on the same day, the UN Security Council adopted Resolution 350 to set up UNDOF.

On 3 June 1974 General Briceno from Peru arrived, from Cairo, at the headquarters of the UNTSO ISMAC House in Damascus and assumed operational command of all UNTSO Observers detailed to UNDOF. The first phase of the operation was manning the observation posts. The UNTSO observers were transferred to UNDOF on 1 June 1974 and were joined by advanced parties from both Austria and Peru on 3 June, with Canadian and Polish personnel transferred from UNEF II to the UNDOF Area of Responsibility.

From 6 June 1974 to 25 June 1974, the second phase, which included the physical disengagement of Syrian and Israeli forces, was initiated. The Austrians and Polish shared a base camp at Kanikir near the town of Sassa. The Peruvians were deployed south of Quneitra near Ziouani. The Canadian logistics company and signal element were situated in Ziouani near Quneitra. The force headquarters remained in Damascus.

When UNDOF was re-organized in 1993 (the Finnish Government had decided to pull its troops from UNDOF), the UNDOF HQ moved from Damascus to Camp Faouar, the Austrian base camp situated half-way between the Sassa checkpoint and Quneitra, some 60 kilometers from Damascus. 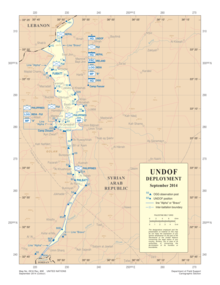 The buffer zone is about 80 km long, and between 0.5 and 10 km wide, forming an area of 235 km². The zone straddles the Purple Line, separating the Israeli occupied portion of the Golan Heights and the rest of Syria, where the west line is known as "Alpha", and the east line as "Bravo". The zone also borders the Lebanon Blue Line to the north and forms a border of less than 1 km with Jordan to the south.

Operationally, the Alpha Line was drawn in the west, not to be crossed by Israeli Forces, and the Bravo Line in the east, not to be crossed by Syrian Forces. Between these lines lies the Area of Separation (AOS) which is a buffer zone. Extending 25 km to either side is the Area of Limitation (AOL) where UNDOF, and Observer Group Golan (OGG) observers under its command, supervise the number of Syrian and Israeli troops and weapons. Inside the AOS, UNDOF operates with checkpoints and patrols. In the AOS, the two line-battalions are operating, in the northern part AUSBATT from the Mount Hermon massif to the region of Quneitra, and in the south POLBATT down to the Jordanian border.

Between Israel and Syria there is no official border crossing, but for the UN one crossing point exists near Quneitra, called "The A-Gate". Although the line battalions and HQ operate on the Syrian side, HQ POLBATT, one checkpoint position, and HQ LOGBATT are on the Israeli side, located in Camp Ziouani. Most of the Austrians served on the Syrian side and only a few who were members of the military police fulfilled their duties at the crossing point.

The terrain is hilly on the highlands within the Anti-Lebanon mountain range system. The highest point in the zone is at Mount Hermon (2814 m) on the Lebanese border. The lowest point is at the Yarmuk River at 200m below sea-level. 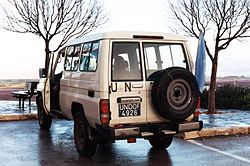 The UNDOF base near the Quneitra Crossing. 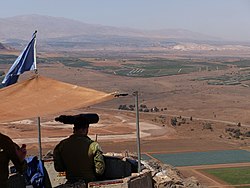 The initial composition of UNDOF in 1974 was of personnel from Austria, Peru, Canada and Poland, and later contingents have come from Iran, Finland, Slovenia, Japan, Croatia, India and the Philippines.[9] As of January 2020, about a thousand troops are provided by Nepal, India, Uruguay, Fiji, Ireland, and Ghana.[10] The troops are assisted by military observers from the United Nations Truce Supervision Organization's Observer Group Golan, along with international and local civilian staff. UNDOF is deployed within and close to the zone with two base camps, 44 permanently manned position and 11 observation posts. The operation headquarters are located at Camp Faouar and an office is maintained at Damascus. The Uruguayan battalion is deployed in the south with its base camp in Camp Ziouani. The Indian and Japanese logistic units perform second-line general transport tasks, rotation transport, control and management of goods received by the Force, and maintenance of heavy equipment. First-line logistic support is internal to the contingents and includes transport of supplies to the positions.

As of 2017[update], there have been 58 fatalities, including one civilian staff, since 1974.[11] On 9 August 1974, a Canadian Buffalo transport aircraft was on a routine re-supply flight, from Beirut to Damascus for Canadian peacekeepers in the Golan Heights. Flight 51 was carrying five crew members and four passengers: Capt G.G Foster, Capt K.B. Mirau, Capt R.B. Wicks, MWO G. Landry, A/MWO C.B. Korejwo, MCpl R.C Spencer, Cpl M.H.T. Kennington, Cpl M.W. Simpson and Cpl B.K. Stringer. All were members of the Canadian Forces. At 11:50, while on final approach into Damascus, the aircraft went down in the outskirts of the Syrian town of Ad Dimas, killing all on board. This remains the largest single-day loss of life in Canada's peace-keeping history.

On 13 October 2017, Major General Francis Vib-Sanziri of Ghana was appointed as Head of Mission and Force Commander of UNDOF. He succeeds Major General Jai Shanker Menon of India, whose assignment ended on 30 September 2017.[12]

In March 2013, 21 Philippine peacekeepers were held by a group of Syrian rebels who call themselves the Yarmouk Martyrs Brigade;[14] they were then released,[15] and returned to their base via Jordan and Israel on 12 March.[16]

On 10 May 2013, the Philippine Secretary of Foreign Affairs, Albert del Rosario announced his intentions to pull out their contingent of UN peacekeepers from the UNDOF zone. He suggested the risks in the area had gone "beyond tolerable limits". The announcement followed the kidnapping of four peacekeepers, shown on video to be kept as human shields by the Yarmouk Martyrs Brigade. The total Philippine contingent currently numbers 342, approximately one third of the entire unit.[17] On 6 June 2013 the Austrian chancellor Werner Faymann and Austrian foreign minister Michael Spindelegger announced that Austria would withdraw its troops from the UNDOF mission. This decision was made after Syrian rebels had attacked and temporarily captured the border crossing at Quneitra. A Filipino peacekeeper was wounded in the fighting.[18][19]

Ireland deployed 115 peacekeepers with UNDOF in September 2013 and are based in Camp Faouar. The Irish peacekeepers were attacked by Syrian rebels on 29 November 2013. The Irish convoy came under small arms fire and was hit with an explosion before the rebels retreated.[20] 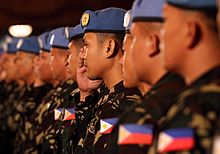 Philippine contingent to the Golan Heights

In recommending the current extension of the mandate, UN Secretary-General Ban Ki-moon observed that despite the present calm in the Israeli-Syrian ceasefire line, the situation in the Middle East was likely to remain tense. Until a comprehensive settlement was reached, the Secretary-General considered the continued presence of UNDOF in the area to be essential.

The town of Quneitra lies in ruins in 2001. Mount Avital in the Golan Heights overlooks the ruins.

The buffer zone is currently inhabited and is policed by Syrian authorities. There are several towns and villages within and bordering the zone, including the ruins of Quneitra. Land mines continue to pose a significant danger to UNDOF and the civilian population. The fact that the explosives have begun to deteriorate worsens the threat. Mine clearance is conducted by Austrian and Polish battalions, directed from the UNDOF headquarters.[24]

Members of UNDOF and UNTSO are usually the only individuals to cross the Israeli-Syrian ceasefire line through the zone. Since 1988, Israel has allowed Druze pilgrims to cross the ceasefire line to visit the shrine of Abel in Syria. In the Al Qunaytirah area, a company monitors the main roads leading into the AOS. Several times during the year Israel and Syria permit crossings of Arab citizens under the supervision of the International Committee of the Red Cross at an unofficial gate in the area. These people are pilgrims and students of the University of Damascus living in the Golan Heights or Israel. In 2005, Syria allowed a few trucks of Druze-grown Golan apples to be crossed. The trucks themselves were driven by Kenyan nationals.

Since 1967, brides have been allowed to cross the Golan border, but they do so in the knowledge that the journey is a one-way trip. This phenomenon is shown in the Israeli-Arab film The Syrian Bride.

The defunct Trans-Arabian oil Pipeline (Tapline) crosses through the southern half of the zone. Israel had permitted the pipeline's operation through the Golan Heights to continue since the territory came under Israeli occupation as a result of the Six-Day War in 1967. However, this section of the line beyond Jordan had ceased operation in 1976 due to transit fees disputes between Saudi Arabia and Lebanon and Syria, the emergence of oil supertankers, and pipeline breakdowns.